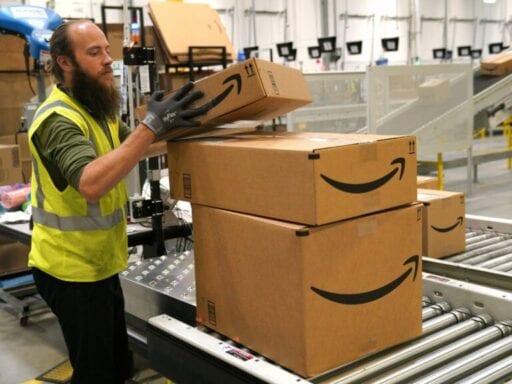 That’s the essence of the latest anti-trust investigation initiated by European regulators against an American tech giant. Margrethe Vestager, who runs the EU Competition Commission and has hit a bunch of Silicon Valley companies for a range of offenses, is worried about the following set of Amazon practices:

There’s nothing new about stores having house brands or about using their access to sales data to make decisions about what product categories to launch house brands in. What makes Amazon’s actions an antitrust matter is the presumption that the relevant market here is online retail, where Amazon is dominant even though it clearly isn’t a monopoly retailer overall.

These kinds of questions about market definition arise all the time in antitrust inquiries. In the United States, this whole line of argument would never get off the ground because Vestager’s core complaint is that Amazon is introducing new, cheaper competing products into the world — and American courts interpret the law according to a standard by which the goal of antitrust is to promote consumer welfare.

One downside to the European antitrust model is that can lead to outcomes that are bad for consumers. But one of the main things American antitrust lawyers really dislike about the European standard is that it leaves so much hanging on these fuzzy market definition questions.

In America, where you are expected to demonstrate quantifiable consumer harms, the market definition issues fall directly out of the consumer modeling.

I bring all this up because there’s a growing consensus in left-of-center circles that American antitrust enforcement has gone awry. They argue that while Democrats’ midterm policy agenda includes proposed antitrust reforms, there’s considerable ambiguity about what changes we are talking about.

One idea would be for the US to actually move to something more like the European system and abandon the consumer welfare standard.

Antitrust law and competition policy research Lina Khan’s work on Amazon has been very influential in the US over the past few years, and that’s essentially what she argues: Antitrust law ought to restrain Amazon’s relentless growth whether or not that relentless growth harms consumers, because you don’t want to wait until after all competition has been wiped from the face of the Earth to start regulating Jeff Bezos’s behemoth.

What’s gotten a lot less attention in the press, however, is the more plausible notion that one could substantially alter the antitrust status quo without taking a leap that large.

One possibility here is that the government could just get more skeptical about mergers for very conventional reasons. A few years back, US Air and American were allowed to merge in what I think everyone understood at the time to be something of a close call.

Looking back in retrospect, that was probably a mistake. It seems to have singlehandedly ended a two-generation trajectory toward cheaper airfares. Northeastern University economics professor John Kwoka’s retrospective assessment of recent mergers finds that this kind of mistake has been made often.

Relatedly, the government has arguably come to rely too much on hard-to-enforce “conduct remedies” to antitrust concerns, where companies are allowed to merge in exchange for promising to avoid doing this-or-that specific thing. This trend started because it was seen as less drastic than blocking mergers, but it’s turned out to be very hard to actually implement in practice.

Closer to the heart of digital economic concerns, policymakers should probably emphasize that whatever “consumer welfare” means it has to mean more than just prices. To say that simply that because Facebook and Google make their revenue from ads nothing at all they do can be anti-competitive seems like a clear mistake. That Facebook also owns Instagram and Whatsapp doesn’t raise prices, but it might compromise privacy or make advertising more intrusive or cause other harms.

Sen. Cory Booker (D-NJ) has called on regulators to explicitly consider both sides of markets, and look at whether concentration hurts workers as well as consumers, which seems reasonable.

Last, but by no means least, not every regulation needs to be antitrust regulation. A lot of the chatter around Facebook and Google speaks to the idea that the quality of the information environment has important non-economic dimensions that make it substantially different from the market for socks in terms of assessing the public interest.

I don’t have a super-specific proposal here, but to the extent that it’s the non-economic dimensions that we’re worried about, we may just want a whole parallel regulatory apparatus to address them, rather than trying to assuage our concerns through an antitrust backdoor.

July 27, 2016: Trump publicly asked Russia to find Hillary’s emails. They acted within hours.
How coronavirus is changing the ways we grieve and mourn the dead
Democrats are moving toward impeaching President Trump for his post-election conduct
Stephen Miller threw $80 worth of sushi away to protest a protester
Twitter bans Ilhan Omar’s GOP rival for tweeting about hanging the congresswoman
How to watch Kamala Harris’s historic vice presidential nominee acceptance speech