Amazon’s new area of domination: its own package delivery 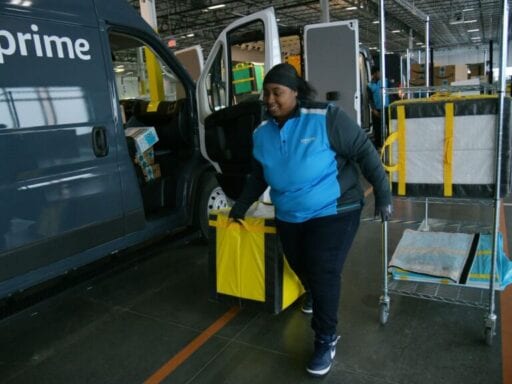 That growth has come with controversy.

There’s a reason your Amazon deliveries are increasingly showing up in an Amazon-branded van: The company’s own delivery network is already monstrous, and growing fast.

The online retail giant announced on Thursday that its Amazon Logistics division was on track to deliver 3.5 billion packages globally in 2019 — which accounts for approximately half of all of its worldwide orders, according to a spokesperson. (For comparison, UPS, which was founded 112 years ago, delivered 5.2 billion packages and documents for all of its customers in 2018.)

In the US alone, Amazon’s delivery network now handles the largest share of its customers’ orders — more than its traditional delivery partners UPS and the United States Postal Service each account for — the spokesperson added. That acknowledgment backs up a recent estimate from Morgan Stanley that Amazon Logistics was delivering 46 percent of all Amazon orders in the US, while a source previously told Recode that the US percentage has already hit 50 percent. A spokesperson declined to comment on that figure.

The huge growth of this new business line highlights the rapid pace at which Amazon is maneuvering its way into new corners of its customers’ lives. It also gives some credence to worries from business leaders, politicians, and activists alike that there are few industries safe from Amazon’s ambition and reach.

For Amazon, its investment in its own delivery network has been a priority in the US since the 2013 holiday season, when shipping partners like UPS were overwhelmed with Amazon shipments and an unexpected number of Amazon orders arrived late to customers after Christmas, creating a customer service nightmare.

Since then, the company has been building out a network of delivery stations that the company says employs 90,000 workers in the US alone, as well as a network of partner delivery companies that Amazon contracts with to deliver orders to customer doors on its behalf, often in Amazon-branded vehicles.

One of Amazon’s goals is to take more control over the delivery experience to try to avoid a replay of the 2013 fiasco, though there are still occasional holiday hiccups. Company executives have also told Wall Street analysts that bringing more deliveries in-house should eventually reduce the company’s shipping costs as well.

Amazon’s growing ambition in logistics has also led to controversy. Earlier this year, FedEx, Amazon’s smallest traditional delivery partner in the US, announced that it would not renew its contract to deliver products that Amazon sells itself. Then earlier this week, Amazon cited FedEx Ground performance when notifying a small subsection of its seller base they would temporarily be unable to ship Prime orders using the FedEx service.

Additionally, Amazon has begun offering a shipping service — dubbed Amazon Shipping — to merchants in some areas that would include non-Amazon deliveries as well, putting the company into direct competition with its current big partners like UPS and USPS. In these instances, Amazon would act in many ways like a traditional shipping company, handling everything from picking up orders at a merchant’s warehouse to executing the final delivery to their customer’s door. Morgan Stanley estimates that Amazon Logistics could be handling 1.5 billion to 3.5 billion non-Amazon packages by 2022, adding at least $7 billion in revenue to Amazon’s overall business.

Amazon’s employment practices related to its logistics arm have also come under fire. Today’s announcement boasted of the 90,000 US jobs that Amazon Logistics has created at its delivery facilities, but workers who help organize packages in at least three of the company’s US delivery stations have protested working conditions in just the last few months, filing labor complaints, walking off the job, and circulating petitions asking for paid time off.

Amazon’s network of delivery partners — and Amazon’s method for outsourcing liability to them in cases of accidents or worker injuries — is also coming under increased scrutiny in the wake of investigations by BuzzFeed News and ProPublica about deadly accidents allegedly brought on, in some cases, by aggressive Amazon delivery goals.

In its announcement about its Amazon Logistics employment numbers on Thursday, the company said it provides its partnering delivery companies with “driver training programs, branded delivery vehicles equipped with the latest safety technology, advanced telematics, a 24-hour safety helpline for drivers, and policies and mechanisms in place to ensure drivers are getting the required rest and breaks they need while out on the road.”

RSVP now to join Susan Choi in talking Trust Exercise with the Vox Book Club
Joe Biden has won. Here’s what comes next.
Want to fight climate change effectively? Here’s where to donate your money.
Laura Ingalls Wilder only had one good Thanksgiving in the Little House books
The battle for Latino voters in Arizona and Florida, explained
Mulan’s costumes are bright, dramatic, and (mostly) historically accurate