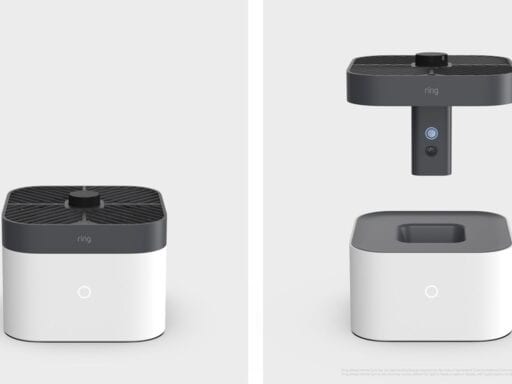 Share
Loading...
The Ring Always Home camera drone is meant to autonomously fly around the home and supposedly spot burglars.

The company just announced a tiny drone that can carry a Ring camera anywhere in your home.

Amazon has announced a new way for consumers to surveil their own homes: a camera-equipped drone that connects to Ring security systems. Ring, which Amazon owns, has a history of enabling controversial levels of surveillance in homes and neighborhoods. So the addition of a flying camera that can venture into new nooks and crannies is, at best, unsettling.

The Ring Always Home Cam is designed to fly around different areas of someone’s home every so often, capturing footage before landing back in its dock. The device is meant to stay indoors and fly autonomously based on pre-programmed flight paths that navigate between the walls of a house, a Ring spokesperson told Recode. The announcement comes after Amazon last year won a patent for a home surveillance drone; it’s also worth mentioning that the Federal Communications Commission (FCC) has not yet authorized the sale of this device.

Amazon says its new Ring surveillance drone is scheduled to go on sale in 2021 for $249 (once FCC authorization is obtained), and the company says it built in the product with “privacy in mind.” In a live blog of the virtual announcement event, Amazon said the Always Home Cam “only records when in flight; when it’s not in use it sits in a dock and the camera is physically blocked.” The company added that the drone is “loud enough so you hear when it’s in motion.” This is illustrated in a promotional video from Ring that shows a hypothetical robbery in which a burglar breaks into a man’s bedroom while the man is not home. The drone then chases off the burglar while the man anxiously watches the action through a smartphone app.

On its face, the new Ring drone might seem neat and futuristic, but it also serves as a reminder of the company’s checkered history with privacy and surveillance. Ring has long faced intense criticism over its existing security products, and those concerns only grew after Amazon acquired the company for $1 billion in 2018. One particularly sensitive issue is Ring’s vast and somewhat secretive network of police partnerships, which allow law enforcement to request footage collected by Ring cameras. Ring’s Neighbors app has also been accused of exacerbating racism and capitalizing on fear of crime. Meanwhile, many, including some members of Congress, are worried that the company will soon incorporate facial recognition into the Ring platform.

“The introduction of a roving drone security camera inside your own home potentially upends the idea of the very idea of home as a private place,” Matthew Guariglia, a policy analyst at the Electronic Frontier Foundation, told Recode in email. “Amazon’s new products certainly have the potential to extend what was already an invasive surveillance system into the realm of the absurd.”

While a Ring spokesperson told Recode that the Always Home camera footage cannot be requested by police, Amazon has not made a formal commitment not to allow police to request this footage in the future.

The announcement of the Ring drone arrives at a time when Amazon is also attempting to expand its products’ functionality in private and public spaces with an update to its Sidewalk project. As Amazon explains on its website, Sidewalk aims to create a shared network that could connect a suite of Amazon’s connected products for the home, like some of its Ring devices and Echo voice assistants. The effort is also meant to operate at a larger scale, potentially connecting devices throughout a neighborhood. For example, Amazon says that Sidewalk would enable certain Ring products to continue sending certain alerts even in the absence of a wifi connection. Eventually, the platform will promote “smart security” and even help find pets and valuables, the company said in a blog post on Monday.

“The Sidewalk Project has the potential to extend what is supposed to be home surveillance into community and neighborhood surveillance,” Guariglia said. “With all of these technologies, the individuals who purchase this equipment often are not asking how their neighbors feel about technology that could potentially extend the reach of networked smart devices, including those created for the purpose of recording and tracking well outside of their own property and into public spaces.”

So despite the advertised benefits of Amazon’s growing network of gadgets, the company is also setting itself up for more criticism over how these products also seem invasive or even Orwellian, especially as lawmakers face more pressure to regulate surveillance products and limit the technological capabilities of law enforcement.

Basically, it seems as though Amazon wants to be everywhere, and it’s working hard to get there. So even while every Ring product might seem useful — even cool — on its own, considered in the aggregate, Amazon is producing a constellation of connected products that could be repurposed to record and surveil us, whether through its microphone- and camera-equipped devices, like the Echo and the Echo Show, or the new Ring cameras for cars Amazon also announced on Thursday. And with each new device, Amazon seems to hold more of the cards, collecting not only data about what’s happening in our homes but in our neighborhoods, too. That may not be the future we want.

How a red state might hike taxes on the rich to give teachers a raise
How the coronavirus rumor mill can thrive in private group chats
Why the 2018 prison strike could be “one of the largest” in US history
Racial slurs and fat-shaming insults keep popping up on receipts. Is Trump worsening the trend?
Elizabeth Warren’s really simple case for breaking up big tech
The government is making it easier for “dark money” donors to go unnamed