America risks doing too little, not too much, to save the economy 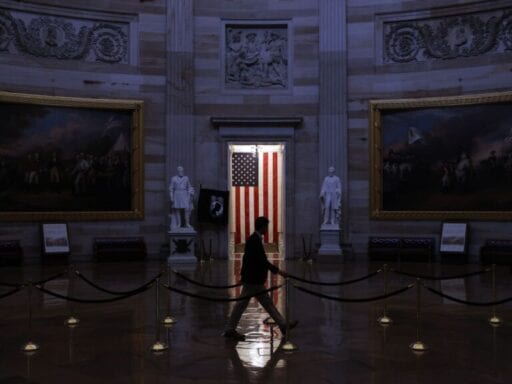 Share
Loading...
A man walks through the US Capitol rotunda on March 24 in Washington, DC, during negotiations for the CARES Act. | Chip Somodevilla/Getty Images

Two months into the thick of the coronavirus crisis, Washington haggles as the economy craters.

And yet, two months into the thick of it, Washington haggles as the economy craters.

Conservatives in Congress are worrying about being too nice to the unemployed and demanding protections for businesses that could be held liable for sickening or killing their workers. Millions of living people are without stimulus checks, but the IRS is trying to figure out how to get back checks that were accidentally sent to the dead.

Some Republicans have suddenly rediscovered their deep passion for guarding the deficit — you know, the one they gave up for that giant corporate tax cut in 2017. Oh, and by the way, those corporations that got the tax windfall? They need a $500 billion bailout. How could they have been expected to save up in anticipation of a pandemic?

But the low-paid essential workers and the people suddenly finding themselves out of a job? Well, that’s just a lesson for them on the importance of having a rainy-day fund. The same goes for the states and cities now in dire straits, or the small businesses that struggled to get loans and are already starting to worry about how to pay them back.

The country is facing an unprecedented crisis, and many legislators, policymakers, and people in power are now offering a tepid reaction. Congress has provided about $2.9 trillion in fiscal support, according to the Federal Reserve, and is going to need to do more in order to salvage the economy. But the White House has suggested a pause on further legislative stimulus, and as Democrats put forth a new proposal for a major legislative package, key Republicans aren’t eager to move ahead.

Things, they are bad. Unprecedentedly and extremely bad. The US leads the world in the number of confirmed coronavirus cases after having failed to get the virus under control. Tens of thousands of people have died, and thousands of daily deaths are expected into the summer.

Meanwhile, the economy, which government officials have put on pause to try to stop the spread of the disease, has plummeted. GDP shrank in the first quarter at its fastest rate since the Great Recession, and projections indicate that the worst is yet to come.

In April, the unemployment rate jumped to 14.7 percent, but even the Bureau of Labor Statistics has acknowledged that it’s likely closer to 20 percent.

More than 36 million people have filed new jobless claims in two months, and each week, millions of people are filing more. By comparison, during the last recession, 8.7 million total jobs were lost over the course of many months, and the highest week of losses was about 600,000.

“Our base case is that you don’t return to normal for a while and that we will see unemployment peak at over 20 percent, and then as you start to get to the end of 2021, you’re down to about 9 percent,” Bob Michele, chief investment officer at JPMorgan, told Bloomberg in a recent radio interview. Unemployment peaked at 10 percent during the Great Recession, and remember how bad that was. “There’s a lot of hardship ahead,” he warned.

Meanwhile, states and cities are sounding the alarm about billions of dollars in budget shortfalls they’re facing. Their expenses have skyrocketed due to the health crisis while their revenue sources have dissipated. States can’t run deficits; if the federal government doesn’t step in, they’ll be forced to make deep cuts to their spending, which will only harm the economy more. “The last recession felt like running down a hill,” Phoenix Mayor Kate Gallego recently told me. “This one feels like falling off a cliff, it happened so quickly.”

The government can and should do more, and fast

In a speech at the Peterson Institute for International Economics on Wednesday, Federal Reserve Chair Jerome Powell highlighted the actions that Congress and the Fed have taken to try to uplift the economy during the pandemic. Congress has provided nearly $3 trillion in fiscal support to households, businesses, health care providers, and state and local governments. The Fed has taken extraordinary actions as well; it’s cut interest rates to near-zero and announced a series of sweeping measures to boost the economy and ensure liquidity in the markets.

And still, he emphasized, there’s a need for more, and a grave risk to underreacting.

“The record shows that deeper and longer recessions can leave behind lasting damage to the productive capacity of the economy,” Powell said. Debt, unemployment, and shuttered businesses can weigh on the economy for years.

“At the Fed, we will continue to use our tools to their fullest until the crisis has passed and the economic recovery is well under way,” Powell said, though he cautioned the central bank can only do so much. “Additional fiscal support could be costly, but worth it if it helps avoid long-term economic damage and leaves us with a stronger recovery. This trade-off is one for our elected representatives, who wield powers of taxation and spending.”

Congress has thus far enacted three sweeping coronavirus-related packages, the last one being the Coronavirus Aid, Relief, and Economic Security Act, or the CARES Act, a $2.2 trillion stimulus package that President Donald Trump signed into law in March. Lawmakers have rolled out a variety of proposals and plans for potential legislation, and on Tuesday, House Democrats revealed their proposal for a fourth package, the $3 trillion HEROES Act, which will go to a vote on Friday. As Vox’s Ella Nilsen and Li Zhou explained, this is just an opening salvo from Democrats — some Republicans have signaled they don’t plan to spend more without making cuts elsewhere.

But is now really the time to worry about the deficit, especially when interest rates are low and the economy is in such disarray? As Vox’s Matt Yglesias laid out, one huge way to boost the economy right now is to “just spend the damn money.”

It will be worth it in the long run if Congress sends money to people who need it, gives full support to the states, and shores up small businesses. Officials have to think beyond the liquidity problem — the actions taken to keep the economy afloat now — and make sure the country doesn’t have a sustained solvency problem, where demand is so diminished it can’t bounce back.

The risk of inaction is bigger than the risk of overreaction

Charlie Anderson, an adviser to Sen. Michael Bennet (D-CO), worried on Twitter that “we’re about to watch a slow-motion train wreck” in the country. “From up close, it feels like we are sleepwalking toward a gut-wrenching, painful failure,” he wrote. “Many are really trying to shake the system awake. But inertia feels like it’s taking us inevitably toward a half-hearted, incoherent response.”

The country has seen what happens when government response falls short — now and in recent history.

As Vox’s Ezra Klein recently wrote, 60 days into the coronavirus crisis, the US has no coordinated plan of action, or even a stated goal. “It is not that the president is doing the wrong thing — he is doing basically nothing,” Klein wrote. “But he has combined a substantive passivity with a showman’s desire to dominate the narrative and a political street fighter’s obsession with settling scores, so he is making the job of governors and mayors harder, neither giving them what they need to beat the virus nor leaving them to make their own decisions free from his interference and criticism.”

Some states have begun to gradually reopen, but their economies aren’t bouncing back. It turns out people are not eager to crowd into restaurants and hop on planes while a deadly disease circulates. In other words, just ignoring the crisis and hoping for the best doesn’t fix it.

The current inaction has led to a flailing economy and a deadly pandemic with no end in sight.

And after the global financial crisis and Great Recession, America experienced how long and terrible a slow recovery can be. It took years for unemployment to get to where it was pre-recession, and even then, wages remained stagnant. State funding for higher education, K-12 education, and local aid was still down even years later.

The worse off the economy is allowed to become during the current crisis, the slower the recovery will be if and when it ends. Jobless workers and closed businesses will drag everything down. Congress can do a lot to try to soften the blow, the question is whether it will, or if instead the country is doomed to spiral even more.

Border arrests dropped in August. That doesn’t mean the crisis is over.
3 renters on getting screwed over by landlords during the Covid-19 housing crisis
Why Wall Street was never really afraid of Bernie Sanders
New Girl is 146 episodes of quirky comedic enjoyment, and it’s all on Netflix
She was slut-shamed while running for office. Now she’s fighting back.
The controversy over Biden not holding a formal press conference, explained