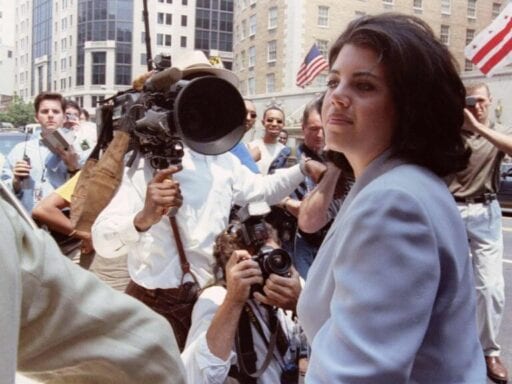 The season will launch just six weeks before the 2020 presidential election.

FX’s Emmy-dominating American Crime Story franchise — of The People vs. O.J. Simpson and The Assassination of Gianni Versace fame — has finally announced its third installment, and it’s a doozy: Bill Clinton’s impeachment proceedings in 1998 and 1999. And the new season will premiere on Sunday, September 27, 2020. That’s just six weeks before the 2020 presidential election.

Despite 2018 reports that producer Ryan Murphy had lost interest in the idea of doing a season about Clinton’s impeachment, FX announced the news during its sessions at the 2019 Television Critics Association summer press tour. The network also announced that the season will be adapted by playwright Sarah Burgess (whose play Dry Powder made complex financial topics easy to understand). The season is based on the book A Vast Conspiracy: The Real Story of the Sex Scandal That Nearly Brought Down a President by Jeffrey Toobin, whose earlier book The Run of His Life inspired The People vs. O.J.

Perhaps most intriguing are the season’s early casting choices. Murphy mainstay Sarah Paulson (she won an Emmy for playing Marcia Clark in The People vs. O.J.) will play Linda Tripp, who taped Monica Lewinsky’s confessions of her affair with President Clinton. Lewinsky herself will be played by Beanie Feldstein (Lady Bird, Booksmart), while Paula Jones, who accused Clinton of sexual harassment, will be played by Tony winner Annaleigh Ashford.

To say much more would be reading tea leaves, but I do so enjoy reading tea leaves. The presence of Burgess as the season’s writer, the presence of Lewinsky as a producer, and the fact that the first three actors cast are all playing women who were embroiled in the scandal and — in the case of Lewinsky — came to feel on at least some level that their concerns and accusations were exploited by a Republican Party that was thirsty to push Clinton out of office suggests that the story won’t center on Clinton, but instead focus on larger questions of power, politics, and gender.

Indeed, FX Networks President John Landgraf more or less confirmed as much at his executive session when he said the season’s story would be told from the point-of-view of the women swept up in the Ken Starr investigation.

Telling the story of Clinton’s impeachment is a calculated risk for FX and the American Crime Story team, since Americans might be pretty burnt out on politics in the homestretch of the 2020 election. But in a world where members of the opposition party regularly call for the president to be impeached and in a world where the sitting president’s sexual improprieties regularly make headlines, it’s a risk that just might pay off.

Or it could thrust Bill Clinton back into the news and give Donald Trump something to yell about at rallies. But that’s all for us to worry about in the future! Please join us in late September 2020 — a place we are going whether we like it or not — to find out.

Vox Sentences: Dimissioni
DHS is holding migrant children in secret hotel locations and rapidly expelling them
Paul Manafort’s solitary confinement includes a personal laptop, phone, shower, and workroom
Trump will reunite separated families — but only if they agree to deportation
2018 Republican nominees don’t want to talk about Trump
John Lewis and the beginning of an era