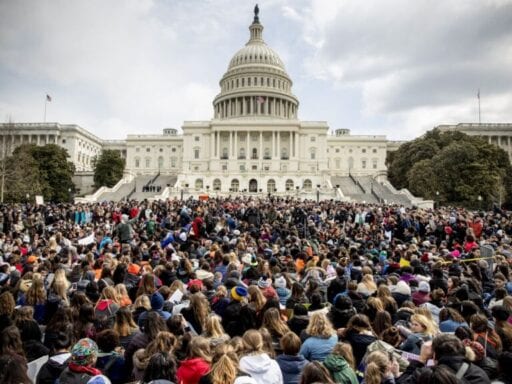 Share
Loading...
A rally outside the US Capitol Building on March 14, 2018. Students walked out of school to protest gun violence. | Andrew Harnik/AP

A huge — and growing — source of bias in the political system.

Democrats have a Senate problem, and not just in the sense that Republicans currently hold the majority or that the prospect of that changing in 2020 is relatively slim. The problem is that the odds of ever changing it are slimmer than is generally realized.

Data for Progress, a progressive think tank and advocacy organization, is trying to raise alarm bells about the issue. In a new memo, co-founder Colin McAuliffe writes that “the Senate is an irredeemable institution” that’s biased 3 percentage points in the GOP’s favor and systematically underweights the interests of nonwhite Americans.

Of course, the fact that the Senate gives extra weight to the interests of people who live in low-population states is not news. That’s an undemocratic, inegalitarian principle that was deliberately baked into the Senate from its inception. What’s new is that changes in American life have made its disproportionality more consequential.

A key issue is race. As the US has gotten more diverse, that diversity has spread throughout the country unevenly. It’s not impossible for a state to be both small and diverse (Hawaii) or even small and heavily urbanized (Rhode Island), but lower-population states tend to be whiter, more rural, and less educated than average. The result is a system of “racism by proxy” that overweights the interests and opinions of white voters over those of black, Hispanic, and Asian voters.

The growing polarization of the white vote along the lines of population density and educational attainment has also supercharged the once-modest partisan skew of the Senate, making even the most popular changes to health care or minimum-wage policy an extremely heavy lift.

The result is a growing problem that progressives have few if any real ideas for fixing.

The largest state, in other words, was about 12.6 times as big as the smallest state, and the ratio was even lower among free people.

Today, the smallest state is Wyoming, and the state of Washington has about 12.6 times as many people. Of course, Washington isn’t the largest state. Indeed, it’s not even particularly close — 12 states are bigger. Illinois has 22 times Wyoming’s population. Texas is nearly 50 times as big (and growing fast). And California is a stunning 68 times as large.

These are enormous disparities to live with as essentially a matter of historical happenstance. Not only was the Connecticut Compromise defining Senate representation a hard-nosed plan that didn’t reflect any clear larger principle, the boundaries of the states themselves were not drawn the way they are today for any particularly far-sighted reason.

If California had been carved up into Massachusetts-sized states, it could be easily 15 or 16 separate entities — each with about four times the population of Wyoming — rather than the current mismatch. When currently big states like Texas, Illinois, Florida, and California were admitted to the Union, their populations were not particularly large, and there was no specific intention to downweight their residents.

As of the 1860 US census, for example, Texas and California both had fewer residents than Maine, and Vermont was bigger than Minnesota or even Florida.

For most of America’s history, meanwhile, nonwhite participation in the political process was suppressed so dramatically that the racial skew of the Senate was a non-issue. In the contemporary US, that’s not the case — America’s large and growing nonwhite minority enjoys, in theory, equal citizenship rights. But today’s Senate overrepresents white voters and significantly underrepresents nonwhite ones.

Note that this is the opposite of the Senate’s small-state bias serving to correct some kind of potential “tyranny of the majority” problem. The underrepresented groups in the Senate process are the potentially vulnerable minority populations that might be in need of protecting. Even in an egalitarian system, whites would be a clear majority of the voting population, with noncollege-educated whites accounting for the largest voting bloc. And with the partisan preferences of the white electorate increasingly polarized along educational and urban/rural lines, that’s giving the Senate a sharper and sharper partisan skew.

The Senate’s skew is now a big deal for partisanship

The disproportionality of the Senate has long mattered in American politics. But it didn’t matter in a particularly partisan way until recently. Overrepresentation of rural voters manifested itself mostly in bipartisan support for things like farm subsidies, the Universal Service Fee that’s charged on phone bills, the Essential Air Service, and other relatively small-bore ways in which the federal government caters to rural interests.

But the drift of white, working-class voters into the Republican camp has increased the scale of the tilt.

It’s perhaps not surprising, then, that the deliberately gerrymandered House districts favored Trump even more than the Electoral College. But the “natural” gerrymander of the Senate was even more extreme.

That partisan skew has emerged so rapidly that it is, at times, tempting to dismiss it — Democrats held the Senate majority from 2007 to 2014 based on strong results in 2006 and 2008. But the non-college-educated white vote has been shifting rightward at a rapid clip even as the overall country has diversified, meaning the partisan skew has grown considerably more severe in recent years.

Rather than the country’s growing diversity offering a path out of this bind, it only underscores the fact that the skew is likely to grow as well, with the non-college-educated white share of key Midwestern swing states remaining higher than the national average.

This is a big problem for Democrats in the Electoral College in 2020, but in the long term they can expect the balance of power there to shift as big states like Texas and Georgia become swing states that carry huge electoral prizes. In the Senate, however, that can’t nearly compensate for the rightward drift of not only the key Midwestern Electoral College swing states, but also nearby Minnesota as well as smaller, super-white states like New Hampshire and Maine.

And there’s simply no obvious solution inside the bounds of existing constitutional politics.

A problem with no clear solution

The most widely discussed idea for changing this is to grant statehood to the District of Columbia, thus creating a new state with a large nonwhite population and an overwhelming partisan tilt toward Democrats.

The idea has some considerable merits, though as McAuliffe’s Data for Progress memo points out, it hardly works to unskew the Senate’s racial bias. Indeed, it actually serves to further dilute the Hispanic population’s voting power while increasing the modest overrepresentation of white college graduates.

Going further and making Puerto Rico a state also helps to address that concern, though only partially so. It also raises perennial questions as to whether Puerto Ricans want statehood, a desire that’s much clearer in DC’s case.

In addition to adding states, Data for Progress calls for “nonelectoral forms of activism to combat unjust policies enacted by a government that was designed to favor one segment of the electorate at the expense of all others.” The think tank simply asks thoughtful people to participate in efforts to delegitimize the existing setup, arguing that “anyone who attempts to defend the Senate as an institution must explain why its supposed merits justify why the vote of a white person should have more weight to it than the vote of a person of color.”

In practical terms, however, creating new states would require Democrats to win a Senate majority first. And that means thinking seriously about the geographic skew of public opinion.

Nobody likes to be told that they need to curtail their policy ambitions to meet a cynical electoral calculus. But you can’t take the politics out of politics, and being mindful of public opinion is part of any reasonable strategy for winning elections.

Part of what makes the current situation difficult to cope with, however, is that it’s one thing for elected officials to shy away from commitments that are clearly unpopular (like same-sex marriage in 2006). It’s another thing entirely to avoid positions that actually are popular but just don’t play well on a skewed electoral terrain. Nevertheless, the fact remains that rural whites’ generally conservative views — especially on topics related to immigration and gun control — are given exaggerated power in the electoral process.

The only viable way to start curbing that exaggerated power is by catering to those views to win the elections necessary to reform the system.

Activists want to turn Brett Kavanaugh’s nomination into another health care debate
Getting to 100% renewables requires cheap energy storage. But how cheap?
Trump tried to get E. Jean Carroll’s lawsuit dismissed. It didn’t work.
What we get wrong about misogyny
Sundance Film Festival 2019: movie reviews and news
From Key & Peele to Us: how Jordan Peele’s comedy evolved into groundbreaking horror