American Factory, the first film in the Obamas’ Netflix slate, is one of the year’s best docs 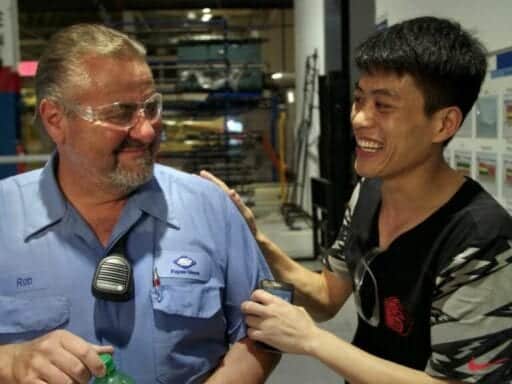 The fly-on-the-wall look at a former GM factory in Dayton bought by a Chinese company is a fascinating peek into the challenges of globalization.

The premise: In December 2008, the last truck rolled off the assembly line of the GM plant in Dayton, Ohio. Thousands of people were out of work. Then in 2014, a Chinese company reopened the factory and rehired a workforce to make automotive glass. American Factory is a documentary about the factory’s reopening, and the cultural clashes that put some bumps in the road. (It’s also the first film from Higher Ground, Barack and Michelle Obama’s production company, which has partnered with Netflix to distribute a slate of programming.)

What it’s about: Directed by veteran documentarians Steve Bognar and Julia Reichert, American Factory follows along — mostly in a fly-on-the-wall fashion — as the closed GM factory in Dayton is reopened as Fuyao Glass America, the US branch of a Chinese company that manufactures automotive glass. Daytonians who struggled after they were laid off from GM rejoice when they are rehired by the new company, but soon find that their expectations about labor practices and corporate culture clash with the new management’s ideals.

The film tracks American and Chinese workers and managers through a years-long period of adjustment, some of it quite rocky. At times, it’s a bit humorous; differences in American and Chinese ideas about loyalty to your employer, safety on the factory floor, working overtime, and much more come to the foreground. And when the workers at Fuyao Glass America decide to unionize, trouble is ahead.

Reichert (whose 50-year career in documentary film has often examined the American working class) and Bognar knew what they were doing in choosing this factory for the film. They live in Dayton, and in their 2009 short documentary The Last Truck, they captured the closing of the GM plant and its effects on the community, mostly through interviews with workers who were losing their jobs.

So it was familiar and personal terrain to them, and they spent years on the floor at the factory with their team to capture a well-rounded view of what happened that neither demonizes nor glosses over the conflicts. They train their cameras on not just the people but the tasks and materials of the job, giving audiences less familiar with the factory floor an idea of just how complicated and difficult the work is, and how valuable skilled labor is as well. American Factory tackles the challenges of globalization with much more depth and nuance than most reporting on the topic, precisely because it steps back to watch a story unfold over time and resists easy generalizations. It’s both soberly instructive and fascinating.

Critical reception: American Factory has a Metacritic score of 76 out of 100. At Variety, Peter Debruge writes that “American Factory is anything but a dry documentary, and will likely be a prime contender in awards season.”

How to watch it: American Factory begins streaming on Netflix on August 21.

Rudy Giuliani doesn’t get how coronavirus works. Fox News showcased his misinformation anyway.
Ilhan Omar’s tweet revealed core truths about anti-Semitism in America
How travel agencies avoided extinction and became a luxury service
Life Itself is a disaster of a movie, caught in a web of its own privilege
Honesty first: how to make politicians pay for lying
The First Purge completes the franchise’s transition to full-on social horror