American Horror Story: 1984 puts the camp back into teen slashers 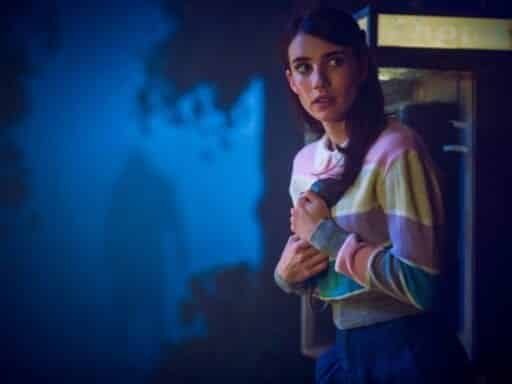 The season nine premiere gave classic ’80s horror tropes a workout. (Because aerobics, get it?!)

“Camp Redwood,” the first episode of the new season of American Horror Story, subtitled 1984, takes us back to the ‘80s and back to summer camp — with an emphasis on camp.

The anthology series’ blend of horror and camp, where over-the-top fear meets over-the-top social behavior, has always been one of its greatest assets. What makes 1984 great, right out of the starting gate, is that showrunners Ryan Murphy and Brad Falchuk know that no decade has ever married horror and camp more effectively than the 1980s. From its nearly orgiastic societal frenzy over Satanic Panic, right down to its decadent, zany teen slasher movies, no decade was more surreally performative about its fears.

Capitalizing on the recent nostalgia for ’80s horror present everywhere from Stranger Things to It, 1984 returns us to that era for an opening episode that references everything from a host of well-known horror films to real-life ’80s phenomena, like serial killer Richard Ramirez. “Camp Redwood” is a far-fetched and fun start to the season, delivered with American Horror Story’s typical winking reverence to horror tropes of yore. It’s a quintessential ’80s horror throwback — and hopefully one that will dig deeper into the era’s tropes as the season progresses.

1984’s story takes a bunch of familiar ’80s horror tropes and throws them into the bubbling cauldron of high drama and stylized gore that American Horror Story fans should well be familiar with by now. Series regular Emma Roberts is back once again, and in a switch from her usual amoral blonde goth, this time she’s playing the sweater-wearing virgin who usually doubles as the final girl of the classic teen slasher movie.

Roberts’s Brooke is pointedly missing a backstory, but she’s got a healthy sense of paranoia that saves her when she’s abruptly attacked by Richard Ramirez, the notorious “night stalker” who terrorized Los Angeles during the summer of 1984. She fends him off with a frying pan while he invokes Satan and promises that he’ll find her again.

Brooke has only recently moved to LA but she’s quickly befriended by a group of typical young adult stock characters. There’s Montana, the aerobics-obsessed, heavily eyeshadowed sexpot (played by another AHS regular, Billie Lourd); Chet, the bitter jock who was almost an Olympian (played by actual Olympic skier Gus Kenworthy); Ray, the group’s basic stuck-with-these-white-people-and-not-sure-how-he-feels-about-it peacemaker (DeRon Horton); and Xavier (Cody Fern), the Method actor who’s so serious about his craft that he takes a job at an upstate summer camp instead of acting in commercials, leading the rest of them into a classic scenario where deranged killers are on the loose and psychosexual morality tales play out deep in the woods.

It’s the same setting where, 14 years ago, a Vietnam vet with a taste for carnage broke into the camp and slaughtered a group of teens. The only survivor, Margaret (Leslie Grossman), grew up to purchase the camp in the hope she could reopen it and erase her horrible memories. But news of its reopening prompts the killer, hilariously dubbed “Mr. Jingles,” (John Carroll Lynch) to break out of the local mental institution, Michael Myers-style, and menace the group, which now includes camp nurse Rita (Angelica Ross) and musclebound counselor Trevor (Matthew Morrison).

Like most recent ’80s homages, this one is full of vintage Easter eggs

Long before we even arrive at Camp Redwood, 1984 plunges us into the quintessential ’80s moment by focusing on the most ’80s craze of all: aerobics. An extended credits scene introduces the season’s main characters in freeze frames during the middle of a leg-warmer-filled workout session, complete with cheesy graphics and heavy synth music. It’s all very on point.

From there, the premiere fills with ’80s hallmarks: big hair and even bigger glasses, the obligatory soundtrack of INXS and Rockwell, telephone booths that cost a quarter, men wearing short shorts. Then we’re transported to Camp Redwood via a green-and-orange-striped van. It’s all quite nostalgic — if you discount the real ’80s serial killer tossed into the mix.

Between the frequent discussion of aerobics and the frequent discussion of the 1984 summer Olympics, one of the episode’s dominant themes is fitness, which is weird enough that it’s kind of interesting. It allows for a hilarious cross-cut sequence between archival footage of runners in the real 1984 Olympics opening ceremonies and shots of Brooke running haplessly through the woods as she’s chased by Mr. Jingles.

American Horror Story has always been a horror trope fest, and 1984 upholds that tradition. This season, the teen slasher movie will get its due, and “Camp Redwood” starts strong with references to the pioneering summer camp massacre movie, Friday the 13th, and to Halloween’s serial killer asylum escapee (at one point a famous Halloween murder is briefly recreated). There’s also a significant homage to one film that post-dates the era we’re in: With his ominous raincoat and bum leg, which drags noisily on the ground as he walks, Mr. Jingles will remind plenty of ’90s kids of the villain from I Know What You Did Last Summer.

Is there more to our chaste heroine than meets the eye? Probably!

More generally, there’s a whole lot of typical ’80s morality in play as teens who indulge in sexual experimentation are quickly and gorily dispatched for their sins. But such a straightforward premise seems too one-note for American Horror Story — and already there’s room for doubt.

Given how many villains Roberts has played on the show in the past, both the media and fans have noted her switch to playing the virginal good girl in this go-round; but few seem convinced that the good girl act is on the level, and as I watched, I couldn’t help but think of another classic summer camp horror heroine with a mysterious side: Angela from 1983’s Sleepaway Camp.

I’ll refrain from saying much more about the final girl in that notoriously twisty movie, but it seems exactly like the kind of mesmerizingly over-the-top source from which American Horror Story takes inspiration. At a glance, Sleepaway Camp has a lot in common with Friday the 13th, the most evident of 1984’s influences. But Sleepaway Camp is arguably more wickedly funny and inventive. (Let’s face it, the original Friday the 13th is kind of a snoozer.)

Both films are set at summer camp, both feature an unknown serial killer, and both revolve heavily around camp love affairs and the perils of teen sex. In the case of Sleepaway Camp, adolescent sexual awakening is deadly. And though 1984’s Brooke is much older than the typical teen slasher heroine — she’s attending community college — she seems pretty regressed. She’s extremely chaste, abstaining from weed and most alcohol, and freezing in uncertainty when presented with any type of sexual advance.

Of course, this is summer camp, so who knows how long Brooke’s virginal front will last — especially now that she’s being pursued by not one but two serial killers.

The more interesting question, for me and doubtless many American Horror Story fans, is whether Brooke is all she seems. Isn’t it just a little too convenient that she was attacked by Richard Ramirez immediately after hearing her friends discussing him — and then encountered Mr. Jingles right after learning about how he murdered a group of campers years before? We know Mr. Jingles really did break out of the asylum, so we’ll give her that one — but personally, I’m sensing that Brooke may be an unreliable narrator.

And that’s fine with me. I’m always up for a final girl who isn’t quite the victim she first appears to be. Luckily, American Horror Story: 1984 has nine more episodes with which to complicate its dichotomy of villains and virgins. Bring on the time travel!

How HBO’s Succession pulled off its brutal finale
Spain’s socialist party wins election, but it will need help to form a government
The Hate U Give is equal parts coming-of-age drama and Black Lives Matter primer. It’s terrific.
The coronavirus has given Trump something he’s always wanted: A chance to totally take over TV
Watch Lt. Col. Alexander Vindman’s powerful opening statement in the impeachment hearings
Beyond West Side Story: 5 of Leonard Bernstein’s musical masterpieces