American Truck Simulator is the perfect way to hit the great, virtual outdoors 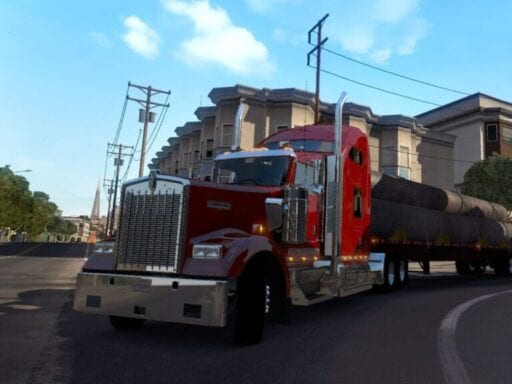 This video game is exactly what it sounds like. But it’s far more engaging than you might think it would be.

There are few American dreams as alluring to me as that of exploring the open road. Taking to the highways in a slick vehicle, driving well into the night, waiting for the next sleepy little town to stretch out before you — they’re all things I love but get to do far less often than I’d like, now that I have a “job” and have to be “responsible” and “pay my bills.”

Thank goodness for the game American Truck Simulator, then. The 2016 release on PC and Mac — which is continuously expanded by developer SCS Software — is exactly what it sounds like: a game where you are a truck driver, completing long hauls and taking cargo from city to city. But what it really excels at is capturing the feeling of driving through the great, open expanses of the country, radio blasting some of your favorite tunes (you can load your favorite songs right into the game). You have places to be, but for now, you’re just killing time.

It’s an extraordinarily relaxing experience, and by the time you’ve completed a run from Los Angeles to Albuquerque, you might have entered a kind of meditative state. That’s not going to sound like a great time to some folks, but for those who play video games primarily to chill out after a long day (as I do), it’s one of the games that will best accomplish that goal.

And, hey, if the quarantine is getting you down, if the thing you’d most like to do is drive to some other city entirely, well, few things are more socially distanced than the cab of a semi, except for the cab of a semi that only exists in a video game. This could scratch that travel bug just a little bit, until the quarantine lifts, and we can all complete long-haul routes in the real world.

As a simulation of actually driving a truck, American Truck Simulator isn’t bad. I’ve driven a semi a handful of times (I grew up on a farm, and my dad owned one), and you rarely get the sense of weight from your virtual truck that a real one would have. But maybe that’s okay since even a massive collision with another car in this game only results in a fine, with the other car driving off unscathed. That would … not happen in real life.

As a simulation of the US, American Truck Simulator is slightly better, though it’s currently working its way across the country from the Pacific coast very, very slowly. The base game allows for hauls through California, Nevada, and Arizona, and further expansion packs have added New Mexico, Oregon, Washington, and Utah, with Idaho coming sometime this year. The simulations of those states capture their essence, with major cities looking more or less like themselves and lots of fun byways to explore (if you’re not on the clock for a delivery).

The spaces are big, but not impossibly so. Taking a job in northern Washington and driving all the way to the southern tip of New Mexico will take you well over an hour of gameplay, but it would take you well over a day of real time, so the scale of the game is vast but not too vast. (What’s even more impressive about the game’s ability to capture the feel of western America is how it’s designed by a Czech company.)

The difficulty also scales. You can get a more realistic simulation of driving by turning it up, or you can turn it all the way down and just bomb around the American West listening to some killer tunes.

It’s also the kind of game that lets you play it however you want. If you really want to just drive around and not worry about hauling goods, you can do that. If you want to take on as many hauling jobs as possible and race the clock, well, you can do that, too. And if you are more business-minded and want to use your proceeds to buy more trucks and hire drivers and start a trucking concern, there are plenty of options to do that as well.

It might sound weird to use the time when you’re not at your actual job starting a virtual job, but the appeal of these sorts of simulators lies in the way they offer us a window into lives that exist outside the normal portraits of pop culture. Truckers are not precisely the center of many entertainment options, and the back-breaking, blue-collar work they do isn’t either. American Truck Simulator won’t make you an expert trucker or anything like that, but it might give you an appreciation for the folks who keep American commerce going, or at least for the siren song of the open road.

Just don’t ask me how to back up a truck that has two trailers attached to it. That always takes me forever.

American Truck Simulator is available to purchase on Steam.

Senate Republicans were laser-focused on confirming judges in 2019 — even the unqualified ones
How “America First” ruined the “American dream”
Facebook took down a Trump post for the first time
The history of Jews, Chinese food, and Christmas, explained by a rabbi
Can a college course in moral philosophy convince people to eat less meat?
The best $500 I ever spent: My autism diagnosis