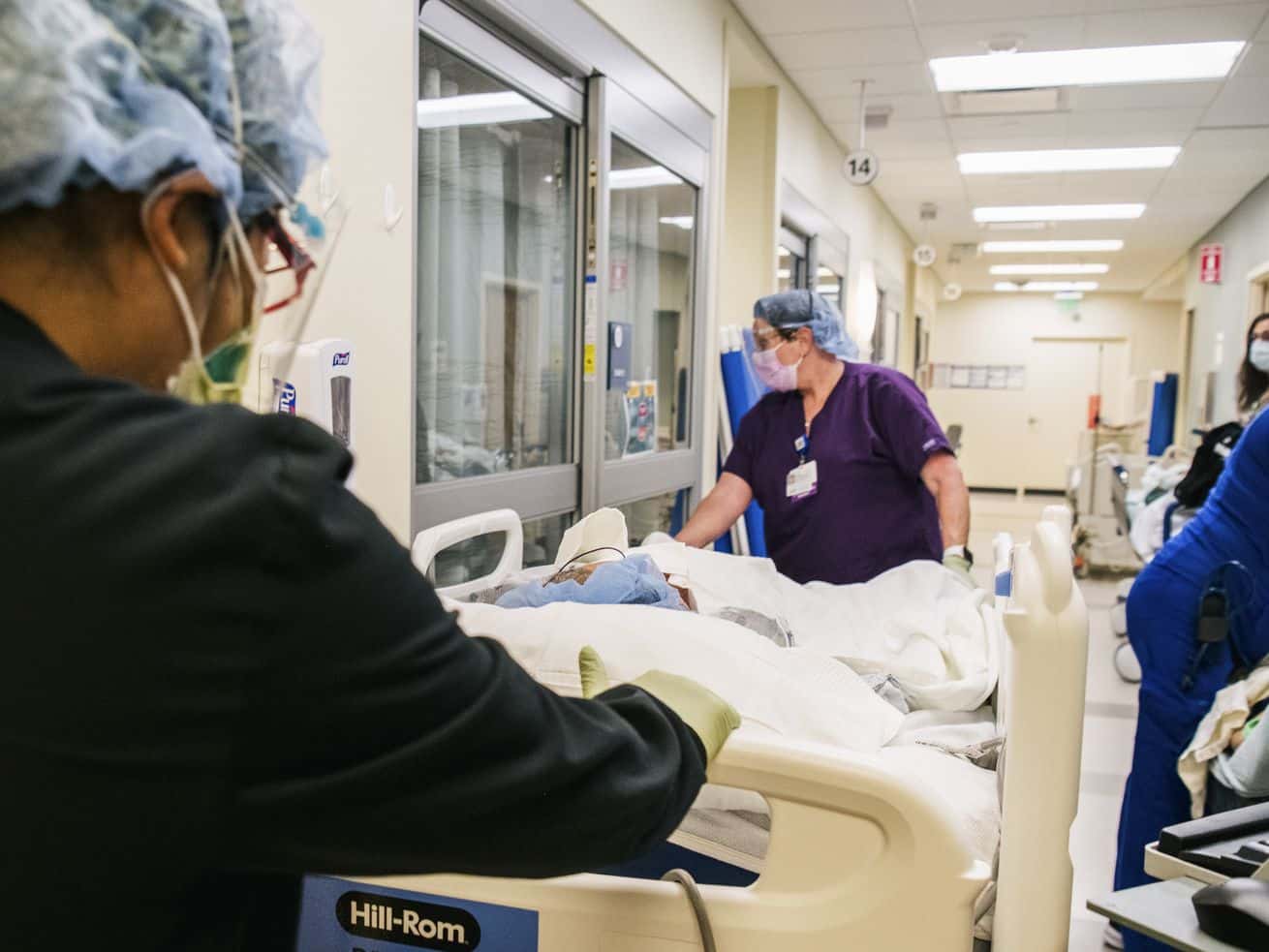 During the current delta-driven Covid-19 wave, Americans are being transported hundreds of miles from their homes because no nearby hospital has room for them. Some of them have even died waiting for medical attention.

In other words, US hospitals are being forced — in the middle of a public health emergency — to ration health care for their patients.

Rationing has long been a dirty word in US health policy, used as an attack on any socialized health program that more centrally determines which medical services will be covered and for whom. The US health system has always rationed care through cost: It’s de facto rationing when a patient doesn’t get the medical care they need because they can’t pay out-of-pocket costs or because they live in a rural community without a facility nearby.

“We’re so used to rationing by ability-to-pay in this country that classic capacity rationing feels a bit foreign,” Hannah Neprash, a health economist at the University of Minnesota, said in an email.

The delta variant, more contagious and virulent than its predecessors, and America’s lagging vaccination rates are driving the current crisis.

The states with the worst outbreaks in confirmed cases per capita right now — Tennessee, Kentucky, Alaska, Wyoming, and West Virginia, according to the New York Times’s tracker — have either set new hospitalization records in the last several weeks or are near their previous highs from the winter wave. All of them have vaccination rates below the national average. Throughout the South, hospitals are reporting they have more patients in need of ICU care than ICU beds available, as the Times reported on Tuesday.

America, the richest country in the world, is not supposed to be a place where patients are left at the door to die. Yet that is exactly what’s happening now — 18 months into the pandemic.

The US health system wasn’t built to withstand a pandemic

Many parts of the American health system have struggled to handle the pandemic. The current hospitalization crisis is just the latest iteration of an institutional failure.

The United States still has a lot of unvaccinated people who are fully vulnerable to the delta variant of the novel coronavirus, which is more transmissible and may cause more virulent disease. One in four people over 18 still haven’t received any dose of a Covid-19 vaccine, and younger age cohorts have lower vaccination rates than their elders. As a result, there has been a shift in who’s being hospitalized: People over 65 made up more than half of hospitalizations in December and January; now they are about a third. Children under 12 still are not eligible for the vaccines, and pediatric hospitals are seeing their highest number of Covid-19 patients ever.

But while the demographics of the people being hospitalized may have shifted, the sheer number of people getting severely ill with Covid-19 and ending up in the hospital is almost as high as it has ever been.

Texas, to give one example, has nearly matched its winter peak with more than 14,200 people currently hospitalized with Covid-19. More than 90 percent of the state’s ICU beds are occupied, according to Covid Act Now. In Idaho, with about 88 percent of ICU beds in use, hospitals had to activate what is known as “crisis” standards of care. That gives them more discretion to prioritize the patients most likely to survive for ICU beds and other treatment.

In Bellville, Texas, 46-year-old military veteran Daniel Wilkinson was rushed to the emergency room. He was diagnosed with gallstone pancreatitis, which is treatable but which his local hospital was not equipped to treat, according to KPRC. The doctor called all over the region — to hospitals in Texas, Oklahoma, and Arkansas, among others — but could not find a hospital that would take him. Those states currently have some of the highest Covid-19 hospitalization rates in the country.

An ICU bed was eventually located at a Houston Veterans Administration hospital, more than an hour away from Bellville. But Wilkinson’s organs started failing on the helicopter ride there and he died. It had been more than seven hours since his mother first brought him to the local ER.

There are more stories like Wilkinson’s across the United States. On Monday, the Washington Post reported that a 73-year-old Alabama man died of a cardiac emergency after being turned away from more than 40 hospitals. The closest hospital that would take him was 200 miles away in Mississippi. Alabama is currently experiencing the second-most Covid-19 hospitalizations per capita in the nation.

Hospitals are trying to balance handling a new Covid-19 surge with providing medical care to all of the other patients who need their attention. But that has required them to make some hard choices.

Karen Joynt Maddox, a practicing physician and health policy researcher at Washington University in St. Louis, said her local hospital was instructed during the pandemic not to take patients from small rural facilities unless absolutely medically necessary, which at times has meant rejecting transfer requests made by family members.

The US does not have a lot of hospital beds compared to many other wealthy countries; about 2.9 per 1,000 people compared to the average of 4.6, according to the Peterson-Kaiser Health System Tracker.

There are some good reasons for that: Over the decades, more medical services have been shifted from inpatient to outpatient settings in order to save costs. But that still ended up shrinking the number of hospital beds available in a once-in-a-lifetime emergency.

We wouldn’t necessarily want the US health system to always be flush with excess hospital capacity, some experts contend. It would cost substantial funding to maintain. But even in normal times, urban hospitals will operate at near 100 percent capacity while rural hospitals sit with half their beds open.

“We have beds, just not in the right places,” Joynt Maddox said, “and with no system to try to use the available beds as rationally as possible.”

The current crisis has revealed how disorganized the US health system truly is. American hospitals don’t have a reliable revenue stream, as hospitals do in countries with budgets that pay providers a predictable amount of money every year.

And there is no central authority to help manage the patient load when US hospitals are overwhelmed; Daniel Wilkinson’s doctor made those calls on his own. As NPR reported, local hospital leaders across the country have been left making desperate pleas to other facilities hundreds of miles away.

That disorganization is what distinguishes the US from other wealthy countries with different health systems — and arguably contributed to some of these terrible outcomes.

America is not alone in being tested by the coronavirus. Other wealthy nations saw their hospitals strained in the pandemic, especially early on, when countries like Italy endured some of the worst initial coronavirus outbreaks.

But a year and a half into the pandemic, those other countries appear better equipped to handle the load, aided by both higher vaccination rates and more cohesive health systems.

The US is mediocre in terms of hospital capacity, but it’s not at the bottom among its economic peers. Both Canada and the United Kingdom, with government-run health programs for every citizen, actually have slightly fewer hospital beds per capita.

And they neared their limits during the worst waves of the pandemic. The UK’s National Health Service was forced to transfer ICU patients to less congested areas during the fall and winter surges. In Ontario, more than 2,500 patients have been moved to other cities in order to receive lifesaving care. Even in France, which has significantly more hospital beds per capita than the US, more than 100 Covid-19 patients had to be evacuated as Paris hospitals ran low on beds.

These are not quite the same horror stories as we are seeing in the US, however, because there was a stronger level of coordination among the hospitals. In all of these international cases, either the national or local government managed the movement of patients.

No such system exists in the US; it is largely done informally. I spoke with a California hospital executive last summer who had to call a nearby hospital himself, looking for a ventilator when his facility was running low on those lifesaving machines.

Other countries appear to have avoided unnecessary deaths because they have a real system to coordinate care. In Britain, hospitals are currently able to handle more emergency care than the average volume prior to the pandemic, according to recent research by the Nuffield Trust, though elective surgeries are still sometimes being canceled.

“Hospitals have been incredibly stretched but have always been able to offer urgent and emergency care,” Nick Scriven, a UK doctor and past president of the Society of Acute Medicine, told me. “People were not turned away if they needed a hospital bed.”

The pandemic laid bare how disastrously disorganized the US health system is. But that’s always been true. It just usually reveals itself in more subtle ways.

An overwhelmed ER in a downtown urban setting might lead to some patients leaving without being seen. Low staffing at certain times — US hospitals stand out from their international peers because they have more administrative staff and less medical staff — appears to lead to worse outcomes. And then you have the higher out-of-pocket costs borne by Americans, which have been shown to lead to people skipping or postponing necessary medical care.

As Ezra Klein wrote for Vox last year, in covering the UK’s National Health Service, every health system rations care. There are not unlimited resources. But while in the US that rationing occurs in subtle and haphazard ways, other countries have tried to build a more rational system for managing their medical capacity.

That left them better positioned to handle surges of sick patients during the pandemic. America is paying the price for its failure to do the same thing.