Americans have a longstanding love of magical thinking 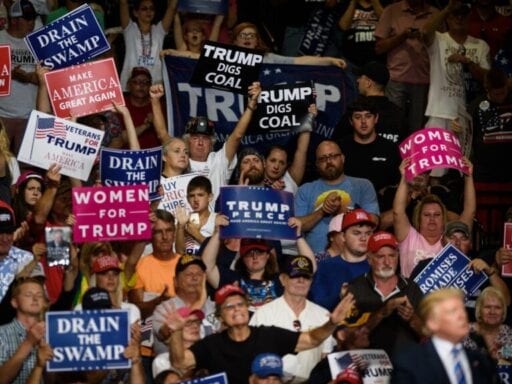 Kurt Andersen on how we got Trump.

“The country got its start with people believing that they could create their own world, their own truth.”

That’s what Kurt Andersen, author of Fantasyland: How America Went Haywire, told me during our conversation about America’s descent into what he calls “anything-goes relativism” — a willingness to buy into delusion and falsehood that was bound to culminate in the election of a man like Donald Trump.

His book argues that Americans have always been devoted to the fantastical — from early settlers searching for gold to conspiracy theories about the Freemasons to hustlers like P.T. Barnum and Buffalo Bill.

The 1960s, for Andersen, were a particularly pivotal moment because people began to experiment with different ways of understanding the world, which was initially liberating. But “we became too skeptical, too loose with the truth,” he argues, and “that came back to bite us in the ass.”

The question is, why? What is it about the American experience, the American character, that cultivated this love of magical thinking? Why are so many of us committed to our own tailored versions of reality? Andersen’s book tries to answer these questions.

Our conversation, edited for length and clarify, follows.

Let’s focus on the reality-fiction distinction at the core of the book. What’s the “fantasy-industrial complex”?

I coined the term to try to capture something important that has evolved in this country. In the ‘60s, almost everything in America becomes entertainment. Everything in America is like show business. That’s the genesis of the idea that I saw happening as early as the 1800s when I started looking at it. In the 1830s, for example, we had newspapers publishing hoaxes as though they were news and religious evangelists going around the country advertising themselves in newspapers and performing as though it was a night at the theater. This accelerated in the 19th and especially the 20th century with Hollywood and television.

America has collapsed the space between entertainment and news, reality and unreality, serious and unserious. This weird cocktail is part of American life, part of our culture and value system.

So when you’re referring to the fantasy-industrial complex, you’re not just talking about Hollywood and TV?

No, it’s much more than that. It’s not just Hollywood. I actually point to something like the 2008 financial collapse as an example. The financial industry became part of the fantasy-industrial complex because they were selling a fantasy of real estate, a belief that people with lousy credit should be given giant loans, that the value would just keep going up, that the bubble wasn’t real, that the whole house of cards would just keep going forever. That was pure fantasy, propped up by a country conditioned to believe anything.

There are countless other examples. Part of the template I’m trying to provide here is a way for people to see how we might think of movies, the gaming industry, religion, finance, hospitality, real estate, and so many other things as part of the fantasy world we’ve created and live in.

Do you think Americans have simply lost the ability to discern fact from fiction? I actually think the problem is that most just don’t give a damn.

That’s the question. Have we lost the ability to distinguish reality from fiction or do we not give a damn? I’m actually not sure we can separate those two things. As you know, I’ve become fascinated by professional wrestling as a part of this and as more than just a metaphor for this.

At the end of the last century, the people in the wrestling business realized that they didn’t have to pretend that this was real anymore. The whole thing was built on this assumption that you had to pretend it was real. But they realized that people don’t care if it’s real or fake; they just want to be entertained.

I think that’s the attitude people have about damn near everything now — politics, theatre, professional wrestling, sports, you name it.

I’m obliged at this point to note that Donald Trump is a member of the WWE “Hall of Fame.”

So Trump is the culmination of America’s descent into Fantasyland?

I’d say so. I’ve been familiar with Trump for a long time, and I was one of the first people to write about him back in the ‘80s. I started paying attention to him before a lot of other people did. There’s nothing there. He’s a showman, a performance artist. But he’s a hustler like P.T. Barnum.

As I was writing this book in 2014 and 2015, I saw that Trump was running for president and I realized, about halfway through the book, that I had to reckon with this stupid — but deadly serious — candidacy.

Watching it was strange, though. I was finishing the book and getting to the part about modern politics, and here’s Trump about to win the nomination. It was as though I had summoned some golem into existence by writing this history, of which he, as you say, is the apotheosis.

“America has collapsed the space between entertainment and news, reality and unreality, serious and unserious”

Well, I guess the good news is that he’s the ultimate vindication of your thesis.

I mean, I guess he proves my point just as I was finishing the book. So that’s gratifying. But still, there’s the reality that this has happened. Somebody said to me the other day, “It’s like Einstein. Right after he puts out the final, finished theory of relativity in 1915 or 1916 or whatever, three years later there’s this eclipse that proves it.” I said, “Thank you for comparing me to Einstein, and I guess thank you for comparing an eclipse to Donald Trump,” but that’s what it was. He came along and now this conversation is much easier to have because we’ve got this guy as president, who is the perfect expression of our disconnectedness from reality.

Where do we go from here? All the forces that led us to this place are still here and they’re not going away.

I wish I knew. I was very pleased that my editor and publisher didn’t push me to have some rousing, upbeat final chapter, where I explain how we get out of this and make everything okay again. I don’t feel that. I’m not saying we’re dead and we’re done, but we might be, which as an optimist, I have never been inclined to think.

All I can say at the end of the book is that we should have conversations like this, and consider ourselves members of the reality-based community. We have to recognize that this is not just about Donald Trump or policy disagreements with Republicans or Democrats. It’s about what we can do in our individual lives, or in the larger public sphere, to agree to agree that we need to stick to the facts. And we have to tell people who are full of shit that they’re full of shit. And we have to support the Voxes and the ProPublicas and the New York Times and the Washington Posts and the public radios of the world.

I’m hopeful that the next generation will course correct and change things, but I don’t know. As you said earlier, the structure of incentives that exists to put nonsense on cable television and the internet isn’t going away. I don’t see how the genies get put back in the bottle.

House Democrats vote to repeal 9/11-era law used to authorize perpetual war
How should billionaires spend their money to fight climate change? I asked 9 experts.
Playgrounds, babysitters, grandparents: What’s safe for kids in the age of coronavirus?
Bloomberg plans to make a secret pitch to Silicon Valley billionaires, showing he’s not afraid to sc...
The race to make coronavirus testing as easy as a pregnancy test
Boris Johnson just resigned over Brexit talks. Prime Minister Theresa May could be in trouble.