Americans want a woman to take down Trump. Just not in the election. 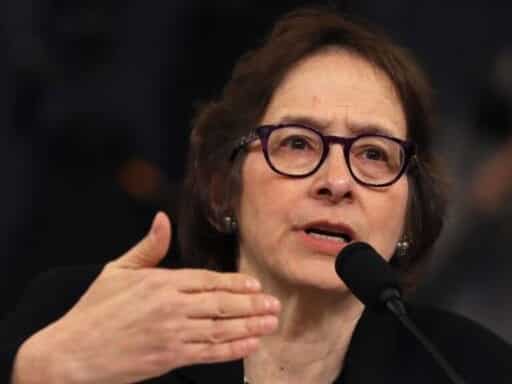 “Which of these campaign posters would be better,” asked Bob Franken at the Orange County Tribune: “‘Fiona Hill for President’ or simply ‘Fiona!’?”

“She was brave,” wrote Molly Jong-Fast at the Daily Beast, “but also deliciously brash in a way that women must be if they are to survive Trumpism.”

Hill hasn’t been the only woman to receive praise for her testimony in the hearings. Former Ukraine ambassador Marie Yovanovitch also won accolades for her “uncynical outrage,” and the Washington Post’s Ruth Marcus wrote that her “femininity is her superpower.” And while Stanford law professor Pamela Karlan raised ire on the right with a joke about the name of President Trump’s youngest son, she also got glowing reviews from commentators across the political spectrum.

The women’s performances inspired journalism professor and MSNBC contributor Jason Johnson to make an observation: “Literally every woman that has testified during #ImpeachingHearings has delivered the strongest points and messages but somehow this country can’t figure out how to put a woman in the White House.”

The disconnect he points to is real: If the impeachment hearings are any guide, Americans are excited about the prospect of a woman taking down President Trump. But when it comes to actually beating him at the ballot box, they’re not so sure — female candidates are dogged by concerns about “electability,” and Sen. Kamala Harris, once considered a potential frontrunner, dropped out of the race this week.

Of course, many of the commentators praising Hill, Yovanovitch, and Karlan are likely the same ones pushing back against “electability” concerns and calling for female candidates to be taken more seriously. But the love for the female witnesses went beyond the media — on Twitter and Reddit, ordinary people were calling for Fiona Hill to run for president (something she can’t legally do, since she was born in England). The reactions expose something people who study gender dynamics have long noticed about American society: powerful women can be very popular — when they’re not trying to attain more power.

Women played a standout role in the impeachment hearings

While the impeachment hearings before the House Intelligence and Judiciary Committees in recent weeks have included explosive testimony by men, many of the standout witnesses have been women.

In November, Yovanovitch testified that she had been forced out of her ambassadorship after a smear campaign by Trump’s personal lawyer Rudy Giuliani — and earned a standing ovation for her words. Soon thereafter, Hill spoke of how she’d found opportunity in America that would have been denied to her in Britain due to her working-class background, and said that the Trump administration had been conducting a shadow foreign policy to advance the president’s political interests at home.

Then, earlier this week, Karlan explained before the Judiciary Committee why Trump’s behavior is impeachable, offering the analogy of a president denying disaster aid to a US state unless its governor helped investigate his opponent.

KARLAN: “Imagine living in a part of Texas that’s prone to devastating flooding. What would you think if your governor asked for a meeting w/POTUS to discuss getting disaster aid that Congress has provided for [and POTUS] said, ‘I would like you to do us a favor?'” pic.twitter.com/JGcXFQHUBO

None of the three were household names before the impeachment inquiry began, but all drew praise from pundits and ordinary Americans alike. At the New Yorker, Susan B. Glasser wrote that “Yovanovitch did something that I thought had become impossible in Donald Trump’s Washington: she managed to hold on to her amazement and outrage at the President’s amazing and outrageous actions.”

“In this hyper-partisan, hyper-political time,” Glasser went on, “she was neither.”

Hill, meanwhile, “spoke with the authority of a Harvard PhD who has exactly no time for nonsense and no patience for fools,” Monica Hesse wrote at the Washington Post, noting that online commenters had suggested the former Russia adviser play Q from the James Bond franchise, or perhaps Bond himself.

When Karlan spoke this week, Vivian Kane at the website the Mary Sue wrote that she was “the paragon of expertise. And she was not messing around today.”

Karlan later drew criticism from conservatives for joking that “while the president can name his son Barron, he cannot make him a baron.”

But that episode aside, the testimony by the women drew praise from some conservatives as well as progressives, with Republican strategist Ana Navarro-Cárdenas tweeting that the women “make me feel like standing up in my living room, and shouting, ‘Yes, girl. Yes!’”

Apropos of nothing in particular…the women -Amb. Yavanovich, Fiona Hill and now, Prof. Pamela Karlan- who have testified in front of these Impeachment Hearings are amazing and no-nonsense. They make me feel like standing up in my living room, amd shouting, “Yes, girl. Yes!”

The women were indeed highly prepared and articulate in their testimony, which at times stood in stark contrast to questions from Republicans, as when Rep. Doug Collins joked that Karlan’s testimony would show “why most people don’t go to law school.”

“I read transcripts of every one of the witnesses who appeared in the live hearing because I would not speak about these things without reviewing the facts,” she responded. “So I’m insulted by the suggestion that as a law professor I don’t care about those facts.”

But beyond the witnesses’ qualifications and performances, there may be something cathartic about watching a woman deliver testimony that’s damaging for Trump. After all, the president was elected just shortly after he was heard on tape bragging about his ability to grab women “by the pussy.” He has been accused of sexual misconduct by more than 20 women.

For women, as well as for significant numbers of Democratic and independent men, his presidency has helped trigger a reckoning around men’s disproportionate power in government, as evidenced in recent polling. And so for the more than 50 percent of Americans who disapprove of his performance, there may be a particular satisfaction in the idea that a woman could be the one to bring him down.

But so far, that sentiment hasn’t always translated into support for female candidates in 2020. Sen. Elizabeth Warren remains a frontrunner in the race, but her standing in the polls has dropped following criticism of her health care position. Meanwhile, her campaign has been plagued by questions about her “electability” and her personality — in a recent New York Times/Siena College poll, 41 percent of voters who support Vice President Joe Biden in 2020 but not Warren agreed with the statement that women who run for president “just aren’t that likable.”

“There’s just something about her that I just don’t like,” a woman who previously supported Trump told the Times of Warren.

Meanwhile, Harris ended her presidential campaign this week despite high initial hopes. Her campaign struggled on multiple fronts, but it’s still notable that, as many have pointed out, a senator and former attorney general of California has left the race while Pete Buttigieg, the mayor of South Bend, Indiana, who won his election by fewer than 11,000 votes, is considered a frontrunner.

The female candidates for president differ from Yovanovitch, Hill, and Karlan, in many ways — notably, the witnesses testifying at the hearing were there in a nonpartisan capacity. Hill, in particular, emphasized her years of service under both Republican and Democratic presidents.

Still, when it comes to public opinion, the female witnesses have something big going for them: They’re not running for office.

It’s a phenomenon that researchers and feminist writers have noticed for years. As Sady Doyle put it at Quartz in February 2016, America loves powerful women — “as long as they’re not asking for a promotion.” Clinton was highly popular as secretary of state, Doyle notes, with an approval rating of 69 percent when she stepped down from that job in 2013. Only when she ran for president did her numbers start to nosedive, reaching 40.8 percent at the time of Doyle’s writing. Pundits, meanwhile, complained that “there is something unrelaxed about the way she is communicating” or that “Hillary’s personality repels me.”

Meanwhile, other women who were not running for president were seen as more likable — like Warren, for example, who was the subject of a failed “Draft Warren” effort in 2015.

Doyle also cites a 2010 study that found that voters are less likely to vote for female politicians when they see them as “power-seeking,” while men face no such penalty.

“Because power and power-seeking are central to the way masculinity is socially constructed and communality is central to the construction of femininity, intentionally seeking power is broadly seen as anti-communal and inconsistent with the societal rules for women’s behavior,” the study found, according to Harvard’s Gender Action Portal. Because of this, “women’s power-seeking will evoke emotional reactions of contempt and disgust and therefore voters will be less likely to support their candidacy.”

Again, many of the commentators cheering on Hill, Yovanovitch, and Karlan are those who have called for an end to questions about “likability” and “electability” when it comes to female candidates — or at least a new layer of nuance applied to those questions.

The Washington Post’s Hesse, for example, wrote in October that “this might be the first election where, when we talk about electability, we are also talking about the electability of men. Do they have the right kind of masculinity for the moment? Does it seem like they’re addressing the female candidates with respect? What kind of dude are they being?”

Still, it was hard to read the many “Fiona Hill for president” tweets following her testimony — many written not by political analysts but by seemingly ordinary voters — and not wonder what would happen if the laws were changed and the Brit could actually run for the highest office in our country. An educated guess: Americans would quickly find something not to like about her.

Twitter is finally fighting back against deepfakes and other deceptive media
22 million jobless claims, masks mandated in New York: Thursday’s coronavirus news
Can Joe Biden win the nomination even if he loses Iowa and New Hampshire?
An extraordinary Twitter breach compromises everyone from Elon Musk to Kanye West
Super Tuesday: Live results
Welcome to the Romance Issue of Vox’s The Highlight