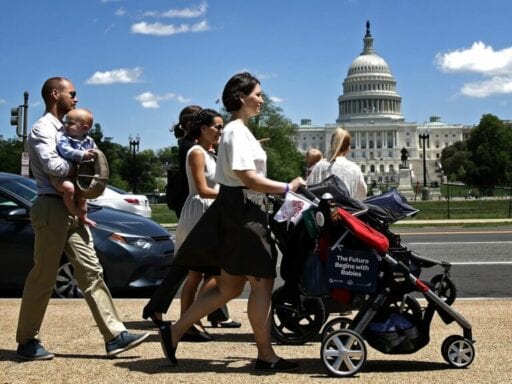 Republicans messed up their chance to score an easy political victory.

The Senate went on summer break this week, after a lame attempt to give working parents some relief.

Sen. Marco Rubio (R-FL) introduced the Economic Security Act for New Parents last week, with support from White House adviser Ivanka Trump. The full text of the bill hasn’t been released, but it’s been sold as providing parents with “paid parental leave” after the birth or adoption of a child.

The bill is not, in fact, paid leave. It’s another version of unpaid leave that working parents in the United States would have to pay for themselves. A summary of the bill shows that it would merely let workers access some of their Social Security retirement income in advance to make up for some of the wages they would lose when taking parental leave. Workers would still bear the cost of taking time off — by delaying their own retirement.

The United States is the only industrialized country that doesn’t guarantee paid parental leave to working parents, and Republicans and Democrats overwhelmingly support the creation of such a program. The problem is that no one seems to agree on how to pay for it, and Rubio’s bill is the weakest proposal yet because Social Security, as it stands, is in trouble.

Americans want paid parental leave, and the US economy needs it

The idea of a government-run program to provide maternity and paternity leave to new parents is not controversial. About 74 percent of registered US voters in 2016 said they wanted the government to do so. When you break down the numbers, the support is overwhelming across genders, political parties, and even income groups. In other words, it’s a safe political issue for Republicans to tackle, if only they weren’t so afraid to make businesses pay part of the cost.

Nearly every industrialized country in the world provides working mothers with at least three months of paid maternity leave — the minimum recommended by the United Nations’ International Labour Organization. In most of those countries, employers and employees pay a tax to fund the benefit. Canada has this type of system, which allows parents to take a year of leave while receiving 55 percent of their salary (up to 80 percent of wages are covered for low-income workers).

Some US businesses voluntarily offer paid parental leave to their workers, but only about one in 10 workers in the country get such a benefit from their employer. Low-wage workers are the least likely to get it.

In response to federal inaction on the issue, several states have started requiring employers to provide some paid leave: California, New York, and the District of Columbia are among those that do.

Research shows that paid leave programs improve child health, promote gender equality, and help keep women in the workforce. Studies have shown that California’s paid-leave law, which went into effect in 2004, led to an increase in work hours and income for mothers with young children. Studies have also shown that paid leave is linked to lower poverty rates in 18 countries.

The need for paid leave in the United States is more urgent than ever, as nearly half of two-parent US households with children have parents who both work full-time jobs. Economists believe the lack of paid leave is one reason American women are dropping out of the labor force, and that’s bad news for the US economy. About 75 percent of working-age women are part of the US workforce, reflecting a slow decline since 2000, when 77 percent held jobs. Economists have various theories for the decline, including the shrinking job market for low-skilled workers and the growing cost of child care.

When women joined the public labor force en masse in the 1970s, their earnings were a huge boost to the US economy, according to the White House Council of Economic Advisers under President Obama. They attributed nearly all of the middle-class income growth since 1970 to the rise of women entering the US workforce. But female participation in the job market began to flatten out in the 1990s and is now declining, even though it continues to increase in other developed countries.

Nearly a third of the decline of American women in the labor force, in comparison to other developed countries, can be explained by the lack of family-friendly workplace policies in the United States, including paid leave for new parents, according to research by economists Francine Blau and Lawrence Kahn at Cornell University.

Coming up with an effective paid parental leave system in the United States isn’t hard. The hard part is getting Republicans to agree that businesses should pay for some of it. Which is how we got to Rubio’s shortsighted plan.

There are few details about Rubio’s paid leave plan. But here is what we know about it: New parents would dip into their Social Security retirement benefits to cover part of the cost of taking time off from work. Through the plan, up to 70 percent of their wages would be covered for two months of leave. However, that would mean delaying their retirement payments through Social Security at least three to six months per child. The benefit is not available for other types of paid leave, such as workers who need to take time off to care for a sick relative.

So Rubio’s “paid leave” program is essentially unpaid, at least by employers, since workers are the ones paying for their own time off. Employers pay nothing, and neither does the federal government. Even worse, the plan doesn’t take into account the fact that the future of Social Security is in jeopardy. The system is running a deficit for the first time in more than 30 years, and the Social Security Administration expects that it will run out of money to pay workers their full retirement benefits by 2035. Allowing workers to take more money from the system will only make the problem worse.

There are better options out there. A group of influential conservative and liberal economists proposed one not-so-ideal option last year: pay for parental leave by increasing payroll taxes on workers, and through other savings in the federal budget. The downside is that the plan still lets businesses off the hook from shouldering any of the cost.

Sharing the cost between employees and businesses seem obvious. That’s how most workers’ insurance programs operate, and that’s how most paid parental leave programs across the world work. Businesses should share the burden of paying for the program because they benefit from paid leave too. Female employees are more likely to return to their jobs after giving birth, keeping more workers in the labor force for employers to hire when the economy is growing (like it is now).

An even broader option is some version of the FAMILY Act, which Sen. Kirsten Gillibrand (D-NY) introduced in 2017. The bill offers workers up to 12 weeks off with up to 66 percent of their wages covered for family and medical leave. The benefit would be paid for with a tax levied on workers and employers (about 2 cents each for every $10 paid in wages). And the plan is flexible so that it benefits all employees, not just parents. That’s because it would be available to any worker who needs to take time off to care for a relative, or for a medical procedure.

The bill has more than 30 Democratic co-sponsors, but no Republican lawmakers will touch it.