America’s abortion debate is being defined by Fox News 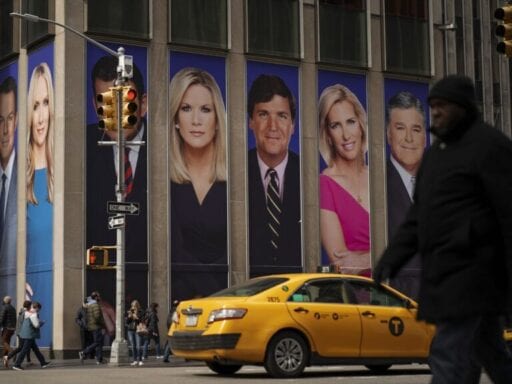 A new study shows how the network dominates coverage of abortion — and sets the agenda other networks follow.

Something strange happened to the abortion debate earlier this year.

Politicians, media outlets, and ordinary people began talking about “post-birth” or “fourth-trimester” abortion, claiming that doctors in America are killing babies after they’re born. This would be murder, not abortion, and it’s already illegal in every state. No abortion-rights group supports this.

But the idea that “post-birth” abortion is happening, and that abortion-rights supporters want it to be legal, made its way into speeches by President Donald Trump and to the floor of Congress, where Republicans have tried more than 70 times to get a vote on a bill that would protect abortion “survivors.”

How did something that’s already illegal, and that isn’t abortion, become the subject of abortion legislation in Congress? The answer has to do with who’s driving the abortion debate in America right now: Fox News.

When it comes to coverage of abortion, Fox News dominates the cable news landscape. The progressive media watchdog group Media Matters for America recently looked at coverage of common abortion-related topics on the big three cable networks: Fox, CNN, and MSNBC. It found that a full 94 percent of statements on those topics came from Fox.

The study, provided exclusively to Vox ahead of publication, suggests Fox dominates the abortion debate when it comes to content. When the authors looked at specific statements on abortion, they found commentators on MSNBC and CNN echoing statements made on Fox — from the false claim that Planned Parenthood has been proven to sell fetal body parts to the idea that recent laws allow abortion almost “up until the time you cut the umbilical cord.” Overall, the study authors judged Fox News statements on abortion to be inaccurate 85 percent of the time — but they found that 67 percent of statements at CNN and 40 percent at MSNBC were inaccurate as well.

Overall, study author Sharon Kann told Vox that when other networks do talk about abortion, they’re often just responding to what Fox News has already said or commenting on political controversies that Fox helped create. The result is American viewers don’t hear about abortion as an issue of health or human rights but only as a topic of political debate. And because Fox is often first to the story, the network and its conservative-leaning hosts often get to define what that debate looks like.

On abortion, “Fox News is the loudest voice in the room,” Kann said. “When other networks do engage, the terms are already set.”

For their study, released on Monday, Media Matters researchers looked at coverage of abortion between March 2, 2018, and February 28, 2019. Specifically, they looked at four topics that have been in the news in recent years: videos from the anti-abortion group Center for Medical Progress purporting to show that Planned Parenthood sells fetal tissue; abortion funding rules like the Hyde Amendment, which bars federal funding for most abortions; Planned Parenthood’s role providing reproductive health services; and discussions or allegations of “extreme” abortion procedures, like “abortions until the moment of birth.”

The authors found that Fox News had the vast majority of statements on these topics as well as the majority of more in-depth discussions of abortion. During the study period, Fox aired 334 segments with substantive discussion of one of the abortion topics, while MSNBC had 115 and CNN had just 77. As Kann and her co-author Julie Tulbert put it in a report on their research, “CNN and MSNBC are allowing Fox News to drive abortion-related conversations.”

That effect shows up in what the networks are saying, not just how much they’re saying it. For example, the study authors found that Fox News commentators and guests made numerous statements about the claim that Planned Parenthood sells fetal tissue (multiple investigations have found no evidence of this). But a similar statement also cropped up on CNN, with Marc Short, now chief of staff for Vice President Mike Pence, telling the audience about “certain parts of the pro-abortion industry that was marketing fetus body parts.”

According to the researchers, that was actually the only statement CNN aired during the study period regarding the claim about Planned Parenthood and fetal tissue, meaning regular viewers of the network weren’t given accurate information to counter Short’s comment.

Other networks are essentially letting Fox define the conversation on abortion

Media Matters has conducted similar research in the past, Kann said, and consistently found that the majority of cable news coverage on abortion is on Fox News. The group has also found, over the years, that CNN and MSNBC often repeat misinformation rather than debunking it, she said.

This year, however, a new theme emerged. It started with efforts to loosen abortion restrictions in New York and Virginia. New York’s Reproductive Health Act, passed in January, allows abortions after 24 weeks if a fetus is not viable or there is a risk to the pregnant person’s health (previously, most abortions after that point were banned in the state). In Virginia, meanwhile, a bill proposed this year would have broadened the circumstances under which a pregnant person could get a third-trimester abortion.

These legislative efforts didn’t initially get a lot of coverage on CNN or MSNBC, but Fox began covering them aggressively. The day after New York Gov. Andrew Cuomo signed his state’s law, host Laura Ingraham said that it allowed abortion “up to birth” (the New York law allows abortions after 24 weeks only under select circumstances, such as a fetus that cannot survive outside the womb). Sean Hannity, meanwhile, said the following day that “the State of New York legalized late-term abortions, up to the ninth month. That will be called infanticide.”

The narrative that the New York law allowed abortion until birth was already in place when, on January 29, the Virginia House of Delegates held a hearing on its bill. Del. Todd Gilbert, a Republican, asked questions reminiscent of this narrative, pressing the bill’s sponsor, Democratic Del. Kathy Tran, about whether the law would allow a patient to get an abortion if she was “about to give birth” or was “dilating.”

Tran seemed unprepared for the question and said that her bill would allow that. She later said that she misspoke: “I should have said, ‘Clearly, no, because infanticide is not allowed in Virginia, and what would have happened in that moment would be a live birth.’”

But Virginia Gov. Ralph Northam, a Democrat, muddied the waters further a few days later when he was asked to respond to Tran’s answer.

Many commentators, especially conservatives, interpreted his comments to mean that he supported infanticide. The governor’s office later clarified to Vox that he was “absolutely not” referring to killing an infant, but was talking about “the tragic and extremely rare case in which a woman with a nonviable pregnancy or severe fetal abnormalities went into labor.”

But President Trump and others began claiming that Northam and other Democrats thought it should be legal to kill babies after they were born. “We had the case of the governor of Virginia where he basically stated he would execute a baby after birth,” Trump said in his State of the Union address in February.

Meanwhile, Fox News commentators picked up the governor’s comments and used them to argue that both the New York and Virginia measures would allow killing babies after birth. For example, Jon Gabriel, editor-in-chief of the website Ricochet, said on Fox in February that, “what we’ve seen with Ralph Northam’s comments and also the legislation that passed in New York, you have some Democrats who seem to be pushing third trimester abortion but fourth trimester.”

At first, Kann said, CNN and MSNBC didn’t talk much about the New York or Virginia laws. They did not, for example, give extensive coverage to activist efforts to pass the laws or to how they would affect patients. When they did begin to cover them, “it was after it became a political story” — thanks, in part to coverage on Fox News.

Three days after the hearing on the Virginia bill, CNN focused on conservative response to Northam’s comments as part of a segment on broader controversy about the governor, with correspondent Sara Sidner saying “a lot of people took that, would say, OK, the baby is still alive and you’re talking about killing a child that has already been born.” Sidner added that “he’s already faced quite a bit of criticism there.”

The fact that Fox spends so much more time on abortion than other networks has a real effect on the larger media narrative about the procedure, Kann said. When Fox hosts make misleading claims about abortion and those show up in the State of the Union address, she explained, and “CNN and MSNBC haven’t been talking about the substance of this, when they come to the narrative a month later, it really changes the terms of the conversation.”

In particular, when other networks arrive at the story late, it becomes harder for them to correct false claims. “If you’re contending with already repeated and ossified misinformation in the mind of viewers, it’s so much more difficult to get the accurate information out there,” Kann said.

Not everyone agrees that Fox, or conservative sources more generally, dominate abortion coverage. For example, Charles Camosy, a board member of Democrats for Life of America, wrote in a New York Times op-ed earlier this year that media outlets were mischaracterizing the views of advocates like him by using the term “anti-abortion” rather than “pro-life.”

“This language allows critics to dismiss me and fellow pro-lifers as single-issue obsessives, which we are not,” he wrote.

Other anti-abortion advocates say media coverage of the issue is missing crucial stories. Serrin Foster, president of the group Feminists for Life, which opposes abortion, told Vox in an email that “since abortion is such an important issue to people on both sides of the political divide, it is surprising how little air time is devoted to this contentious subject from mainstream cable news.” She called for more coverage of legislation that supports pregnant people, such as a law recently passed in California that grants protections to pregnant and parenting students.

She’s not the only one who sees media coverage of abortion and related issues as lacking. Researchers say the Media Matters finding is in line with the broader landscape of abortion coverage, across the political spectrum.

“Most of the time when abortion is covered, it’s as a political hot-button issue, not treated as a health issue,” Katie Woodruff, a public health social scientist at Advancing New Standards in Reproductive Health, a group at the University of California, San Francisco, told Vox. “It’s very much treated in the context of horse-race politics.”

“The way even mainstream news covers abortion tends to emphasize the polarization that we have come to associate with it,” added Woodruff, who has studied newspaper coverage of abortion. “Most of the public supports abortion rights and abortion is a very safe and common experience, and I don’t think you would understand that from even mainstream news coverage of the issue, let alone how Fox chooses to approach the topic.”

Kann also says that to combat misinformation, media outlets need to be specific in their coverage of abortion and look beyond the political battles.

“When we treat abortion just as a political issue” and not one of health care or people’s rights, she said, “we lose the context necessary to debunk some of the most harmful claims that are coming out of right-wing media.”

“Making sure that we are talking about abortion in specific, nuanced, and factual ways is always going to be the most important,” she added.