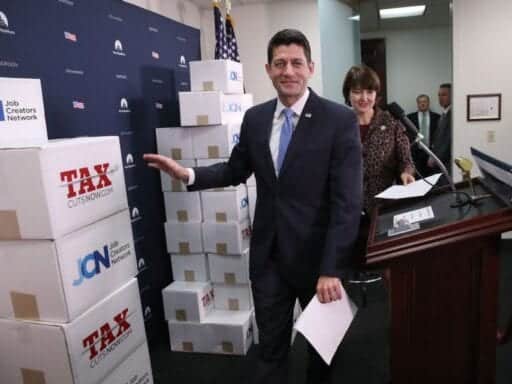 And according to the San Francisco Fed, the latest tax cuts probably won’t grow the economy much, if at all.

Tax cuts have clipped trillions of dollars off federal government revenues in recent years, largely to the benefit of the richest Americans. Two-thirds of the cuts have gone to the top 20 percent of earners. And while the latest round of tax cuts is supposed to boost the economy, that’s not guaranteed to happen. Those are the conclusions of two new reports out this week.

The first analysis, from the Institute on Taxation and Economic and Policy, a liberal-leaning think tank, found that from 2001 through 2018, changes to the federal tax code have reduced revenue by $5.1 trillion. Sixty-five percent of the savings have gone to the richest fifth of Americans, with 22 percent of them going to the top 1 percent alone.

According to the institute’s estimates, by 2025 the tax cuts will grow to $10.6 trillion. Of that amount, almost $2 trillion will be received by the richest 1 percent of Americans.

“If you look at the richest 1 percent, they’re getting more than the bottom 60 percent of Americans,” Steve Wamhoff, director of federal tax policy at the institute and one of the report’s authors, told me.

The Institute on Taxation and Economic and Policy analysts compared what households pay each year with what they would have paid under the tax scheme in 2000. This included the Bush tax cuts in 2001 and 2003; extensions and provisions, such as a payroll tax holiday, enacted under the Obama administration; and the Republican tax cuts signed by President Donald Trump in December. The analysis also folded in tax increases, such as the 3.8 percent tax placed on certain investment income as part of the Affordable Care Act.

The wealthy are also seeing the biggest reductions in the share of their income going to taxes. In 2012, when most of the Bush tax cuts were still in effect and Obama had enacted some tax policies aimed at helping low- and middle-income Americans, the richest 20 percent of earners received tax cuts equal to 4.6 percent of their income, compared with the 3.6 percent obtained by the bottom 20 percent.

In 2015 that situation flattened out a bit as smaller tax breaks were in place for all income groups. But following the passage of the 2017 tax bill, the proportional difference according to income is back again: The top fifth of Americans are drawing tax cuts that amount to 4.8 percent of their incomes, while the bottom 60 percent are receiving cuts of less than 4 percent.

It’s not a surprise that the tax cuts are tilted to favor the wealthy; that’s largely how the Bush tax cuts and the 2017 GOP tax bill were designed. The argument made by proponents of such legislation is that rich Americans and corporations (the other big winner under this scenarios), will inject more money into the economy to grow it with their tax savings.

But researchers at the Federal Reserve Bank of San Francisco this week warned that might not be the case, especially right now.

Economists Tim Mahedy and Dan Wilson said in a letter released on Monday that the $1.5 trillion tax cuts passed by the Republican-dominated Congress in 2017 will likely boost the economy less than some predicted, and the trims might not do anything at all.

The explanation: The cuts came at a time when the US economy was already strong and in its eighth year of expansion. Mahedy and Wilson cite a collection of recent research that shows that if a fiscal stimulus takes place when the economy is firing on all cylinders, it tends to not do much.

“The [2017 tax bill] is in essence a large, mostly temporary tax cut hitting a hot economy,” Mahedy and Wilson wrote.

“For the people who look at our estimates on the distribution of these tax cuts and say, ‘Well, none of this matters, it’s going to grow the economy,’ the Fed is telling us, ‘Actually, no, it’s not,’” said Wamhoff, from the Institute on Taxation and Economic and Policy. “If that’s your argument in favor of these tax cuts, no, it doesn’t work.”