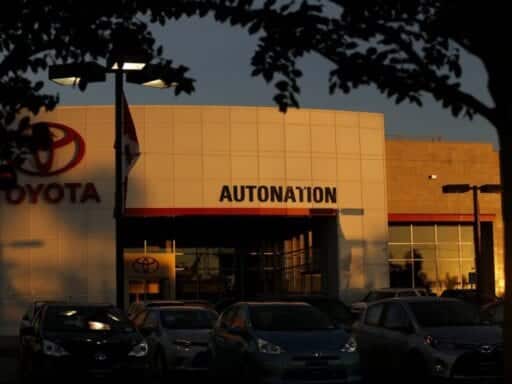 A new report found that one in nine used vehicles sold from AutoNation contained defects.

AutoNation, America’s largest car retailer, has sold customers used vehicles with unrepaired defects, according to a new report from the US PIRG Education Fund and the Consumers for Auto Reliability and Safety Foundation.

The report, which surveyed 2,429 vehicles, was conducted across 12 states at 28 different dealerships in July and August 2019. Out of those vehicles, researchers found 285 unrepaired safety recalls and determined that one out of nine used AutoNation cars contained defects, which ranged from faulty ignition switches to malfunctioning airbags.

The auto retailer currently operates more than 300 dealerships nationwide. AutoNation did not immediately respond to a request for comment from Vox.

A vehicle is marked for recall when a manufacturer determines that there’s a defect that could affect its use; typically, manufacturers notify dealers and car owners so that they can get the vehicle repaired. Unrepaired recalls could be harmful and have injured and killed hundreds of people.

While information about recalls can be found on AutoNation’s website, a PIRG spokesman said the company isn’t doing enough to notify customers about the potential risks of purchasing a vehicle.

“Overall, though, the main problem is that they’re selling these cars to begin with,” a spokesman wrote to Vox in an email. “These companies shouldn’t sell vehicles they know have unrepaired recalls and endanger customers.”

The automotive industry and retailers like AutoNation have struggled with handling recalls for years. In 2014, General Motors recalled around 29 million vehicles worldwide that had problems with seats, airbags, ignition switches, and faulty parts.

In 2015, the Takata airbag recall led to “the largest and most complex safety recall in US history,” affecting 19 automakers and millions of airbags installed in cars modeled from 2002 through 2015. The General Motors ignition switch issue has been linked to 124 deaths and the defective Takata airbags have injured more than 200 and killed 24.

While federal law prohibits dealers from selling new vehicles with unfixed recalls, there is no law that prevents used cars with similar problems from being sold. Sen. Richard Blumenthal (D-CT) and Sen. Edward Markey (D-MA) reintroduced the Used Car Safety Recall Repair Act in June 2019 to close that safety loophole. The bill is currently being reviewed by the Committee on Commerce, Science, and Transportation. The senators had previously pushed for similar legislation in 2015 but the proposal received pushback from automobile dealers and ultimately wasn’t signed into law.

In September 2015, AutoNation’s then-CEO Mike Jackson pledged in a conference call to not sell used cars with unfixed safety recalls. It was a stance that, at the time, pitted the company against the National Automobile Dealers Association, according to Automotive News.

At the time, Jackson said that around 15 percent of AutoNation’s used vehicle inventory was off limits because of new recalls every day but maintained that the company needed to keep unsafe vehicles off the road.

The company walked back on its commitment in November 2016, with Jackson admitting that it was a “valiant effort,” according to an Automotive News report. Jackson abandoned hope for regulatory action with the election of President Donald Trump, telling Automotive News that “there’s no way that issue is going to be addressed” with the Trump administration. Still, AutoNation said it intended to identify repairs and disclose them to customers, offering them a “worry-free” purchase.

“The only way that AutoNation can ensure a worry-free purchase is to repair every recalled vehicle before selling it,” said Adam Garber, the PIRG Education Fund’s consumer watchdog, in a news release.

Researchers also claimed that most AutoNation dealerships are affiliated with a manufacturer and that there is no excuse for the dealer to not make on-site repairs. “Our survey found 62 used vehicles that were being sold by AutoNation dealerships of the same make as the vehicle under recall,” the report reads.

The survey ends with specific federal and state policy recommendations that would reduce consumer risks, which includes investigating AutoNation and similar dealers who engage in “deceptive and unfair practices.”

Customers shouldn’t have to be concerned about vehicles purchased at licensed dealerships, said Rosemary Shahan, president of Consumers for Auto Reliability and Safety, especially since most repairs should be feasible. “You shouldn’t have to worry that they’re deliberately selling you a car they know has a killer safety recall defect.”

Trump finally uses the Defense Production Act to make ventilators. But that might not solve the prob...
What Nancy Pelosi said about the 25th Amendment
How Joe Biden could make Brazil his first “climate outlaw”
Pentagon report shows sharp rise in military sexual assaults
Trump’s tweet echoing white nationalist propaganda about South African farmers, explained
The tricky etiquette of giving a book as a gift