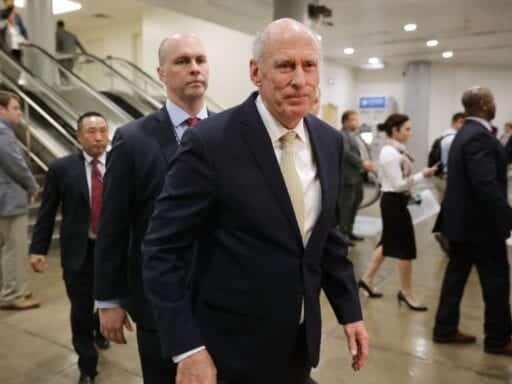 Dan Coats wants you to know that, despite what it seems, he and Trump are on the same page.

Director of National Intelligence Dan Coats is trying to downplay his surprised reaction to the news that President Donald Trump plans to invite Russian President Vladimir Putin to the White House in the fall. He says his “awkward response” wasn’t meant to be critical of the president, who is continuing to face the fallout over his performance at Monday’s Helsinki summit.

He released a statement Saturday addressing his earlier remarks, capping off what’s been a weird week for Trump and Coats all around.

During a Monday press conference with Putin, Trump seemed to indicate he believed Putin’s denials of Russian meddling in the 2016 election over the United States intelligence community’s evidenced-based assertions that Russia interfered. Hours later, Coats released a statement contradicting the president, saying the intelligence community has been “clear in our assessments of Russian meddling in the 2016 election.”

After bipartisan outrage over Trump’s performance at the press conference, the president on Tuesday claimed he misspoke when he told reporters, “I don’t see any reason why it would be [Russia]” who meddled in the 2016 election. Trump said he what he meant to say is he didn’t see why it wouldn’t have been Russia.

But that didn’t end the Trump-Coats miscommunication.

On Wednesday, Trump again cast doubt on the broad consensus within the US intelligence community that Russia is still meddling in US politics. When asked by a reporter whether he thought Russia was still targeting the US, he responded with a simple, “No.” Hours later, the White House reversed course — Press Secretary Sarah Sanders told reporters that Trump was actually saying he didn’t want to answer questions.

During a Q&A session with NBC News reporter Andrea Mitchell at the Aspen Security Forum the following day, Coats admitted he doesn’t “know what happened in that meeting” between Trump and Putin, and he was caught by surprise by Trump inviting Putin to Washington. When Mitchell told him about it, he replied, laughing, “Say that again.”

Director of National Intelligence Dan Coats informed on stage at Aspen Security Forum that the Trump administration has invited Vladimir Putin to the White House.

Per Saturday’s statement, it looks like Coats is trying to smooth things over with the president. “Some press coverage has mischaracterized my intentions in responding to breaking news presented to me in a live interview,” he said. “My admittedly awkward response was in no way meant to be disrespectful or criticize the actions of the President.”

NEW: DNI Dan Coats releases statement clarifying his reaction to learning the news that President Trump had invited President Putin to the US. via @evanperez pic.twitter.com/BvPie6k9kS

Trump’s still not getting rave reviews over the Helsinki summit

The criticism of Trump’s performance at the Helsinki summit and press conference continued into the weekend, despite the White House’s efforts to change the subject.

On Sunday, Susan Rice, former national security adviser under the Obama administration, said in an appearance on ABC’s This Week with George Stephanopoulos that it was a “historic mistake” for Trump to sit down with Putin by himself. She lamented Trump’s “tragic display of sycophancy” at the press conference, “where the president called into question yet again, standing next to Vladimir Putin, a dictator, the integrity of our intelligence community.”

Sen. Marco Rubio (R-FL) on CBS’s Face the Nation with Margaret Brennan said the White House’s mixed messaging on Russia this week was “not a good moment for the administration.”

Tom Bossert, who was Trump’s homeland security adviser before he was ousted in the spring, gave a more forgiving assessment also on This Week: He said he believes Trump’s meeting with Putin in private was “productive.” He also weighed in on the Coats debacle, saying coverage of his reaction to the Putin-comes-to-Washington news was “overblown” and he was simply being “light-hearted.”

Rep. Adam Schiff (D-CA), ranking member of the House Intelligence Committee, appeared alongside Bossert on This Week and offered a harsher point of view.

And he said Coats being kept out of the loop isn’t his fault. “The failing is that the president hasn’t even described to his own intelligence chief what he might have agreed to in that private two-hour meeting,” he said.

Kellyanne Conway: “I’m a victim of sexual assault”
3 of the world’s most powerful Covid-19 deniers have gotten the virus
Brexiteer to Irish backstop: a handy Brexit glossary
Here’s why you can’t play Fortnite’s new season on your iPhone
Apple fires back at Epic Games in the latest legal wrangling over Fortnite
Live results for the June 30 primaries