Amid calls for his removal, Trump says he’ll support the transition to a “new administration” 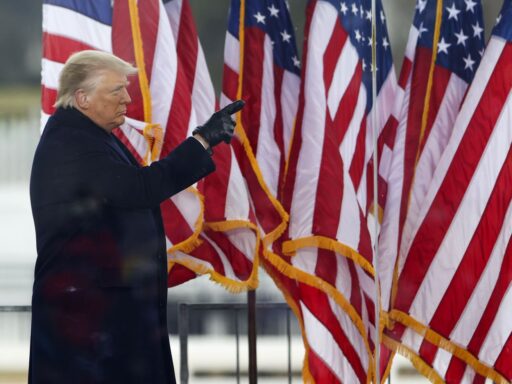 He still won’t concede the election, even with his back against the wall.

President Donald Trump acknowledged that a new administration will soon be inaugurated in an apparent attempt to quell bipartisan demands for his removal from office following Wednesday’s violent insurrection at the US Capitol — but stopped short of conceding that he had lost the November election.

“Now, Congress has certified the results and a new administration will be inaugurated on January 20,” Trump said in a video address from the White House on Thursday. “My focus now turns to ensuring a smooth, orderly and seamless transition of power. This moment calls for healing and reconciliation.”

He did not mention President-Elect Joe Biden directly. But his language was just vague enough that Republicans could interpret his speech as a concession, giving them reason to resist growing calls to impeach the president or invoke the 25th amendment to remove him from office just days before Biden is inaugurated on January 20.

But hinting at some kind of political future, he also said that he wanted his supporters to know that “our incredible journey is only just beginning.”

A majority of Democrats in the House and a growing number of Republicans, including Rep. Adam Kinzinger of Illinois, have sought Trump’s removal from office after he incited his supporters to storm the Capitol on Wednesday, resulting in the deaths of at least four people so far and significant property damage. However, Vice President Mike Pence, whose support would be needed to invoke the 25th Amendment, reportedly opposes doing so and some Republicans have said they would prefer to just wait out the last days of the Trump presidency.

Apparently recognizing his precarious political position, Trump — who has reportedly been mulling pardoning himself in the final days of his presidency — sought to distance himself from Wednesday’s events and downplay his attempts to undermine the election results.

He condemned the “violence, lawlessness and mayhem” that occurred at the Capitol and falsely claimed that he had immediately deployed the National Guard to secure the building. (Despite being quick to deploy the National Guard so in the face of last year’s Black Lives Matter protests, CNN reported that he had initially resisted doing so, requiring that Pence intervene.)

“To those who engage in the acts of violence and destruction: You do not represent our country, and to those who broke the law, you will pay,” Trump said.

Though Trump did not repeat his baseless claims of widespread voter fraud on Thursday, he echoed Republican talking points about election security, which the party has invoked as justification for making it harder for people to vote.

“My only goal was to ensure the integrity of the vote,” he said. “In so doing, I was fighting to defend American democracy. I continue to strongly believe that we must reform our election laws to verify the identity and eligibility of all voters and to ensure faith and confidence in all future elections.”

Beauty companies are changing skin-whitening products. But the damage of colorism runs deeper.
Donald Trump has some thoughts on fighting wildfires. They’re nonsense.
End-of-life planning during the coronavirus pandemic, in 8 steps
3 winners and 2 losers from the June 26 primaries
How one of Netflix’s biggest mistakes helped build its weird culture
How has the coronavirus pandemic impacted your life? Share to help Vox’s reporting.