Amy Coney Barrett used an offensive term while talking about LGBTQ rights. Her apology was telling. 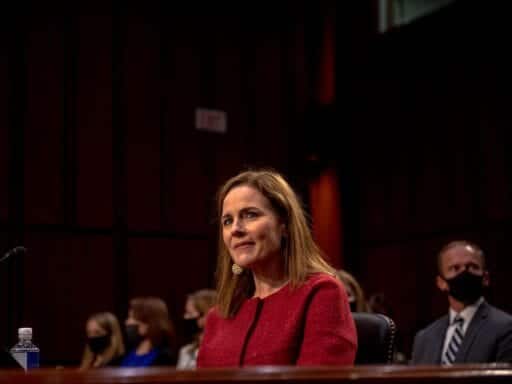 Sen. Mazie Hirono confronted Barrett about her use of the term.

The term “sexual preference,” however, is an offensive one, which suggests that sexual orientation is a choice, Lambda Legal, a legal advocacy group, explained on Twitter.

This is a dogwhistle. The term “sexual preference” is used by opponents of equality to suggest that being #LGBTQ is a choice.#BlockBarrett #SCOTUSHearing pic.twitter.com/kkftq9l2l5

Rep. David Cicilline (D-RI) said the phrase was a “1970s term.” And Slate’s Mark Joseph Stern broke down why Barrett’s use of it was so concerning:

As Jesse Bering explained in 2013, the term is similar to other expressions, like “the gay lifestyle” or “avowed homosexual,” that were once common but are now considered offensive. These phrases play into the anti-gay canard that sexual minorities are not a discrete and insular minority deserving of constitutional protections but rather deviants who should not be rewarded for their aberrant sexuality.

Sens. Mazie Hirono and Cory Booker later confronted Barrett about her statement, prompting her to apologize. “Sexual orientation is a key part of a person’s identity,” Hirono said.

Barrett’s apology, however, was also telling, signaling that she seemingly hadn’t even realized that she was using harmful language.

“I certainly didn’t mean and would never mean to use a term that would cause any offense in the LGBTQ community,” Barrett said. “So if I did, I greatly apologize for that. I simply meant to be referring to Obergefell’s holding with respect to same-sex marriage.”

Obergefell v. Hodges, the landmark Supreme Court case guaranteeing marriage equality, is among the precedents that Barrett declined to provide a position on, citing the need to maintain impartiality — an approach many nominees have taken in the past.

Her statement about “sexual preference,” however, revealed how out of touch Barrett appears to be in how she talks about LGBTQ rights, which she’d play a critical role in making judicial decisions about if she were to become a Supreme Court Justice.

A major study on Covid-19 and hydroxychloroquine has been retracted
Farms have bred chickens so large that they’re in constant pain
The disturbing reason heat waves can kill people in cooler climates
How polarization shaped Americans’ responses to coronavirus, in one chart
The Supreme Court has blocked a Louisiana abortion law — for now
Drive-ins were huge in 2020. But can they work for live music?