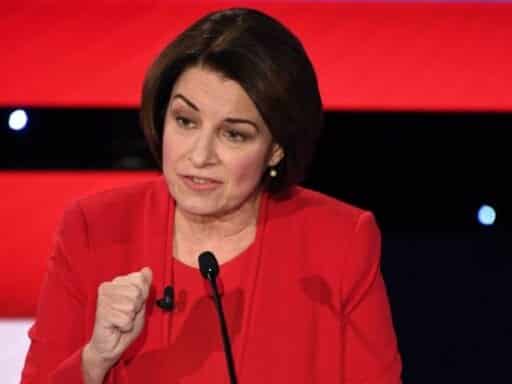 The exchanges were, in some ways, a repeat of what’s been said in many debates before. Sanders and Warren argued the risk is not doing enough, given that America spends more money on health care than other developed countries but has worse outcomes. The moderates on the stage argued that Medicare-for-all is too expensive and risks angering Americans by moving them to a new government insurance plan.

But Klobuchar made that argument more directly, and a bit more coherently, than we’ve seen in prior debates, including by bluntly stating the biggest problem for single-payer health care: the Senate.

“Over two-thirds of the Democrats in the US Senate are not on the bill that you and Sen. Warren are on,” Klobuchar said to Sanders on the debate stage.

The debate moderators unfortunately did not give Sanders a chance to respond. But as Vox has covered before, it is true that many Senate Democrats, including those who would lead the committees that write health care legislation, don’t sound on board with single-payer. (Sanders supporters generally respond to these arguments by saying they don’t think they should be compromising on their ideal plan before a new president has even been elected.)

Among Democratic primary voters, for what it’s worth, both health care plans — a public option and Medicare-for-all — are popular, though a public option does poll better at the moment. One survey taken last summer showed a little less than half of potential Iowa caucus-goers considered backing Medicare-for-all a prerequisite for their supporting a candidate.

Later, Klobuchar called out Warren, arguing that the senator’s most recent iteration of her health care plan (which differs from the Sanders Medicare-for-all bill Warren previously supported) was an acknowledgment that the center-left critiques of single-payer were correct.

The Sanders bill includes a four-year transition period and then puts everybody into one national health insurance plan. Warren now says she would start by passing a public option plan (albeit one more generous than those supported by moderates like Klobuchar, Joe Biden, and Pete Buttigieg) and then would try to pass full Medicare-for-all later in her first term.

“You acknowledge that Medicare-for-all you couldn’t get there right away. You got on the bill that said on page 8 that you would kick 149 million Americans off their current health insurance,” Klobuchar said to Warren, referencing the Sanders bill. “Then a few months ago, you said you’ll wait a while to get there. That was some acknowledgment that maybe what we’re talking about it is true.”

Given that Republicans are favored to hold on to the Senate, it isn’t just Democrats’ opposition that could doom ambitious health plans in the Senate. So the debate later turned to what candidates could do through executive actions.

Warren responded to a question about her plan to have the government manufacture some generic drugs by highlighting the administrative actions she’d take. She promised to exercise existing presidential powers to authorize the cheaper production of certain drugs even if they are still under a patent.

Klobuchar said she had “137 things” that would be legal for her to do as president in her first 100 days without congressional approval. They include allowing people to import drugs from Canada and other countries for personal use. That has been a popular idea with the public, and it’s received some bipartisan support, though experts have cast doubt that similar importation plans would actually have much effect.

In general, as several Democrats onstage took the time to point out, the Democrats agree on expanding health care and lowering prescription drug costs — the question is how.

Why Australia’s fires are linked to floods in Africa
Trump has the authority to launch nuclear weapons — whether Pelosi likes it or not
Barack Obama endorses Joe Biden for president
The race for presidential delegates has begun. Track them here.
Vox Sentences: The pope will listen to survivors
The first episode of Michelle Obama’s podcast proves it’s fun to just hang out with the Obamas