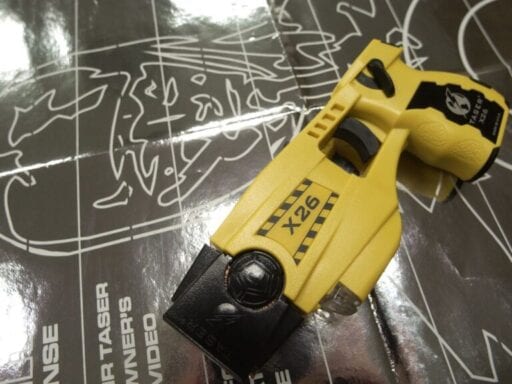 The incident isn’t the first time the Cincinnati Police Department has been criticized for using a Taser on a child.

The Cincinnati Police Department is under intense scrutiny after an off-duty police officer used a Taser on an 11-year old girl, prompting allegations of excessive force and raising new concerns about how the department uses Tasers.

The incident happened at a local grocery store on Monday. According to local reports, off-duty police officer Kevin Brown was working as a security guard at the store and suspected the girl of shoplifting. The police department claims that she was seen placing food into a backpack and did not stop when Brown approached her as she left the store. Brown then fired his Taser, striking the girl in the back.

The girl was arrested for “theft and obstructing official business” and was taken to a local hospital for evaluation. She was later released to a parent, and will go before a juvenile court at a later date.

On Wednesday the girl, a fifth-grader who remains unidentified in news reports because she is a minor, told local ABC affiliate WCPO that the incident shouldn’t have happened. “If you can’t run, then you need to get off the police force. If you can’t handle an 11-year-old child, then you really need to get off the police force. You here to protect these kids,” says Donna Gowdy, the girl’s mother.

The incident has sparked outrage and concern from Cincinnati politicians, who question why a stun gun was used on the child. “It’s hard to understand why an 11-year-old would be tased,” Cincinnati Vice Mayor Christopher Smitherman, chair of the city council’s Law and Public Safety Committee, said on Tuesday. “I expect answers in 24 hours.”

The police department has launched an investigation into the matter, and the officer involved in the incident has been placed on restricted duty. Brown was wearing a body camera at the time, but the camera was not on during the encounter.

According to the Cincinnati Police Department’s official policy, officers are cautioned to “avoid using the Taser on obviously pregnant females and those individuals under the age of 7 or over the age of 70 due to the potential for these individuals to fall when incapacitated by a taser, unless the encounter rises to the level of a deadly force situation.”

The policy also notes that “an individual simply fleeing from an officer, absent additional justification, does not warrant the use of the TASER.” Smitherman has said that he will move to have the minimum age for Taser use raised to 12 in the wake of the incident.

“We are extremely concerned when force is used by one of our officers on a child of this age,” Police Chief Eliot Isaac said in a statement on Tuesday. “As a result, we will be taking a very thorough review of our policies as it relates to using force on juveniles as well as the propriety of the officer’s actions.”

The Cincinnati incident, which follows other recent high-profile cases where police officers were criticized for using Tasers, calls attention to the ways that police use of force can be dangerous even in nonlethal incidents. But the latest Taser incident in Cincinnati also calls renewed attention to the way this particular police department uses the devices, something it has received considerable scrutiny for in recent years.

As national attention to fatal police shootings of black men and women has increased in recent years, Tasers were regularly discussed as a safer, nonlethal alternative for police officers. But that isn’t exactly how they’ve been used, with some police departments deploying Tasers to force compliance in incidents where they aren’t needed.

”It’s what we call the ‘lazy cop syndrome,’” Geoffrey Alpert, an expert on police training at the University of South Carolina, told Vox’s German Lopez in 2015. “Sometimes cops go to Tasers too early and too often.”

The Cincinnati Police Department in particular has been criticized for this. Last year, the department was criticized by local politicians and accused of displaying “horrible judgment” after officers used Tasers on two unarmed black men, one of whom had recently undergone spinal surgery, as they stood in their mother’s living room. The officers had been called to resolve a dispute at the residence.

Cases involving children and teenagers have been particularly problematic for the department. In April, the department faced protests following an incident where police fired a Taser at a black teen. The department initially justified the Taser use by saying that the boy, part of a group of teens blocking a store entrance, “became disorderly and fled on foot.”

While the race of the girl involved in the latest incident has not been disclosed in media reports, Taser use, like other incidents of police use of force, disproportionately affects black people. And it’s likely that perceptions of black boys and girls as less innocent and more adult-like than they actually are play a role in this type of force being used against them.

Tasers “are being used far more frequently than policymakers and police administrators originally envisioned,” Thomas Nolan, a criminologist at the Merrimack College of Massachusetts, told Vox in 2015. “If the same level of scrutiny was used in these use-of-force incidents as was applied to deadly use-of-force incidents, I think that would be a disincentive to using these Tasers as default self-defense weapons.”