An actor confronted Harvey Weinstein at a comedy show. Guess who got thrown out? 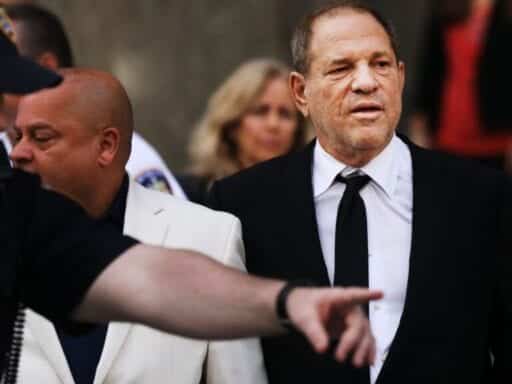 Weinstein apparently still has protectors in the entertainment industry, even after being accused of assaulting or harassing more than 80 women.

Harvey Weinstein has been accused of sexual assault or harassment by more than 80 women. News of the allegations against him helped kick off the current, most public phase of the Me Too movement. To many, he is a symbol of the way influential men can abuse their power, unchecked and even aided by those around them. He’s often held up as an example of someone accused of so many serious crimes and misdeeds that other accused men pale in comparison — maybe some people can be forgiven, the argument sometimes goes, but surely not Harvey Weinstein.

Then, on Wednesday, he walked right into a comedy show.

Specifically, Weinstein — who has pled not guilty to sexual assault charges and has denied any “consensual sexual activity” — visited Actors Hour, a monthly event for young comedians and actors at a Manhattan bar, as Amber Jamieson reports at BuzzFeed News.

When actor Zoe Stuckless confronted Weinstein at his table, they, not Weinstein, were asked to leave. “This guy was leading me out the stairs,” Stuckless told BuzzFeed, “just repeating ‘due process, due process’ to me.”

As Weinstein’s representative reminded the public in a statement, the producer has not been convicted of a crime. But the fact that a venue apparently welcomed him into an event for young actors, then punished someone who tried to criticize him, is a reminder of something that’s become apparent at this point in Me Too: While powerful men routinely compare the allegations against them to “death,” they’re often welcomed back into their old circles after only a brief departure.

In many cases, supporters of accused men, like former New Republic editor Leon Wieseltier or Sen. Al Franken, have argued that these men should be forgiven, or never punished in the first place — after all, they’re not as bad as Harvey Weinstein. As comedian Amber Rollo, who was at the event on Wednesday, put it, “I thought that everyone agreed that [Weinstein] was a bad person. Other people are questionable; he’s the worst of the worst. I thought we all knew that.”

Apparently, we didn’t. And the fact that Weinstein, whose name has become almost synonymous with allegations of sexual assault and harassment, was apparently protected by staff at a comedy club is a reminder that while plenty of powerful men have lost their jobs as a result of Me Too, the larger culture around gender and power in America has been a lot slower to change.

Harvey Weinstein showed up at an event for young actors. An actor says they were ejected for confronting him.

Weinstein arrived with “an entourage” to watch Actors Hour at the Lower East Side bar Downtime on Wednesday night, Jamieson reports. Several people called him out, with one, Kelly Bachman, addressing him from the stage.

“I didn’t know we had to bring our own Mace and rape whistles to Actors Hour,” Bachman said as part of her act, during which she also called Weinstein “Freddy Krueger.”

According to BuzzFeed, some audience members booed her, with one telling her to “shut up.”

Accounts differ as to whether Weinstein was formally invited to Actor’ Hour. Rollo, a 31-year-old actor who attended the event, said on Twitter that he had “apparently” been invited by Alexandra Laliberte, the organizer of the event. Laliberte told BuzzFeed she had not invited the producer. However, she said she allowed him to come because she thought those in attendance could address him: “I welcome all walks of life into my space.”

Laliberte told BuzzFeed that Wednesday was the second time Weinstein had come to one of her events. When asked why she allowed Weinstein to attend an event for young actors when he is accused of sexually assaulting and harassing young actors, she said, “I protect them by freedom of speech.”

And yet one young actor’s attempt to exercise freedom of speech appears to have been unwelcome.

Stuckless, 21, confronted Weinstein at his table, BuzzFeed reports. “Tell me — what’s your name?” they asked, according to BuzzFeed.

Stuckless said a man accompanying Weinstein replied that it was none of Stuckless’s business.

They say they were then asked to leave and led out by a man and woman.

Downtime later posted a statement on its Facebook page apparently referring to the incident: “Shortly into the evening, one guest began heckling another, causing a disturbance to everyone in attendance. After several requests to stop were ignored, we kindly asked the heckler to leave.”

Actors Hour, the organization that runs the monthly event, later posted a statement on Facebook apologizing “wholeheartedly for the way the situation was handled,” according to BuzzFeed.

On Thursday, a spokesperson for Weinstein told the Hollywood Reporter that the producer “was out with friends enjoying the music and trying to find some solace in his life that has been turned upside down. This scene was uncalled for, downright rude and an example of how due process today is being squashed by the public.”

“As an aside,” the spokesperson added, “Harvey in fact suggested the woman should be allowed to talk and ask him any questions. The venue’s personnel asked the woman to leave, not Harvey’s.”

Weinstein is seen as “the worst of the worst.” But apparently some are willing to welcome him back into the fold.

Some men, meanwhile, have never been asked to leave their circles in the first place. Despite allegations against them, for example, Justice Brett Kavanaugh sits on the Supreme Court and Donald Trump is president of the United States.

Meanwhile, one of the most common defenses of men accused of sexual misconduct in recent years has been that the allegations they face aren’t as bad as those against Weinstein. The producer is held up as the exemplar of someone who should be judged harshly and ousted from public life; all other accused people are measured against him. In 2017, for example, Matt Damon defended former Sen. Al Franken by saying that he and Weinstein “don’t belong in the same category.”

“There’s a difference between patting someone on the butt and rape or child molestation, right?” Damon asked.

And in 2018, when Christine Blasey Ford said that Brett Kavanaugh, then a nominee to the Supreme Court, had sexually assaulted her, White House counselor Kellyanne Conway reportedly said that the allegation against Kavanaugh wasn’t as bad as those against Weinstein.

These defenses have allowed people to explain away a variety of accusations by setting up Weinstein as the example of allegations that are truly beyond the pale.

But what happens when the accused man in question, who is at a public event in the very industry he’s accused of essentially scouring for potential victims, actually is Weinstein?

If Stuckless’s account is accurate, then what happens is people will protect him anyway. They will, instead, push out the people who justifiably feel uncomfortable. There are essentially no allegations so bad that someone won’t be welcomed back and allowed to spend time with the exact group of people on whom he is accused of preying. Nothing, apparently, is beyond the pale.

Weinstein will face trial in New York in January on charges of sexual assault. If he’s convicted, he could face life in prison. If he’s not (even though the charges cover only a tiny fraction of the allegations of which he’s been accused), the events of Wednesday night suggest that gatekeepers will allow him to be around young people in the industry, possibly even punishing them when they complain. Maybe he’ll be forgiven. In fact, maybe he already has been.

Asian American communities grapple with whether police are the right answer to recent attacks
How to make Zoom calls feel a little more like real life
When a sex offender calls, she’s there to listen
The Hiroshima anniversary: 5 things you should know about nuclear weapons today
The RealReal isn’t buying a department store anytime soon, CEO Julie Wainwright says
Fauci: 85 percent of the US needs to get the Covid-19 vaccine for “true herd immunity”