An anti-Semite ambushed a synagogue mid-service. Why extremists keep attacking places of worship. 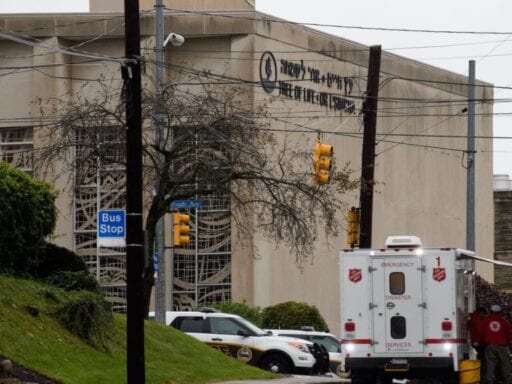 Saturday’s shooting at Tree of Life synagogue in Pittsburgh may have been the deadliest attack on Jewish people on American soil with 11 people dead and several other injured.

Suspected assailant Robert Bowers’s motive is not yet known. He is in police custody, and investigators told reporters Saturday afternoon that the shooting would be investigated as a federal hate crime. Witnesses told CBS affiliate KDKA he shouted “all Jews must die” during the attack.

The attack represents a further intensification of an insidious trend that has been proliferating steadily since Donald Trump’s campaign and inauguration: the resurgence of toxic, and at times, violent anti-Semitism in America. As Squirrel Hill, Tree of Life’s neighborhood, is considered the de facto center of Pittsburgh’s Jewish community according to a Brandeis University report, the synagogue represented a powerful symbol of Jewish life. According to preliminary reports, Bowers was an avowed anti-Semite, who made a number of posts on far-right social networking site Gab blaming Jews for, among other things, mass migration and climate change. Posts that appear to be authored by Bowers include one written about an hour before the shooting, in which the poster says, “I can’t sit by and watch my people get slaughtered. Screw your optics. I’m going in.”

But the attack on Tree of Life is part of another, wider, and no less worrying trend: the degree to which places of worship have become targets for acts that could be classified as domestic terrorism. In the past decade, houses of worship — from synagogues to Christian churches to Sikh temples — have increasingly become targets for extremist violence. Many of these attacks have been explicitly white supremacist or right-wing in nature, targeting perceived liberals, ethnic minorities, or women.

In each case, the attacks have been designed to maximize emotional effect. By targeting a house of worship, rather than a private home or business, the attacker has committed a powerful symbolic transgression: profaning a space that is both sacred and communal. Attacks on places of worship double not just as attacks on worshippers, but as attacks on the community itself.

In July 2008, gunman Jim David Adkisson opened fire at the Tennessee Valley Unitarian Universalist Church in Knoxville, Tennessee, during a church theatre production of the musical Annie, killing two people and wounding seven others. Adkisson later told police he did so because he believed that Democrats were “ruining” the United States and that all liberals should be killed, citing the historically progressive policies of the Unitarian Church. He pled guilty, and is currently serving a life sentence without the possibility of parole.

Among the largest-scale shootings at a place of worship was the June 2015 shooting at Emanuel African Methodist Episcopal Church in Charleston, South Carolina. Dylann Roof, a white supremacist who had written frequently and publicly about his desire to kill non-whites, murdered nine members of the congregation, including the senior pastor. He later expressed no remorse, writing in a prison journal, “I would like to make it crystal clear, I do not regret what I did. I am not sorry. I have not shed a tear for the innocent people I killed.” In January 2017, Roof was convicted and is currently on death row.

Another, less conventional example lies in the case of last year’s shooting at First Baptist Church in Sutherland Springs, Texas. Twenty-six people were killed in the deadliest church shooting in American history. The perpetrator, Devin Patrick Kelley, who was killed during the attack, did not have clearly-defined political views or a specific agenda. He did, however, have a well-documented history of domestic violence — in 2012 he fractured the skull of his infant stepson — and the shooting seemed to have been precipitated by conflict with his mother-in-law, who attended First Baptist.

While Kelley’s actions may not constitute a formal act of domestic terrorism the way Roof’s, Page’s, or Adkisson’s did, they nevertheless bear a key similarity: a desire to strike at the symbolic heart of a place, and to inflict maximal emotional and physical carnage. The choice of a church or temple as the locus for the shooting made the act more than just an incident of personal hatred. Instead, it became an act against a whole community. For Roof and potentially for Bowers, the choice of a house of worship intensified the emotional impact of violence.

Earlier this week, another attacker — Gregory Bush, a white man — unsuccessfully attempted to enter a predominately black church outside Louisville, Kentucky, before killing two black people in a Kroger supermarket. While his motivation is not confirmed, preliminary reports suggest that Bush may have been racially motivated; the son of a witness told local news outlet Wave3 that Bush told his father, “whites don’t kill whites.”

In each case, as in that of Saturday’s shooting, the houses of worship attacked were more than just places for services. They were community hubs, places designed for children, adults, and the elderly alike. In Knoxville, several children were present during the shooting, performing a community theatre production of Annie. At the gurdwara in Oak Creek, temple members — among them children — were cooking a langar, or a free community meal, designed to be shared with friends, relatives, and neighbors. In Squirrel Hill this Saturday, synagogue members were reported to have been celebrating a bris: the ritual circumcision of Jewish infant males, a ritual designed to help welcome a newborn into a new life, culture, and community.

After the shooting, Donald Trump initially appeared to blame the synagogue for lax security policies, telling reporters in Indianapolis that “if there were an armed guard inside the temple, they would have been able to stop” Bowers. Trump then departed for a planned rally, where he condemned antisemitism and “terrible violence.”

However, Michael Eisenberg, a former president of Tree of Life, told reporters for CNN affiliate KDKA that the synagogue makes a point of welcoming visitors to services, and that the “door is open” on Saturdays.

“It’s a religious service,” he said.

Vox Sentences: Ford testifies, Kavanaugh denies
5 people on what it feels like to have Covid-19
Here’s what WeWork is giving laid-off employees who aren’t named Adam Neumann
Elizabeth Warren compares Big Tech to Big Oil in a new fundraising ban
Why almost no one is guilty of treason, explained
China’s commitment to become carbon neutral by 2060, explained