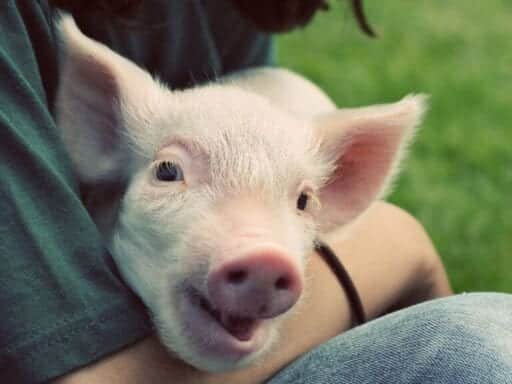 Male piglets usually have their testicles cut off without anesthetics. There’s a simple, pain-free alternative.

The meat industry is littered with small, cost-of-doing-business cruelties that are invisible to most consumers.

There are the fish, turtles, dolphins, and other marine life killed as “bycatch” in industrial fishing operations; the male chicks gassed or ground to death in egg farms where they’re unnecessary; and male pigs who are castrated, in most countries sans anesthetic, to avoid “boar taint” from making their meat overly musky.

Luckily, these tend to be instances where technological solutions can help animals while holding businesses harmless (or even helping them). Alternate gear (like green LED lights) can reduce bycatch. A process known as “in-ovo egg sexing” lets egg producers determine the sex of chicks prior to birth and abort the males before they’re capable of feeling pain.

Today I want to focus on one of the least-known tech fixes that could dramatically reduce animal suffering: immunocastration for pigs.

Right now, surgical castration of pigs without anesthetic is the norm in many countries, including the US. Its defenders, including the dominant US pork producer Smithfield Foods, argue that the procedure is necessary to avoid “boar taint,” an unpleasant odor and taste produced by the hormone androstenone and the digestive compound skatole.

Androstenone smells to many people like urine or sweat, while skatole produces the dominant smell in human excrement. The Allies used skatole as a non-lethal weapon in World War II, literally barraging Axis military units with the smell of shit (they didn’t use it in Japan because they thought the Japanese didn’t mind the smell of shit, but I digress).

And then there’s the effect of castration on male pig aggression, which eases farm management by preventing fights among the pigs. “The No. 1 reason is the welfare of our pigs and the welfare of our caretakers,” says Dave Pyburn, a veterinarian and senior vice president for science and technology at the National Pork Board.

But castration without anesthetic is, obviously, incredibly painful. A literature review from the American Veterinary Medical Association in 2013 documents extensive evidence that piglets experience pain during castration, from their high levels of stress hormones like cortisol, their squealing, and their trembling and lying alone for days following the procedure.

Policymakers in the European Union have been trying to abandon surgical castration for years; a 2010 declaration by an EU panel called for its abandonment in all EU member states by 2018, a goal that was very clearly not reached. Some countries, like the UK and Ireland, have made progress toward that goal by slaughtering pigs before puberty, which reduces pork yields.

But others like Australia, New Zealand, and Brazil use immunocastration: a sequence of two injections that block the development of a hormone that stimulates testicular growth in pigs, thereby preventing boar taint.

There’s a commercially available vaccine, marketed as Improvest in the US, for immunocastration. It’s not some kind of early stage technology; Giovana Vieira, a veterinarian and animal welfare specialist for the Humane League, reports that 1.3 million pigs undergo immunocastration every month in farms around the world. Vieira says immunocastration is “basically pain-free,” reduces mortality, and produces bigger (and more food-efficient) pigs, which both improves profits for pork producers and reduces the industry’s carbon footprint.

The pork industry’s typical excuse for not adopting immunocastration is that consumers won’t accept it; they’ll worry that the chemicals are tainting their meat. That’s not just scientifically bogus (the injections almost entirely leave the pig’s system by the time it’s slaughtered), it’s also belied by consumer polls in countries considering immunocastration, like Italy.

The National Pork Board’s Pyburn, for one, says Vieira is right on the facts: “I have seen research showing it does help in male pigs with production, and results in more efficient growth in production. There is a win there for producers if they choose to go about that.” He adds, “We’re for our producers having a choice, and this is, as of the FDA approving this in March of 2011, an option our producers can choose. But that’s up to them and based on their labor situation on their farm.”

(Smithfield Foods, the biggest pork producer in the US, did not respond to a request for comment.)

There are a lot of hard calls in the world of animal welfare. This is not one of them. If immunocastration causes higher profits for pork producers, less pain for animals, and lower carbon emissions for the planet, Smithfield and other US producers really have no excuse for not pursuing it.

Elizabeth Warren just won an endorsement that’s making Bernie Sanders’s world really mad
The White House has released a redacted version of the whistleblower’s complaint
Impeaching the president, explained
The mess that Biden’s EPA chief Michael Regan will inherit, explained
What Trump hasn’t done — and should do — about coronavirus, explained by an expert
Melting permafrost in the Arctic is unlocking diseases and warping the landscape