An engineer explains the emotion-driven evolution of car design 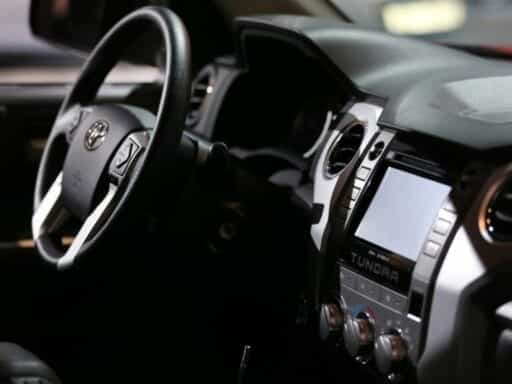 Why buttons, not touchscreens, make us feel safer.

If you drive a car, you spend a lot of time interacting with certain features of it: the cup holders, for instance, or the buttons on the center console. And designing those features for maximum consumer appeal is something ergonomics engineers (or human-factors engineers) think about a lot.

“We have to add features, add function, but keep people’s eyes on the road,” says Randy Stephens, a chief engineer at Avalon by Toyota, and it’s a challenge to “integrate all that to keep people safe and comfortable.” Practicality isn’t the most important consideration, either — a 2014 study in the Journal of Product Innovation Management found that social and emotional factors were a bigger driver of car customer behavior than things like price and gas mileage.

Other researchers have found a correlation between car design and users’ emotions. When personal items were able to be stored not only at arm’s length but in the driver’s field of vision, the consumer had a positive emotional response, which made them more likely to buy the car. But there is no predetermined set of features that can satisfy the emotions of all buyers, and what makes drivers happy changes over time. In other words, car interiors will forever be evolving because what makes people happy changes from generation to generation.

Take the cup holder, for example. It did not become a standard automobile feature until the 1980s, when demand for it became almost unanimous. The ubiquity of cup holders mirrors the expansion of suburbia, which induced longer commutes and gave birth to the modern minivan, a place where people slept, ate, drank, and played.

Cars became another living space and an extension of one’s home that should feel equally safe and comfortable. And, according to cultural anthropologist G. Clotaire Rapaille, drinking a cup of coffee in a car provides the same feeling of safety and comfort as a mother’s breast. “It was that your mother fed you, and there was warm liquid. That’s why cupholders are absolutely crucial,” he said.

Stephens has worked to perfect car features like the cup holder for 26 years. During his time at Toyota, he has seen the demands for function and aesthetic change wildly. The width of a cup holder, the height of a center console, the size of a display screen — all these unsexy things that you come to know so well are thoughtfully planned, tested with consumers, then tested again, and ergonomics engineers use the feedback to alter their designs.

During its development process for new vehicles, which takes three years, Toyota uses “customer clinics” to gather this feedback. It invites about 100 potential car buyers of different ages, races, and genders to share how they feel about anything from a new geolocation feature to the smoothness of a button. Four to five customer clinics are conducted for each new vehicle model.

Through these clinics, Stephens has learned which vehicle features make people feel safe, what’s outlived its usefulness, and what just pisses people off. Below, he explains how four of the most-used interior features have evolved over his 26 years with Toyota. His answers have been edited and condensed.

Early on, customers wanted two things — a very, very large cup holder and a lid on the cup holder. Many years ago, Avalon and Camry had these covers like push-lids. Now people are a little more reasonable about the size of the cup holder but they want a good-looking design. They are willing to look past a Big Gulp size. They also don’t want the cover or to be banging on something. A lot of people use the cup holder for their cellphones anyway.

We have customers bring their cars into the surveys, and when we go outside to look, they always have something in the cup holder; it is a very rare situation where the lid is closed and things are sort of clean and uncluttered. People are using the space for a drink or their phone or a charger. So there wasn’t much point to having lids anymore.

As consumer electronics have changed for home furnishings, home appliances, and kitchen countertops, cars are struggling to keep up. Our development takes longer.

Each product that comes out in the consumer space is usually such a giant leap forward. We have to add features, add function, but keep people’s eyes on the road. I think our challenge is really difficult — how to integrate all that to keep people safe and comfortable.

Some of the basics for us is a big screen. The bigger the screen, the better. Also, simple buttons — reducing the amount of buttons but not eliminating them is important. In the past, we would have complicated menus and lots of options, and it got to be just too much. Now it’s about a simple user experience and prioritizing what they use the most.

We [also] had an idea for an algorithm to predict where customers would like to go — so if they searched for Starbucks on navigation and they were on a long drive, we would predict they want to go to Starbucks. We put it together, and people overwhelmingly did not like it. Over 60 percent or 70 percent said they would not buy a car if it did that.

They just did not like the perception that Toyota was going to be watching them or tracking them, even though that’s what Google and Apple and everyone else does. When they get in the car, they feel like that is their place where they can kind of relax. They didn’t want to feel watched.

“Customers preferred a physical switch, a button they could touch. They really have a safety and security feel.”

People prefer a fairly simple button with a short stroke, only 1 to 2 millimeters tall, but big enough so you know where it is in the dark. It’s really about how it fits with the interior you are presenting it with. A button itself is really hard to judge; you have to see it against the multimedia screen. In general, people aren’t looking for any wild or strange buttons. Not too small.

The previous Avalon had capacitive switches, meaning we took away the button and put an area where you would touch like an iPhone, and we did get more complaints than we would like to see. Customers preferred a physical switch, a button they could touch. They really have a safety and security feel. We’ve tried many times to eliminate the switches, but our customers keep telling us they want the switches and they want the knobs.

On a cellphone, you are looking at the phone and if you press it and it doesn’t do anything, you just do it again. In a vehicle, they want a one-to-one press and release where it give them the feeling they have completed the task.

We tried a more aggressive hybrid. In the current hybrid, as you do a better job driving, you get a higher [environmental] score. If you accelerate really smoothly and brake really smoothly, you’ll get an economy score and the car will tell you did a good job. We tested a more aggressive version of that. We made a game [in the car operating system] where a ball was balancing on a cup and if the ball fell off, the screen would give you negative feedback.

What will Pride mean this year?
The 15 most interesting House races of 2018
Trump’s stimulus obstruction excites fiscal conservatives — and no one else
Sen. Bill Nelson, Rep. Debbie Wasserman Schultz barred from Florida child migrant facility
Hurricane Dorian is a dangerous Category 5 hurricane — devastating the Bahamas and heading toward Fl...
3 winners and 3 losers from the Mueller report