An ex-cardinal has been defrocked for sex abuse. This has likely never happened before. 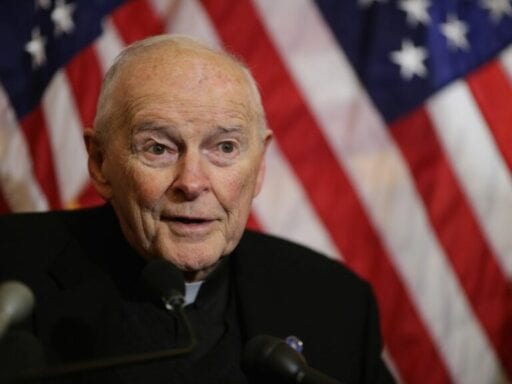 The Vatican has defrocked Theodore McCarrick, an ex-cardinal and the former archbishop of Washington, in the most significant punishment to date in the wide-scale sex-abuse scandal that has consumed the Roman Catholic Church.

McCarrick, who was accused of abusing at least three minors and harassing adult seminarians, is the most senior-level church figure to be held accountable for sex abuse allegations. Hundreds of priests have been defrocked in recent years, and all of Chile’s 24 bishops offered to resign last year in the wake of its sex-abuse scandal and alleged cover-up. But this appears to be the first time that a cardinal has been expelled from the priesthood specifically because of sex abuse.

The church’s decision comes after a series of allegations mounted over the last year. We now know that two separate New Jersey dioceses paid out settlements to McCarrick’s victims in 2005 and 2007 — a sign that the church was aware of the abuse, but tried to keep the allegations secret.

But it wasn’t until June of last year, when victims went public to The New York Times detailing the abuse, that McCarrick, now 88, was suspended from the ministry. He resigned a month later. McCarrick has maintained that he has no recollection of the allegations of abuse. But the Vatican’s Congregation for the Doctrine of the Faith found him guilty last month of several charges, including sexual solicitation during confession, “sins” with minors and adults, “with the aggravating factor of the abuse of power.” The canonical process gave him a chance for recourse, but they rejected his appeal this week. McCarrick now loses all of his priestly rights, including his housing and financial benefits, the Times reports.

As the Washington Post notes, the defrocking is the “most severe form of canonical punishment for a cleric” within the Roman Catholic Church — worse than excommunication, which lasts only as long as the person “persists in sin.”

It’s a monumental step that until now the church has been unwilling to take, coming more than 50 years after McCarrick’s alleged abuse first began.

This a historic step for a powerful institution that for decades has been accused of shielding its leaders from any meaningful form of punishment — no matter how unsettling the allegations of abuse.

Still, there are limitations to the steps toward accountability. The instances of abuse by McCarrick that we know of exceed the statute of limitations, meaning he likely can’t be criminally prosecuted for his actions. (He feasibly could have been held accountable in court earlier — as Vox’s Tara Isabella Burton noted in August, McCarrick’s behavior was an open secret inside and outside the church.)

That’s the culture that Pope Francis has been pressured into trying to change. He’s made strides to address the legacy of abuse and lack of accountability for the most powerful church leaders, but to mixed success. He’s gotten into trouble for casting doubt on some accusers and faced calls for resignation, as Burton notes:

Shortly after becoming pope, Francis announced the creation of a Vatican committee to fight sex abuse in the church. In 2014, he named eight people, including one clerical abuse survivor, Marie Collins, to that committee. He also publicly apologized for the Vatican’s actions, expressing regret that “personal, moral damage” had been “carried out by men of the Church.” He also urged any priest who had enabled abuse by moving an abuser to another parish to resign.

However, progress has been slow. In 2016, the Vatican committee scrapped a proposal that any senior cleric accused of covering up abuse be subject to an internal tribunal, angering victims’ advocates. That same year, Collins stepped down from the committee, calling the Vatican’s lack of progress “shameful.”

McCarrick’s defrocking is the latest sign Francis hopes to meaningfully address the clerical sex abuse crisis. Francis will have an opportunity to turn that legacy around — next week he is hosting an unprecedented summit dedicated specifically to rooting out abuse.