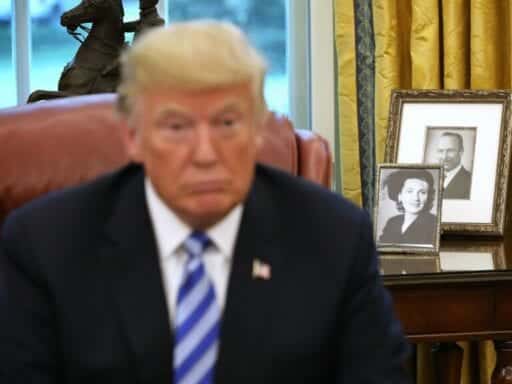 Trump said he got a $1 million loan from his dad. A Times investigation reveals he got $400 million.

The New York Times on Tuesday published the results of an investigation into President Donald Trump’s wealth and tax practices, uncovering a pattern of tax evasion and business practices that allowed Trump to receive at least $413 million in today’s dollars from his father.

David Barstow, Susanne Craig, and Russ Buettner at the Times released the results of an investigation into Trump’s finances and those of his family — namely, his father, Fred Trump. They found that Trump and his siblings got hundreds of millions of dollars of dollars in today’s money from his father’s real estate empire, starting when they were children:

Much of this money came to Mr. Trump because he helped his parents dodge taxes. He and his siblings set up a sham corporation to disguise millions of dollars in gifts from their parents, records and interviews show. Records indicate that Mr. Trump helped his father take improper tax deductions worth millions more. He also helped formulate a strategy to undervalue his parents’ real estate holdings by hundreds of millions of dollars on tax returns, sharply reducing the tax bill when those properties were transferred to him and his siblings.

The IRS, according to the Times, didn’t really notice it. Trump’s parents transferred more than $1 billion to their children and paid about $52.2 million in taxes. Given the relevant tax rates on gifts and inheritances, they should have paid about $550 million — 10 times more.

The Times didn’t see Trump’s own tax returns. But the reporting, which was based on documents, records, and interviews pertaining to Trump’s father’s financial empire, suggests that Trump’s actions on paying taxes weren’t always aboveboard, even if they were too long ago to be criminally prosecuted.

According to the Times, when Donald Trump’s finances were “crumbling” in the 1980s and ’90s, Fred Trump’s companies increased distributions to him and his siblings. From 1989 to 1992, for example, four entities created by Fred paid Donald $8.3 million in today’s dollars.

When Donald Trump’s finances were at their worst in 1990, Fred Trump’s income shot up to $49,638,928 and earned him a $12.2 million tax bill. The publication reports that there are indications Fred Trump “wanted plenty of cash on hand to bail out his son if need be.”

It wasn’t always Fred bailing out Donald — the pair worked together, especially as the elder Trump aged and his children had to continue the tax schemes their parents had put in place. In 1997, for example, about a year and a half before Fred Trump’s death, Donald and his siblings gained control of most of their father’s empire. They undervalued the properties significantly, claiming they were worth $41.4 million and selling them off over the next 10 years for 16 times that amount.

The transfer of wealth between Fred Trump and Donald Trump (as well as his other siblings) was a lifetime affair:

By age 3, Mr. Trump was earning $200,000 a year in today’s dollars from his father’s empire. He was a millionaire by age 8. By the time he was 17, his father had given him part ownership of a 52-unit apartment building. Soon after Mr. Trump graduated from college, he was receiving the equivalent of $1 million a year from his father. The money increased with the years, to more than $5 million annually in his 40s and 50s.

As the Times notes, the line between tax avoidance and tax evasion is a blurry one, and wealthy people employ a variety of tricks to lower their taxes all of the time. But since President Trump has refused to release his tax returns, investigations such as this one raise even more questions about what might be hiding in his finances.

The New York state taxation authority, reacting to the Times’s report, said it would review the allegations and is “vigorously pursuing all appropriate avenues of investigation.”

Statement from the NY State Taxation authority, regarding this blockbuster NYT story: “The Tax Department is reviewing the allegations in the NYT article and is vigorously pursuing all appropriate avenues of investigation.” https://t.co/rACzwJPPx0