Anatomy of a lie: where Trump’s fictitious “Open Borders Bill” comes from 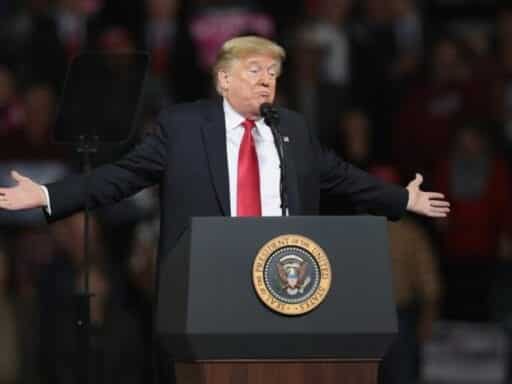 A snowball of cascading exaggerations.

Lesser politicians merely exaggerate or spread fear about what the opposing party would do if they took power in Congress. President Donald Trump is inventing specific pieces of legislation.

Trump’s now rallying supporters by warning them that if Democrats take back the Senate, they’ll pass a bill written by Sen. Dianne Feinstein (D-CA) called the “Open Borders Bill.”

No such bill actually exists.

Here’s what Trump told a rally audience in Topeka, Kansas, on Saturday:

Here is the part of Trump’s riff about Democrats that is correct: There is, in fact, a bill that Feinstein has written that every Democrat in the Senate has signed on to.

It is, of course, not called the Open Borders Bill, because it’s not actually about opening the borders at all. It’s called the Keep Families Together Act; it was written in June, during the height of the family separation crisis at the US-Mexico border, to stop the administration’s “zero tolerance” policy of criminally prosecuting parents who crossed into the US illegally and sending their children into the care of the Department of Health and Human Services.

Feinstein’s bill — probably by mistake — would have prevented parents from being arrested for serious crimes by the FBI, not just from getting separated at the border. But the good-faith critiques of the bill snowballed into an assertion on the right that Democrats were going to open the borders — and, furthermore, that that was the point.

How the Keep Families Together Act became the Open Borders Bill

On June 7, Feinstein introduced the Keep Families Together Act. Within days, it had been co-sponsored by every Democrat in the US Senate. The bill went nowhere — Sen. Chuck Grassley (R-IA) made no effort to move it through the Senate Judiciary Committee — and it existed mostly as a foil for Republican proposals to end family separation by allowing the government to keep families in immigration detention indefinitely.

The point of Feinstein’s bill was to end “zero tolerance” by prohibiting agents from separating parents from children, except in cases of abuse or endangerment.

As written, though, it didn’t apply just to Border Patrol officers’ apprehension of families or to the prosecution of parents for misdemeanor immigration violations. Under the bill, no agent of the Department of Homeland Security, the Department of Health and Human Services, or the Department of Justice would be able to separate a parent from children anywhere within 100 miles of a US border.

In other words, as Gabriel Malor pointed out in an article for the Federalist, “The proposed law would apply with equal force to, say, FBI agents (part of DOJ), Secret Service agents (part of DHS), and Centers for Disease Control officers (part of HHS) in the exercise of their everyday duties.”

That includes arresting people for serious crimes, since adults can’t be taken into criminal custody with their children. (This was the whole reason “zero tolerance” led to family separation to begin with). And the 100-mile zone legally defined as the “border” encompasses nearly two-thirds of the US population.

It’s impossible to recognize an accurate critique — that Democrats had (probably accidentally) written a bill that would protect parents from federal arrest in much of the US — in Trump’s attacks on the “Open Borders Bill.” But there was a seed of truth inside a snowballing exaggeration about what the bill would do, and what Democrats’ intention was in drafting it. Here’s a timeline of that evolution:

From there, Trump’s only innovation was to lie about the name of the bill. In doing so, of course, he cemented both the idea that Feinstein’s bill would actually “open the borders” (i.e., prevent apprehension of any unauthorized immigrant entering the US) and the idea that this was intentional.

It fits ever so neatly into Trump’s closing electoral argument, that he and Republicans are the only thing standing between America and mob rule. But thanks to the game of attack-ad telephone, Trump’s claims bear so little resemblance to reality that it almost feels academic to point out their distant ancestor in truth.

“America’s surrender”: What Afghans think about US-Taliban peace talks
Airlines are to blame in the debate over reclining plane seats
What we know about the Atlanta shootings that left 8 dead at Asian businesses
SpaceX finally sent humans to space. What happens next?
Covid-19 made America’s long-term care crisis impossible to ignore
Trump is making a mockery of Bill Barr