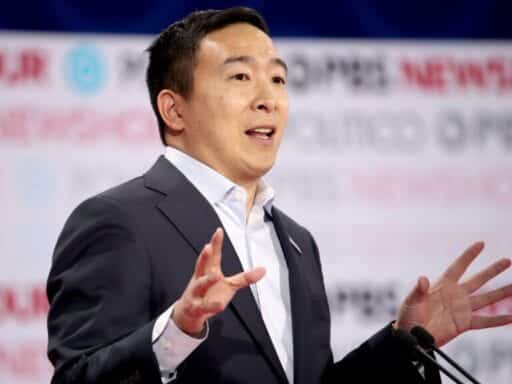 Climate change is already forcing people to move. Yang has a plan for getting them out of harm’s way.

Almost every 2020 Democratic contender for president has put out a plan for how they will tackle climate change. Some of these plans are quite robust and thorough, dealing with how to transition the economy to cleaner energy, invest in new technologies, and help fossil fuel workers who might lose their jobs in the process.

But few have addressed one of the thorniest challenges of climate change: the fact that many Americans are being or will be forced out of their homes because of severe flooding, wildfires, or other events exacerbated by warming. It’s an expensive proposition to relocate them, and we don’t have a good track record of getting it right.

Many scientists say that even if the US reduced its carbon footprint to zero by the year 2050, the damage will have been done. Climate change will have made certain places in the US unlivable. Knowing this, would you support a new federal program to subsidize the relocation of American families and businesses away from places like Miami or Paradise, California, perhaps, Davenport, Iowa, because we know these places will be hit time and time again?

Vermont Sen. Bernie Sanders avoided the question. “It is not an issue of relocating people in towns,” he said. “The issue now is whether we save the planet for our children and our grandchildren.”

Entrepreneur Andrew Yang was the only candidate to take it head on. “First, we should obviously be paying to relocate Americans away from places that are hit by climate change. We’re already doing it,” he said. “Part of my plans literally call for moving people to higher ground because that’s what we need to do.”

In his climate plan, he calls for $40 billion in grants, loans, and subsidies to relocate people in vulnerable areas. It’s something that other candidates are reluctant to talk about in such blunt terms, as Vox’s Dylan Matthews observed:

This is an unusual posture for a campaign, simply due to how bleak it is. Part of the political logic of a Green New Deal involves thinking of climate action as a hopeful possibility that brings with it jobs, investment, and a better quality of life. Yang is arguing, instead, that we have to accept that climate change is already having an impact and has to be accommodated as well as mitigated.

As the risks of coastal flooding and wildfires grow steeper, the idea of a managed retreat of homes, businesses, and infrastructure from vulnerable areas toward safer regions becomes a more urgent option to consider. And as the damage from these threats gets higher, it may be the only option.

Americans have already been forced to relocate from areas like Isle de Jean Charles in Louisiana due to sea level rise. But the government has been helping them in a haphazard way, often with emergency provisions under Federal Emergency Management Agency, rather than with a coordinated proactive strategy.

Yes, it’s still possible to limit warming, and it will require aggressive cuts in greenhouse gas emissions to avoid the worst-case scenarios. But there are impacts of climate change that are already baked in — cities like Miami are already facing high-tide flooding, for instance.

About 40 percent of the US population lives in a coastal county, so millions more will feel the ripple effects of sea-level rise alone. Add to that the jobs and lives that will face irreversible changes from persistent heat waves, wildfires, and drought, and you have huge pressure on the next president to figure whether people in these areas should stay and rebuild or preemptively pull back.

Telling people where they can and can’t live is a huge political challenge, one that’s bound to cause enormous headaches for the next White House. But the problem will only get worse, and the other candidates need better answers.

The eerie surreality of sports in the Covid-19 bubble
Elizabeth Warren just won an endorsement that’s making Bernie Sanders’s world really mad
Why Asians in masks should not be the “face” of the coronavirus
Australia is trying to figure out who’s sticking needles in strawberries
Is Trump a fascist? 8 experts weigh in.
Game of Thrones season 8: episode recaps and reviews, spoilers, news, and analysis