Andrew Yang’s use of Asian stereotypes is reinforcing toxic tropes 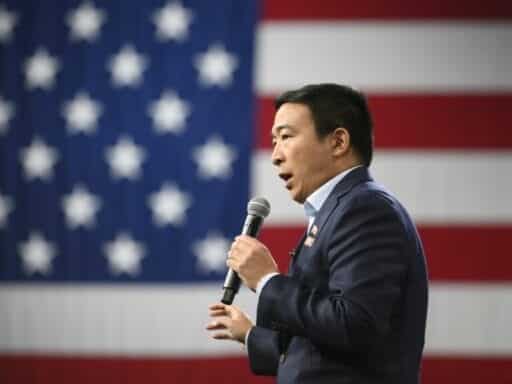 During the third Democratic debate, Andrew Yang made a joke that played up an Asian stereotype: “Now, I am Asian, so I know a lot of doctors,” he quipped.

It wasn’t the first time he’d done so. Two months earlier, during the second debate, he told viewers, “The opposite of Donald Trump is an Asian man who likes math.”

Yang has also used such one-liners at rallies, and sold merchandise alluding to these comments, including baseball caps and T-shirts simply emblazoned with the word, “Math.”

Yang’s statements have spurred mixed reactions from the Asian American community. While some of his supporters told Vox that the jokes are cheeky in-group references that acknowledge Yang’s Asianness, other voters are concerned they reinforce longstanding racist stereotypes about Asian Americans and other minority groups.

“I feel like it’s an in-group kind of comment. He is, himself, an Asian American, so he has the right to mention or allude to that stereotype on his terms,” Yang supporter Mudit Verma told Vox, regarding the candidate’s recurring math references.

University of Maryland American studies professor Janelle Wong is among those who feel differently. “I think he has done so much to counter stereotypes that it undermines a lot of the important work that his campaign is doing,” she told Vox.

Yang himself has said that he’s using these comments to “[poke] fun” at stereotypes and call for “Americans [to] reflect a little bit more on them.”

While Yang may have innocuous intentions with his comments, as he said in an interview with CNN’s Jake Tapper this past weekend, the remarks are nonetheless reaffirming toxic tropes. Given his role as a high-profile Asian American presidential candidate, his message is setting the tone for how many people may see Asian Americans and perpetuating a damaging caricature in the process.

Yang’s statements on this subject matter because of how high-profile he’s become as a presidential candidate. This cycle, Yang is one of three historic Asian American and Pacific Islander candidates, a milestone that’s been a source of pride for many Asian Americans I’ve spoken with.

Because of his ascent to prominence, however, his words carry significant weight and frame not only his own candidacy, but how Asian Americans are perceived overall.

Some Asian American voters have found Yang’s comments humorous and argue that they’re memorable one-liners, while others see them as amplifying troubling stereotypes.

“I am Asian, so I know a lot of doctors” Okay @AndrewYang got points from me there #DemocraticDebate

“I’m Asian so I know a lot of doctors.” LOL @AndrewYang. He also said that we are talking about healthcare all wrong. It should be a given, a right, so that Americans can go about living our lives & fulfilling our dreams. Agree! #DemDebate

Yang has also used his platform to weigh in on other scandals about racism against Asian Americans, including the controversy over comedian Shane Gillis, who had been hired — and then fired — as a new Saturday Night Live cast member after old videos were unearthed of him using racist and homophobic slurs. These statements have also spurred pushback; some argued Yang could have been more forceful in his response.

Yang condemned Gillis’s past remarks, including his racist comments about Asian Americans. But even in that condemnation, he waded into controversy himself, comparing Gillis’s insults to slurs faced by other minority groups and the type of backlash those would have received. In doing so, critics say he used the bigotry black people face in America to advance his own arguments and washed over any nuances in how each group has been treated in the past.

Yang told the New York Times’s Matt Stevens that his posts were meant to convey an “observation” and weren’t aimed at drawing a comparison between being Asian American and “the experience of growing up black in this country.” He’s also emphasized that he’s interested in having a dialogue with Gillis.

I’ve been called chink and gook any number of times in my life. It can be extraordinarily hurtful to feel like you are somehow not part of the only country you have ever known. I have certainly felt that – the churning sense of alienation, anger and marginalization.

It’s also the case that anti-Asian racism is particularly virulent because it’s somehow considered more acceptable. If Shane had used the n word the treatment would likely be immediate and clear.

The model minority myth has been used to hurt minority groups

There’s a major reason why Yang’s broader use of stereotypes is so harmful: they help reaffirm a trope about Asian Americans commonly known as the “model minority” myth, a term that’s pretty much as offensive as it sounds.

Trying to keep an open mind about Andrew Yang but his willingness to lean into Asian American stereotypes in order to pander to white audiences is…. disappointing

As the name suggests, this myth, which has previously been used to treat Asian Americans as a monolithic group, implies that Asians are fixated on school and certain professions, and is damaging for a lot of reasons. It not only obscures the diversity within the Asian American community, it’s also intended to demean other minority groups, Alton Wang writes for the Washington Post:

Writing in the New York Times in 1966, the sociologist William Petersen coined the term“model minority” to describe the post-World War II rise of Japanese Americans, even in the face of ongoing prejudice. He contrasted their success to that of what he called “problem minorities” (a term that he set in quotation marks that clearly pointed toward black Americans), groups pulled down by oppression to the point where they would greet even equal opportunity with “either self-defeating apathy or a hatred so all-consuming as to be self-destructive.”

Whatever Petersen’s intentions, this contrast exposes the real function of the model-minority myth: It rests not on the laurels of Asian American success, but of black oppression and perceived cultural failure.

The myth has been used to pit different minority groups against one another, Wang writes. Additionally, it reinforces the perception that Asian Americans can only be one thing, and in doing so masks the wide range of interests, backgrounds, and needs within the community itself, the blog Reappropriate points out:

Every time the Model Minority Myth is misrepresented as fact, we render invisible the real facts about Asian Americans. We fail to see the staggering wealth gap among Asian Americans which leaves more than 10% of Asian Americans living below the poverty line. We ignore evidence that the poverty rate is several times higher for some Asian American ethnic groups, whose members also struggle with far reduced access to college.

Andrew Yang jokes that as an Asian, he knows a lot of doctors — implying that many Asian Americans are culturally-inclined to become (or befriend) doctors. This joke forgets how US immigration selects for promising, well-educated Asian immigrants creating a skewed perception of who Asian Americans are.

Yang told Tapper this past weekend that he does not claim to represent the entirety of the Asian experience, though he didn’t provide a particularly satisfying answer for why he’s opted to use these stereotypes.

“The Asian American community is very diverse, and certainly I would never claim that my individual experience would speak to the depth and the breadth of our community,” he said. “At the same time, I think Americans are very smart and that they can actually see right through that kind of myth. And if anything, by poking fun at it, I’m making Americans reflect more on it.”

It’s possible that Yang’s comments could spur some voters to do just that, but it’s also possible that they simply fuel other, more pernicious perceptions.

This contradiction speaks to a core tension in his candidacy: The degree of representation he’s embodying for Asian Americans on the national stage has been significant and inspiring, but the messages he’s sending voters aren’t celebrating his identity so much as using it as a punchline.

Stories that tell us how to live in, and after, a pandemic
American “heroes” get the spotlight in Biden’s virtual inaugural parade
Trump mocks Elizabeth Warren’s heritage with talk of offering her a DNA test
This week in TikTok: Internet fame under quarantine
As our April book club pick opens, New York City is born. What happens next?
I’m American, and I’m multilingual. Why does it feel so scary to speak in another language in publi...