Anita Hill: Kavanaugh accuser should get a “fair and neutral” investigation 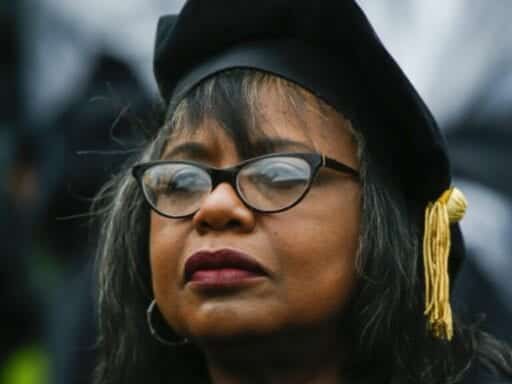 “I have seen firsthand what happens when such a process is weaponized against an accuser.”

Anita Hill accused Clarence Thomas of sexual harassment during his 1991 Supreme Court confirmation process — and Thomas was confirmed anyway. Now, according to Politico, she wants to make sure the Senate Judiciary Committee investigates Brett Kavanaugh.

The New Yorker reported Friday that a woman has accused Kavanaugh of holding her down and attempting to force himself on her when she and Kavanaugh were both in high school. A letter containing her allegations was shared with Sen. Dianne Feinstein (D-CA), who’s since passed it on to the FBI.

Through a spokesperson, Hill told Politico that the Senate Judiciary Committee needs to put a process in place so that sexual misconduct allegations against judicial nominees can properly be heard. Hill argued in her statement that the woman who’s accused Supreme Court nominee Brett Kavanaugh of attempting sexual assault should get a “fair and neutral” investigation — something she was notably denied.

“The reluctance of someone to come forward demonstrates that even in the #MeToo era, it remains incredibly difficult to report harassment, abuse or assault by people in power,” the statement said. “Given the seriousness of these allegations, the government needs to find a fair and neutral way for complaints to be investigated.”

She continued: “The Senate Judiciary Committee should put in place a process that enables anyone with a complaint of this nature to be heard. I have seen firsthand what happens when such a process is weaponized against an accuser, and no one should have to endure that again.”

Hill is now a professor of law, social policy, and gender studies at Brandeis University, and she leads a Hollywood commission seeking to root out sexual harassment.

As Vox’s Anna North points out, the parallels between Thomas and Kavanaugh’s confirmation processes are striking.

In 1991, Hill was widely smeared by the press after she came forward with harassment allegations against Thomas, one of her former managers, and Democrats, including then-Sen. Joe Biden, declined to call more witnesses who could have backed up Hill’s account.

This time, Feinstein, who reportedly received the letter in July, didn’t ask Kavanaugh about the allegations during the confirmation hearing — and did not disclose more information to her colleagues until this week.

Joe Biden will have a very hard time winning over the Berniesphere
The Terror: Infamy turns America’s WWII internment camps into a bleak ghost story
The US should prioritize reopening schools, not salons and restaurants
The controversy over “Kylie Jenner, self-made billionaire,” explained
A modest proposal to save American democracy
Vox live results: Joe Biden wins the presidency