Another global climate strike is coming Friday. These kids aren’t giving up. 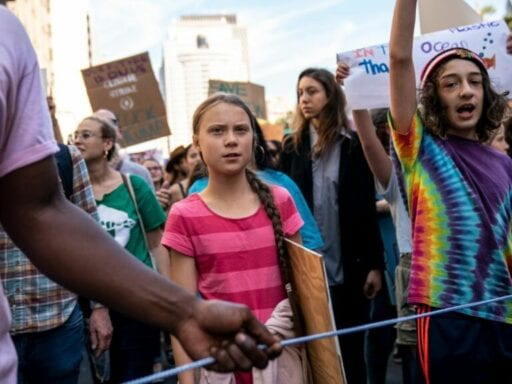 Greta Thunberg is targeting the airline industry this time.

Another youth-led climate strike is planned for Friday, September 27, a week after organizers rallied more than 4 million people across more than 150 countries into the streets in a strike to demand action on climate change.

“My message is that we’ll be watching you,” she said. “We are in the beginning of a mass extinction, and all you can talk about is money and fairy tales of eternal economic growth.”

While 67 countries this week indicated their intention to enhance their commitments to climate action under the Paris climate accord by the end of 2020, the summit failed to deliver big commitments to limit greenhouse gas emissions from the world’s largest emitters: China, the United States, and India.

Ultimately, youth activists didn’t get all of the results they wanted, but the summit showed they changed the conversation around climate change on the international stage. World leaders noted that such an event would not have happened without the pressure from young people.

“Each week for months and months now we’ve had young people speak,” said French President Emmanuel Macron. “I think they’ve identified an absolute urgency that we have to respond to here.”

And so youth and other campaigners are planning to keep up the pressure, continuing the weekly strikes that preceded the massive demonstration last week with another one this Friday. Dozens of events are planned around the world.

Unlike last Friday, public schools in New York City won’t excuse students to attend the strike. But Italy’s education minister Lorenzo Fioramonti wrote on Facebook that he invites students and families to participate in the strike in his country. In Washington, DC, activists may try to snarl traffic in the morning by blocking key intersections, as they did on Monday.

Thunberg is planning to attend a climate strike in Montreal, Canada, outside a meeting of the International Civil Aviation Organization, a UN agency. She gave up flying (and sailed to the US for the summit) because of what she learned about the impact of the aviation industry on the global climate. It produces 2.4 percent of global emissions, but there are few options for shrinking this footprint and demand for air travel is poised to surge in the coming decades. She and other activists want airlines and regulators to do much more to limit those emissions.

Immigrant kids crying audio played on House floor
2 Reuters journalists jailed in Myanmar for covering atrocities against Rohingya were pardoned
You don’t have to love Star Wars to dig The Mandalorian
Today, Explained: Greatest Hits
What Bill Barr’s memo and Mitch McConnell’s speech mean for the election
Exclusive polling: What likely voters want to see in a Biden Cabinet