Another top Democrat signals openness to abolishing the filibuster 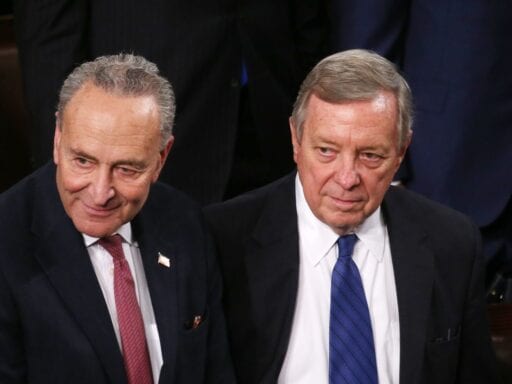 Senate Minority Whip Dick Durbin (D-IL) indicated on Sunday that Democrats are engaged in serious discussions about abolishing the filibuster should their party regain control of the Senate in November.

Speaking on On ABC’s This Week, Durbin was noncommittal about where the Democratic Party’s discussions may lead, but said talks about changing the Senate’s rules are now necessary because he believes Senate Majority Leader Mitch McConnell has caused the “destruction” of the US Senate.

This Week host George Stephanopoulos specifically asked whether Durbin backed Sen. Ed Markey’s (D-MA) proposal that Democrats expand the Supreme Court and scrap the filibuster, a rule that effectively creates a 60 vote threshold for passing major legislation when the party is next in control of the Senate.

“The conversation about the future of the Senate rules is on the table, and I’m part of it,” Durbin replied. “The reason is this: we have seen under Mitch McConnell the destruction and the denigration of the United States Senate.”

NEW: “A conversation about the future of the Senate rules is on the table … we have seen under Mitch McConnell the destruction and denigration of the (Senate),” Sen. Dick Durbin says on calls from some Democrats to end filibuster and expand Supreme Court. https://t.co/xyScz0SW2y pic.twitter.com/TllFTXbSPX

Durbin did not comment on the question of expanding the Supreme Court, but he did suggest that Democratic leadership is warming to the idea of the sweeping rules change, which would allow legislation to be passed through a simple majority vote. Durbin suggested that a simpler process would allow the Senate to pass more legislation.

“Last year in the Senate, 2019, we had 22 amendments voted on in the entire year,” he said. “Mitch McConnell has taken the Senate and turned it into something that is not even close to a deliberative and legislative and body — we need to make sure that whatever the procedure is in the future that we get down to business.”

Jettisoning the filibuster is an idea that’s gained a great deal of attention in liberal circles in recent years, with figures like Sen. Elizabeth Warren (D-MA) endorsing the idea. Following McConnell’s choice to violate the precedent he set in 2016 on considering Supreme Court justices for nomination, a greater number of Democrats, including more moderate lawmakers, have advocated for radical changes to the Senate.

Not all Democrats share Schumer’s aggressiveness so far, however. On CNN’s State of the Union, Joe Manchin (D-WV), one of the party’s most moderate senators, said that he wouldn’t support expanding the Supreme Court or getting rid of the filibuster.

“The whole premise of this Senate and this democracy experiment of ours is certain decency and social order that basically has been expected from us and especially from the Senate from the beginning of our government,” he said.

Abolishing filibuster is becoming a bigger and bigger target for Democrats

The battle between Democrats and Republicans over filling the vacancy left by the late Supreme Court Justice Ruth Bader Ginsburg right before a presidential election has sparked a broader discussion of norms in government. And whether the filibuster ought to be part of those norms has become an important part of that discussion.

The use of the filibuster to block legislation unless it can surmount a 60 vote threshold has increased since the 1970s — and it skyrocketed during the Obama administration; political scientists say Republicans have spearheaded its increased use.

Since it’s extremely rare and difficult for a party to control 60 seats in the Senate, the 60 vote threshold has the effect of dramatically dampening a majority party’s capacity to pass bills. Ending the filibuster would allow legislation to pass the Senate with a simple majority of more than 50 votes.

Prominent Democrats have warmed to the idea in the past year in the past several months. Sen. Chris Coons (D-DE) was once a passionate defender of the rule — but earlier this summer he expressed openness to getting rid of it.

At the funeral of civil rights icon and congressman Rep. John Lewis in July, former President Barack Obama offered his strongest criticism of the filibuster to date, arguing that it was a persistent obstacle to civil rights legislation.

“If all this takes eliminating the filibuster, another Jim Crow relic, in order to secure the God-given rights of every American, then that’s what we should do,” Obama said.

Democratic presidential candidate Joe Biden, who spent more than 35 years as a senator and has historically supported the filibuster, said in July that he’s open to Democrats scrapping the rule. He framed it as something that Democrats would consider if Republicans refused to cooperate with them even after losing the Senate.

“It’s going to depend on how obstreperous they become,” Biden said on a call with reporters. “But I think you’re going to just have to take a look at it.”

Biden has since tempered those remarks, but Durbin’s statement Sunday suggests that among those who are still in the Senate, there is a serious willingness to, at the very least, consider changing the rule.

Four winners and three losers in the South Carolina Democratic Primary
Why Israel is leading the world in vaccinating its population
There’s more to life than profit
Anita Hill: Kavanaugh accuser should get a “fair and neutral” investigation
What far-right extremists have planned for inauguration weekend
“King-Lee Day” and other ways states bend MLK’s legacy