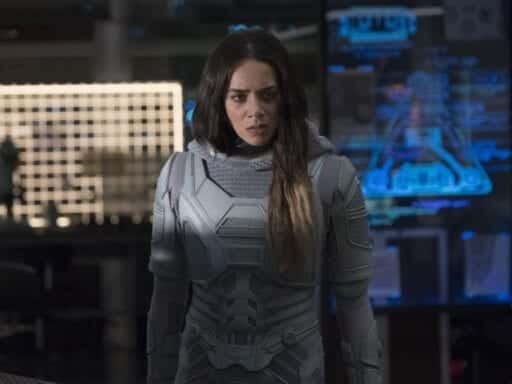 The Ant-Man films have increasingly blurred the line between good and bad.

As far as superhero movies go, it’s usually pretty easy to tell who the villain is. In Ant-Man and the Wasp, it seems to be Ava Starr (Hannah John-Kamen), also known as Ghost, who shows up in a cool (but creepy) super suit to throw a wrench into our heroes’ plans. Where Scott (Paul Rudd) and Hope (Evangeline Lilly) can shrink or grow, Ava can phase through objects — hence the moniker. It’s unsettling to see her in action, especially given how ruthless she seems to be.

But director Peyton Reed isn’t interested in a clear-cut villain vs. hero dichotomy. As the movie progresses (be warned of spoilers), Ava’s story turns out to be a tragic one. And unlike the first film’s Darren Cross (Corey Stoll), she isn’t trying to sell Pym technology to Hydra or engineer any kind of mass chaos for profit: She’s only trying to save herself. The way her body phases isn’t really under her control, and she’ll die if she doesn’t stabilize soon.

Ava is sympathetic to the degree that the revelation about the involuntary nature of her power leaves the movie with a bit of a villain vacuum. It’s ostensibly filled by Sonny Burch (Walton Goggins), who, in the best way possible, is a caricature of many of the fast-talking roles Goggins has played before. Burch is so relatively one-note in a film that’s meant to accommodate shades of gray, however, that his cartoonish villainy almost seems like a cover-up for the fact that one of the movie’s ostensible protagonists might be less heroic than he seems.

However indirect this is, it’s Hank Pym’s (Michael Douglas) sense of pride that made Ava the way she is. And lest we forget, although Darren certainly had issues of his own, a lot of his emotional baggage came from Hank, too. As the two Ant-Man films have increasingly blurred the line between good and bad, has Hank Pym become a villain? Though his research is arguably for the greater good, the collateral damage he’s wrought to accomplish that research spins a darker story.

The origins of both Ant-Man movies’ apparent villains can be traced back to Hank. He’s a surrogate father to Darren. And Hank’s eventual abandonment of Darren (which wounds him so deeply we see him come close to tears recounting it) is what drives Darren to create the Yellowjacket suit. Notably, when Darren asks Hank why he turned away from him, Hank’s answer is that he saw too much of himself in the young man.

That acknowledgment of Hank’s darker side is easy to overlook in 2015’s Ant-Man, given that Darren turns out to be a full-blown psychopath (and suffers a true supervillain’s death of being crushed into nothingness). But it’s impossible to ignore in the franchise’s second installment.

It’s revealed that Ava’s father, Elihas (Michael Cerveris), used to be a colleague of Hank’s. Though Hank calls him a research-stealing traitor, Ava and Bill Foster (Laurence Fishburne) — Ava’s surrogate father and another one of Hank’s former colleagues — have a different story. They say that Hank abandoned Elihas while they were working together on researching quantum energy, leaving him to struggle through trying to get to the Quantum Realm and to die in the resulting explosion. I’m inclined to believe Ava and Bill, if only because Hank’s track record with regard to keeping friends isn’t exactly stellar.

Hank also doesn’t seem to feel for Ava’s predicament at all. To a certain degree, I get it: Hank wants to find his lost wife, Janet (Michelle Pfeiffer), and Ava is threatening to ruin any chance he has by using Janet’s quantum energy to restore her own body. But at the same time, unlike Scott and Hope, Hank doesn’t really seem to consider trying to find an alternate method to help Ava. As far as he’s concerned, Elihas was a traitor and so is Bill, and Ava’s being caught in the crossfire is inconsequential.

In a story that’s modeled on Elmore Leonard’s work — in which double-crosses are part of day-to-day life — the continued inspection of Hank’s less-heroic attributes seems to be pushing him ever closer toward villainy. For any other movie, it’d be easy to imagine him fully tipping the scale. But in Ant-Man and the Wasp, Sonny Burch comes in to prevent that from happening.

Once it becomes clear that Ava is more antihero than outright villain, Burch picks up the villainous slack. He’s there solely to help himself — that is to make a profit. He also serves as a blatantly antagonistic counterbalance to keep Hank from seeming too evil. With such a shameless, self-centered mercenary running around, who would ever look twice at Hank?

The catch is that Burch is a little too flamboyantly bad. Every other character in Ant-Man and the Wasp possesses a certain degree of nuance that’s absent from Burch, which, in the contemplation of the nature of evil, starts to draw Hank into the question of who Ant-Man and the Wasp’s villain really is. After all, Burch’s actions have only a surface-level effect on the ostensible heroes; he’s the character equivalent of a speed bump. Hank’s influence runs deeper.

Much of the conflict that drives both Ant-Man and Ant-Man and the Wasp would be null and void if not for Hank’s selfishness and disregard for others. The problems that he — or rather, Scott — has to deal with are of his own making. This doesn’t make him a villain outright (yet, at least). But there’s no question that the more we learn about him, the more it becomes apparent he’s had a supervillain’s effect on the lives of the people around him. (Even Hope could have been a supervillain, what with her initially cold demeanor and Darren-like yearning for her father’s approval. Plus, she’s sporting a very “Cate Blanchett in Indiana Jones and the Kingdom of the Crystal Skull” bob throughout the first movie.)

When Ant-Man and the Wasp comes to a close, the Pym family has been reunited, Scott is no longer on house arrest, and Ava is on the road to recovery. But even that happy ending can’t quite quell the doubts called into question about Hank Pym. Twice, we’ve seen him as the maker of his own misery and that of others. Going forward, it’ll be interesting to see if Marvel doubles down on the way Hank is a menace to himself as well as to those around him, or if it will sub in more straw villains so as to maintain the idea that Hank Pym is completely good.

Google and Amazon are now in the oil business
Science has been in a “replication crisis” for a decade. Have we learned anything?
NYT columnist Bret Stephens inadvertently explains why women don’t report sexual harassment
The new guilty plea in John Durham’s investigation, explained
Trump’s expert urged caution about a coronavirus treatment. Trump hyped it up anyway.
House Republicans joined Democrats in condemning Trump’s actions in Syria