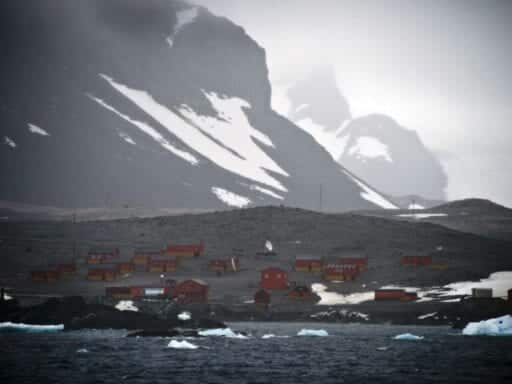 You could wear shorts in the Antarctic Peninsula right now.

The World Meteorological Organization (WMO) reported that Esperanza, Argentina’s research base on the Trinity Peninsula (the section closest to South America), detected the balmy temperature spike on Thursday. The previous record, 63.5 degrees, was set in 2015.

Esperanza Base at the Northern tip of the Antarctic Peninsula reported a daily high temperature of 18.3 °C (65 °F).

If confirmed, then this will be a new all-time record high temperature ever observed anywhere in the continent of Antarctica.https://t.co/MUtjvFTeBa pic.twitter.com/5X26B1is5s

“The record appears to be likely associated (in the short term) with what we call a regional ‘foehn’ event over the area: a rapid warming of air coming down a slope/mountain,” said Randall Cerveny, WMO’s weather and climate extremes rapporteur, in a statement.

Animation of T850 in °C (temperature at 850hPa) showing this heat wave over the Antarctic Peninsula. This will be followed tomorrow by an interesting foehn event according to GFS. https://t.co/IbZ2KFKuxM pic.twitter.com/J195ZAw1lY

It’s currently summer in the southern hemisphere, and even icy Antarctica starts to warm up as it receives uninterrupted sunlight through the season. However, temperatures usually don’t get much higher than 50 degrees.

On this rapidly warming planet of ours, the polar regions are heating up faster than the rest. Earth has warmed up by just over 1.8 degrees on average since the dawn of the Industrial Revolution, when humans began spewing heat-trapping gases into the atmosphere by burning fossil fuels. But the Antarctic Peninsula has warmed by 5.4 degrees in just the last 50 years.

That rising heat is particularly worrying because it’s fueling loss in the world’s largest reservoir of ice: the Antarctic ice sheets. If all the ice in Antarctica were to melt, it would raise global sea levels by 190 feet. It’s hard to know exactly how much Antarctica’s ice is contributing to global sea-level rise right now, but several estimates show that this ice could add upward of 16 inches of sea-level rise by the end of the century based on current rates.

The latest science also shows an acceleration in ice melt. Between 1979 and 2017, the annual rate of ice loss increased sixfold. This cold freshwater flowing into the ocean in turn is influencing weather patterns around the world in ways that scientists are still trying to understand.

Last month, 50-year-old climate activist Lewis Pugh swam in a river formed beneath the East Antarctic ice sheet to highlight the impacts of warming. Satellites this week have also detected new cracks in glaciers in Antarctica.

“Pine Island glacier, like its neighbouring Thwaites Glacier, has been dramatically losing ice over the last 25 years,” according to the WMO.

The opposite end of the world is also warming rapidly. In 2018, the Arctic experienced its heat wave in winter for the third year in a row. Together, these events show that a lot more heat and change are in store for the coolest parts of the world.