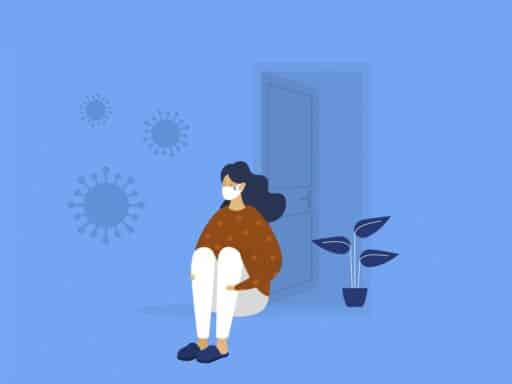 Survey data show the mental health strain of the pandemic.

Case numbers, positivity rates, deaths, and hospitalizations have become the go-to metrics for tracking the severity of the coronavirus pandemic. But one symptom of the pandemic, impacting both those who’ve had the virus and those who haven’t, has proven more difficult to quantify: deteriorating mental health. Perhaps because of this challenge, it has been largely absent from the messaging and response of public officials.

A close look at Centers for Disease Control and Prevention survey data shows that one measure of mental health is far more intimately tied to the state of the pandemic than previously imagined. In fact, their trajectories align almost exactly.

It is well documented that the coronavirus pandemic has taken a serious toll on emotional wellbeing. Rates of depression and anxiety in June were three to four times higher than at the corresponding point in 2019, according to the CDC, and deteriorating mental health outcomes have been similarly observed in nations across the world, among them the UK, India, and China. Rates of suicidal ideation, substance abuse, and alcohol consumption are steadily on the rise.

But the connection is even stronger than you might think in the US: As the number of new cases of the virus fluctuates week to week, our mental health moves in lockstep.

Data available from the Mental Health Household Pulse Survey, run by the CDC, offers a week-by-week estimate of the fraction of Americans who experienced symptoms of anxiety or depression between April 23 and July 21 of this year. Comparing this data to the weekly US coronavirus cases over the same time interval reveals an unmistakable trend: the incidence of depressive or anxious symptoms among Americans almost exactly mirrors the trajectory of the US coronavirus curve.

With an r2 value (a standard metric of correlation strength) of 0.92 between new Covid-19 cases and the incidence of anxious or depressive symptoms, the correlation between them is very, very strong.

It is always possible that any correlation could be coincidental rather than causal, or that the link could be more complicated than it seems. Indeed, June and July marked a period of increasing viral spread; one might speculate that, as the pandemic stretched on, public mental health could have correspondingly worsened simply as a function of time or some other factor.

Yet, data from the second phase of the Household Pulse Survey, from August through October, showed mental health continued to consistently follow fluctuations in the Covid-19 curve. After the scary viral spike in July, the number of weekly cases declined from roughly 450,000 per week at the end of July to roughly 250,000 by the end of August. And along with this period of slower viral spread, mental health outcomes markedly improved as well, reinforcing the relationship between the two.

We don’t know yet exactly why reports of mental health issues trace much of the coronavirus curve — whether it is cause and effect, the result of other variables, or some unlikely causal relationship in the other direction. For example, as people become more depressed and anxious, perhaps they seek social interaction more carelessly, generating infection spikes. And the points where the two curves somewhat diverge (e.g. June and late October) show that there are certainly other factors at play.

What is clear is that the rampant spread of the virus is having a major effect on mental health. Overall, the pandemic has raised America’s baseline levels of anxiety and depression: Even at its lowest point this summer (early May), the rate of Americans reporting symptoms of anxiety or depression hovered around 34 percent, roughly three times higher than the average of 11 percent reported in a parallel study between January and June in 2019.

Fluctuations above this already-high baseline could plausibly be caused, at least in part, by the severity of the pandemic at a given point in time. For example, elevated rates of viral spread directly increase the likelihood that we or someone we know will become exposed and undergo a mentally straining period of quarantining waiting for symptoms — or self-isolation while battling the new illness itself. The state of the pandemic also often determines things like freedom of mobility through lockdown measures or their absence.

Covid-19 messaging and policies have fixated on the standard numbers of cases and deaths. But these numbers alone miss out on the very real, very strong connection between the pandemic and our mental health, which is impacting far more people than have been infected with the virus. And it is not only a question of decreased quality of life. Anxiety and depression have been shown to be major drains on the economy as well.

Looking at these charts, it is clear that our mental health traces the coronavirus curve. And just as rising case numbers have had a crushing impact on our psychological health, whatever has led to periods of decreased viral spread (e.g. masks, distancing, and other smart policies) seems to have improved our mental health. Policymakers should take this finding to heart and respond to the pandemic with the emotional wellbeing of the public in mind.

Hearteningly, Biden recently appointed a nurse with mental health expertise to his Covid Advisory Board. Come January, in addition to enacting policies to curb viral spread, the administration should directly address mental health – for example, by continuing to seek out experts in psychiatry and mental health, expanding access to Telemental health services, and addressing the disproportionate effect of Covid-19 on mental health among marginalized groups such as Black and Latino populations.

For the sake of our own sanity, let’s continue to take this virus seriously.

Isaac Sebenius is a graduate student in the advanced computer science program at the University of Cambridge, where he researches mental illness by combining machine learning with biological data.