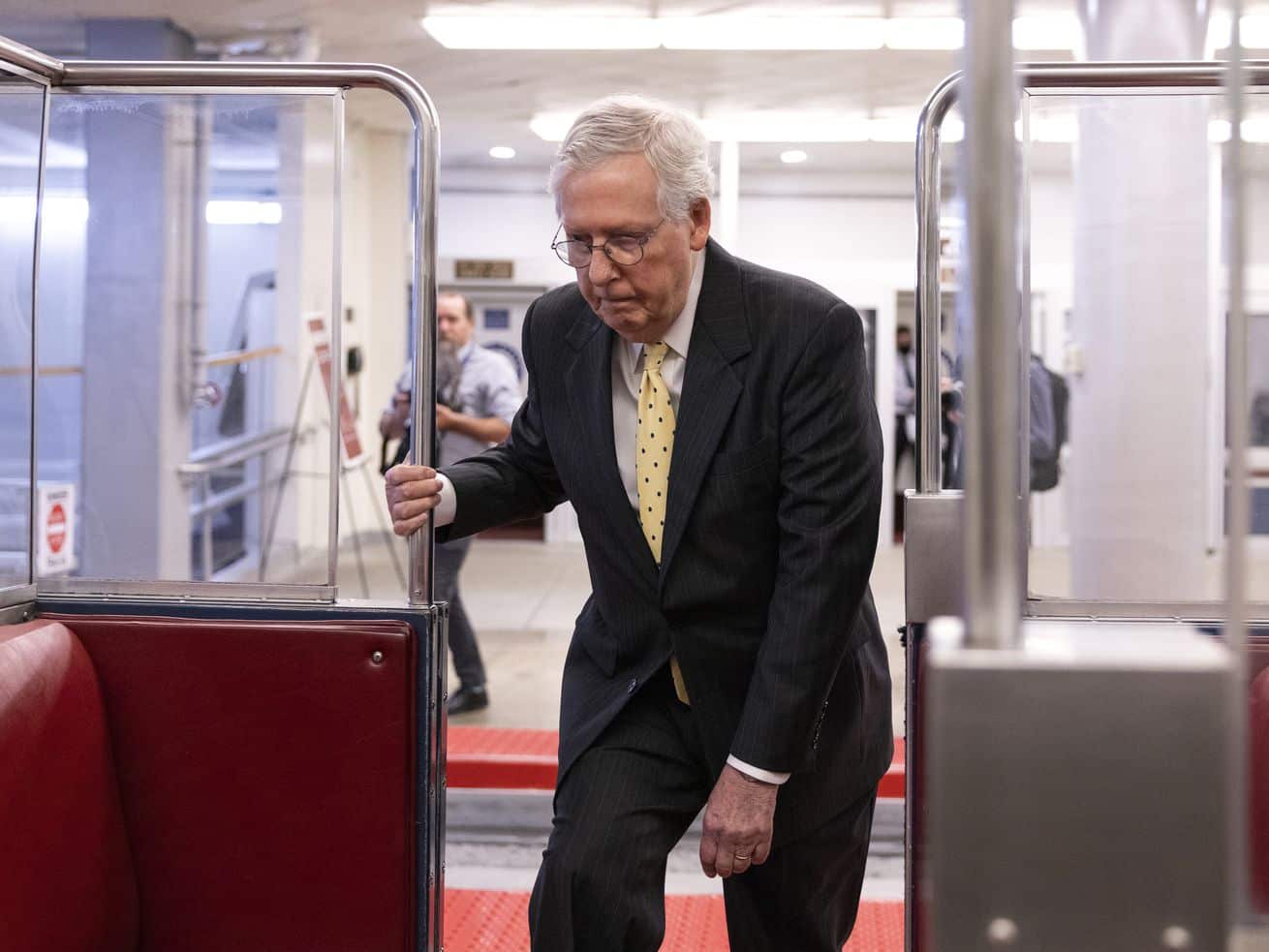 Even if it could pass, McConnell and McCarthy likely won’t appoint commissioners who would work in good faith.

Days after the chaotic storming of the Capitol on January 6, some Republican members of Congress had an idea.

What the country needed, Reps. John Katko (R-NY), Rodney Davis (R-IL), and others decided, was a bipartisan commission, akin to the one established after 9/11, to sort through the facts and determine just how such a terrible breach of government security happened.

Now, though, the chances for such a commission are imperiled. A bill to establish it passed the House last Wednesday with support from every Democrat and 35 Republicans. But most others in the GOP, including party leaders, have come out strongly against the bill, with the party’s senators planning a filibuster.

Republicans have evidently calculated that such a commission’s findings would likely hurt their party’s electoral prospects. Some even admit this: “Anything that gets us rehashing the 2020 election, I think, is a day lost on being able to draw contrast between us and the Democrats’ very radical left-wing agenda,” Senate Minority Whip John Thune told reporters last week.

But even if a deal does somehow come together, there are real reasons to doubt whether such a commission would achieve anything substantial.

There’s nothing magical about this proposed bipartisan commission — it would have the same formal powers as any ordinary congressional committee looking into the matter. In fact, its requirement for bipartisan support to issue subpoenas means it could well be less aggressive at unearthing new information than, say, a Democratic-only House committee investigation could be.

Its hoped-for advantage would instead be in the realm of messaging. The idea is that if such a body is deemed above politics, it could deliver an assessment of what happened that would be viewed as credible by both sides, shaping a national narrative.

This second aim is what supporters of a January 6 commission are really hoping to achieve. The hope is that, if the reasonable Republicans and Democrats could only get together, they could reach consensus and sagely explain how and why the Capitol was stormed, and how the US can stop something like it from happening again.

How the 9/11 commission “succeeded,” and why a 1/6 commission probably wouldn’t

The bill passed by the House is deliberately modeled after the 9/11 commission — it calls for 10 commissioners, five from each party, who would be appointed by congressional leaders. So that earlier body is a useful comparison, with lessons for how such commissions can come to be deemed successful, and what they actually achieve.

The first lesson is about PR. The 9/11 Commission Report was published as a 567-page book which became a best-seller, and in the discourse, it was often treated as the definitive assessment on what had gone wrong. But this was not really because the commission discovered a ton of new information (a joint congressional committee had already finished a report with largely similar facts), or because everything went smoothly (there were many politicized disputes and much important information was withheld).

One reason is that, as Philip Shenon (author of a book on the commission) recently argued in an interview with Just Security, the report was “packaged” better — many remarked that it read more like a novel than a policy document. Additionally, the two savvy moderate retired politicians in charge, former New Jersey Gov. Tom Kean, a Republican, and former Indiana Rep. Lee Hamilton, a Democrat, effectively became joined at the hip to tout the final product as truly bipartisan and credible.

But what’s crucial here is that, in the end, Kean and Hamilton wanted to tout a bipartisan product. This time around, from the start, Republicans oppose the very idea of the commission. Their appointees will be hand-picked by McConnell and House Minority Leader Kevin McCarthy, who are more likely to choose commissioners prone to obstruct and object, not to lend the eventual report a bipartisan halo.

The second lesson is about politics. The sunny view of bipartisan commissions is that members of both parties boldly manage to put politics aside and do the right thing for the country. The more cynical and probably more realistic way to look at them is that politics never truly leaves the process — especially when the issue has serious electoral implications for both parties.

The question of who in the US government deserved blame for the September 11, 2001 attacks had potentially monumental implications for both parties. Republicans had blamed Bill Clinton for failing to act against Osama bin Laden while he was president in the late 1990s, while Democrats had blamed George W. Bush for ignoring warnings in the advance of the attacks themselves. The report was crafted as Bush’s reelection was looming, and with widespread speculation that Hillary Clinton would run for president one day.

The 9/11 commissioners achieved bipartisan unanimity despite all this. But they did so essentially by ensuring the final report would be “balanced,” and wouldn’t single out either president for overmuch blame. Critics from either side would argue that the desire for bipartisanship resulted in something like a whitewash.

The storming of the Capitol is an issue with very different partisan dynamics, and it’s difficult to imagine what a “balanced” report on it could look like. Any broad and serious assessment of what happened only has a realistic chance of making one party — the party of Donald Trump — look bad. And Republicans have been very clear that, for electoral reasons, they don’t want to do this.

In practice, the commission would spotlight an issue that divides the GOP

Even though Republicans would likely be able to prevent a bipartisan 1/6 commission from achieving much of substance, they’d really prefer not to have one at all.

That’s because, as Thune admitted above and as Liz Cheney’s ouster shows, party strategists view any discussion of Trump’s attempt to overturn the election result as a harmful issue for their party at this point. They want to make the 2022 elections about Biden and Democrats, not Trump.

Parties prefer issues that unite their own members and put their opponents on the defensive. But on this topic, it’s clearly Republicans who are on the defensive. The GOP base is out of step with public opinion on this issue. So they’d really like it to just go away.

Democrats, meanwhile, have electoral incentives to try and keep the storming of the Capitol in the news however they can. “Democrats should spend every day tying all of it to the Republican Party,” political consultant James Carville recently told my colleague Sean Illing. (McConnell has reportedly been sharing that interview to argue that Democrats are motivated by politics here.)

So if electoral and messaging advantage is the true goal, the commission would still be worthwhile for Democrats. But feel-good bipartisanship isn’t in the cards, and fact-finding would probably be difficult too if the Republican commissioners agree to vote as a bloc against any controversial subpoenas.

Do Democrats have fallback options if the bill doesn’t pass?

In any event, theories of how such a commission would play out are probably moot, unless there’s a surprising sudden shift in Senate Republicans’ thinking.

Currently, there are a few Senate Republicans, like Susan Collins (R-ME) and Mitt Romney (R-UT), who sound open to supporting a changed version of the bill (Collins wants the staff to be bipartisan, and Romney wants to ensure that they’ll finish by their end-of-year deadline). Many others, though, are dug in firmly against the idea and seem immovable. So the current betting is that the 10 GOP votes needed to overcome a filibuster will not materialize.

What, then, can Democrats do instead?

It’s useful again to remember the two main things such a commission can do — fact-finding and narrative-shaping.

As far as formal fact-finding powers go, a congressional committee can do everything a bipartisan commission can do; namely, it can hold hearings and issue subpoenas. One advantage the commission might have is unified focus on one topic — but that could also be achieved by establishing a special “select committee” to investigate January 6, as House Republicans did for Benghazi.

In the House, Democrats have majorities on every committee, so they can issue whatever subpoenas they want. The story is more complicated in the Senate, where committees are evenly divided due to the chamber’s 50-50 split. According to an analysis from the law firm Covington & Burling LLP, the only senator who can unilaterally issue a subpoena without Republican support is Jon Ossoff (D-GA), who chairs an investigations subcommittee. It’s not entirely clear whether committees could potentially elevate blocked subpoenas to a full Senate vote, but it may be possible.

Still, as Norm Ornstein, at the conservative American Enterprise Institute think tank, recently pointed out in an interview with the Washington Post’s Greg Sargent, while “congressional subpoena power is theoretically extraordinarily powerful,” it’s clear that “practically it can be subverted fairly easily.” Ornstein added: “We’ve seen instance after instance of people defying subpoenas, taking it to court, and stretching it out for years.” In practice, as we saw with various hearings during the Trump years, congressional committees are most successful with willing witnesses who want to hand over documents or testify (often technically under subpoena for legal cover).

And when it comes to shaping the narrative, it does seem that congressional committees would, more likely, be deemed partisan by the media, as compared to a special bipartisan commission. But the hope to establish one consensus national narrative around the events of January 6 was always a pipe dream.

Most Republican voters now inhabit an information environment dominated by conservative media outlets like Fox and social media similarly designed to tell them what they want to hear. Acknowledging that reality, the most Democrats may be able to do is push on forward, trying to gather facts and make a public case to their best of their ability — on their own.