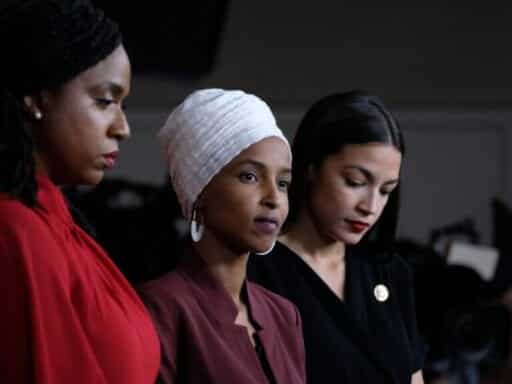 “Trump’s architect of mass human rights abuses at the border … has been exposed as a bonafide white nationalist,” Ocasio-Cortez wrote on Twitter. “He’s still at the White House shaping US immigration policy. Miller must resign. Now.”

He’s still at the White House shaping US immigration policy.

Ocasio-Cortez followed this tweet with a petition demanding Miller’s resignation that reads in part, “A white nationalist is currently serving as a top advisor to the President of the United States. In 2019. … This man cannot serve in the White House.”

Omar, who some critics accused of anti-Semitism for her rebuke of Miller (who is Jewish) earlier this year, also called for the official’s resignation. On Tuesday, she wrote, “As I said earlier this year: Stephen Miller is a white nationalist. … Miller needs to step down. Now.”

As I said earlier this year: Stephen Miller is a white nationalist.

And now we have the emails to prove it.

This type of racism and hatred has no place in our government.

Other Democratic leaders, including presidential candidates Sen. Bernie Sanders and former Secretary of Housing and Urban Development Julián Castro have censured Miller, with Castro calling him a “Neo-Nazi” who is “a shame to our nation.” And some, like Rep. Earl Blumenauer, argue Miller shouldn’t just resign, but that he should be “fired immediately.”

As Vox’s Nicole Narea has explained, over 900 emails Miller sent to a former editor of the alt-right site Breitbart while he served as an aide for then-US Sen. Jeff Sessions were analyzed by the Southern Poverty Law Center.

This analysis found more than 720 of these emails touched on race or immigration, and that these messages included links to white nationalist articles; the promotion of a white supremacist book that casts immigrants of color as savages who subsist on feces; and praise for President Calvin Coolidge’s nativist, hardline immigration policies in the 1920s.

As the mind behind the Trump administration’s immigration policy, Miller has gone from praising to Coolidge to emulating him, as Narea has explained:

The Trump administration’s policies, from its Muslim ban to its more recent attempts to force asylum seekers to pay application fees, have led critics of these policies to denounce them as racist.

And statements by Miller — and even the president himself — have done little to quiet these opponents.

Miller has told US Customs and Border Protection officials, “My mantra has persistently been presenting aliens with multiple unsolvable dilemmas to impact their calculus for choosing to make the arduous journey to begin with.”

Trump has reportedly said he wants fewer immigrants from “shithole countries” and that Haitians “all have AIDS,” while the US could use more immigrants from wealthier, predominantly white countries like Norway.

The White House has officially responded to the Southern Poverty Law Center’s (SPLC) report in a statement that reads, “The SPLC, however, is an utterly-discredited, long-debunked far-left smear organization that has recently been forced — to its great humiliation — to issue a major retraction for other wholly-fabricated accusations. They libel, slander, and defame conservatives for a living.”

And Axios’s Zach Basu reported a White House official signaled the administration may return to the rhetoric conservatives used when Omar first accused Miller of being a white supremacist; that official said, “This is clearly a form of anti-Semitism to levy these attacks against a Jewish staffer.”

In April, Omar’s accusation — which is now supported by these emails — was responded to by anger among conservatives; responses were largely variations of this Donald Trump Jr. tweet: “I see that the head of the Farrakhan Fan Club, [Ilhan Omar], took a short break from spewing her usual anti-semitic bigotry today to accuse a Jewish man of being a ‘white nationalist’ because she apparently has no shame.”

President Trump has not hesitated to hire those accused of being white supremacists before, including the man Miller was working for when he sent his hateful emails, former Attorney General Jeff Sessions, who was denounced by civil rights leader Coretta Scott King and who has been accused of making “jokes” like that the Ku Klux Klan “was okay until I found out they smoked pot.”

This would suggest that despite the emails, Miller is unlikely to be rebuked by his superiors — particularly his boss. Trump has referred to undocumented immigrants as committing “Murders, murders, murders. Killings, murders!” He famously called white supremacists “good people” following the violence at Charlottesville, Virginia, and allowed more recent opportunities to fully denounce white nationalism following racist shootings pass him by.

A reading list to understand police brutality in America
It turns out that Bernie Sanders’s chest pain was a heart attack
2 women were detained solely for speaking Spanish. Now they’re suing the Border Patrol.
The Supreme Court just held that a border guard who shot a child will face no consequences
The masterful deceit of “Toss a Coin to Your Witcher,” explained
Why election uncertainty is so hard to process, according to a psychologist