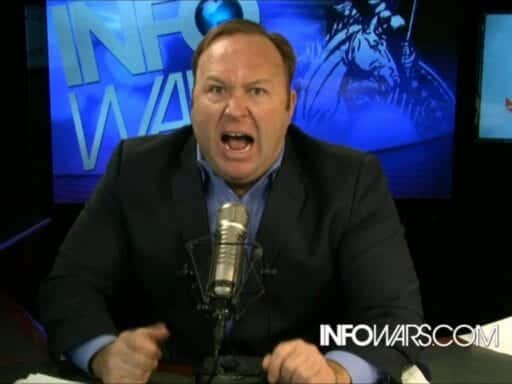 Within the past 24 hours, Apple, Facebook, and YouTube have all joined in summarily banning far-right broadcaster and known conspiracy theorist Alex Jones and his Infowars network from their platforms.

The bans have been swift and startling, coming after mounting public backlash against Infowars’ pernicious rhetoric, which is most notoriously responsible for helping popularize the false belief that the 2012 Sandy Hook Elementary shooting never happened. Jones is currently the defendant in a precedent-setting lawsuit brought against him by the parents of a Sandy Hook victim.

But the ongoing conversation around the real-life damage Jones and his network have inflicted has also been accompanied by weeks of hedging from major internet companies, including Facebook and Spotify, about how to deal with Jones on their platforms while still protecting free speech.

Initially, Facebook, YouTube, and Spotify all took selective action, banning some episodes of Jones’s podcasts and shows, or removing selected social media posts they found to be in violation of various policies while allowing Infowars channels to remain active. Last Thursday, the popular audio streaming app Stitcher became the first platform to pull all of Jones’s content, without a lot of fuss.

But on Sunday night, Apple followed suit, summarily banning all of Jones’s content from iTunes — and in the process, sending a definitive message about what is and isn’t permissible free speech. Almost immediately, the dominoes began to fall: In the hours since Apple took action, multiple sites have started scrambling to reverse positions they were defending just a week ago.

The most notable of these is Facebook, which abruptly about-faced on its own free speech policy just hours after Apple did, essentially in the middle of the night. After that came YouTube, which appeared to ban Alex Jones’s channel (which had more than 2.5 million subscribers as of Monday) from its platform late Monday morning.

BREAKING: YouTube has banned the channel used by Alex Jones and Infowars pic.twitter.com/SBak5m4rvg

Spotify, which spent last week under fire after it decided to remove only selected episodes of Jones’s shows from its streaming platform, has also followed Apple’s lead, removing its entire library of Infowars-related media.

The swiftness of these removals highlights a truth that many tech companies don’t want to fully acknowledge in an age of increased ideological polarization among their users: The idea of “protecting free speech” isn’t actually a hard-and-fast policy on their sites, but rather an increasingly handy excuse they can use to avoid taking controversial action.

That’s almost certainly why, as soon as Apple took the step of entirely banning Jones and his content, the cudgel fell: All of a sudden the more controversial action would have been to allow Jones and Infowars to remain. And so, sites that just a week ago were tentatively committed to protecting Jones’s “free speech” couldn’t about-face fast enough.

Facebook follows Apple in banning Infowars, giving up the game after weeks of sanctimonious lectures about free speech. This was always about being too scared to go first. https://t.co/dbAB2nPqZQ

In July, while attending a controversial journalist consortium hosted by Facebook whose participants included multiple far-right publications like the Daily Caller, CNN reporter Oliver Darcy asked Facebook News Feed director John Hegeman “how the company could claim it was serious about tackling the problem of misinformation online while simultaneously allowing Infowars to maintain a page with nearly one million followers on its website.”

Hegeman’s answer was less than clarifying: “I guess just for being false that doesn’t violate the community standards,” he said, adding that Infowars had “not violated something that would result in them being taken down.”

But the question of Infowars’ policy violations is not theoretical; it is a fringe broadcast network that has on multiple occasions propagated conspiracies with appalling real-world effects, from Pizzagate to the false belief that the Sandy Hook elementary school shooting was a lie.

The latter has resulted in multiple parents of Sandy Hook victims being extensively targeted online. Those parents include Lenny Pozner and Veronique De La Rosa, whose 6-year-old Noah was killed in the attack and who have since had to move seven times in the past five years to escape harassment from Sandy Hook “truthers” egged on by the unsupportable fringe rhetoric of Infowars.

Pozner and De La Rosa are behind the aforementioned lawsuit against Jones and Infowars, and its outcome stands to redefine the question of what “free speech” is, legally. But in the meantime, the lawsuit has galvanized the public conversation around the damage that Infowars has done — and merged with the ongoing conversation about Facebook’s responsibility for combatting the spread of fake news.

Facebook invited me to an event today where the company aimed to tout its commitment to fighting fake news and misinformation.

I asked them why InfoWars is still allowed on the platform.

I didn’t get a good answer.https://t.co/WwLgqa6vQ4

In a July interview, Kara Swisher of Recode — which, like Vox, is owned by Vox Media — asked Facebook CEO Mark Zuckerberg about the mentality behind the company’s policy of refusing to ban the presence of properties like Infowars, given its stated commitment to dealing with fake news. In response, Zuckerberg seemed to use the idea of protecting free speech to dance around the ethically blurry line of leaving his platform open to people who could spread harmful fake news and potentially dangerous views:

“The approach that we’ve taken to false news is not to say: You can’t say something wrong on the internet,” Zuckerberg said. “I think that that would be too extreme. Everyone gets things wrong, and if we were taking down people’s accounts when they got a few things wrong, then that would be a hard world for giving people a voice and saying that you care about that.”

Following this interview, however, backlash mounted over Zuckerberg’s comments, which included an attempt to explain why Facebook probably wouldn’t ban Holocaust denialism despite its repugnance. In response to criticism of what seemed to be Zuckerberg’s nebulous stance, Facebook temporarily suspended Jones himself — that is, his personal Facebook page — as well as four selected videos that the company deemed had violated its community standards.

Facebook’s selectiveness seemed to guide the other sites that subsequently took steps toward placing restrictions on Infowars. Both Spotify and YouTube chose to allow Jones’s channels to remain active while removing only the specific episodes of his shows and podcasts that they said violated their content guidelines.

Once Apple took a definitive stand, the dominoes toppled

Stitcher and Apple, however, took a less wishy-washy approach. On Thursday night, Stitcher responded to an angry tweet about Jones’s presence on the platform with a note that it had removed his podcasts.

Thanks for your note. We have reviewed Alex Jones’ podcasts and found he has, on multiple occasions, harassed or allowed harassment of private individuals and organizations, (1/2)

and that harassment has led listeners of the show to engage in similar harassment and other damaging activity. Therefore, we have decided to remove his podcasts from the Stitcher platform. (2/2)

And Stitcher didn’t have to wait long before another podcast platform joined with its position. Apple has never hosted Infowars on Apple Podcasts or iTunes, but its search engine included off-site listings for the podcast. Not anymore. As first reported by BuzzFeed, five Infowars podcasts were removed from Apple’s search index as of Sunday evening.

“Apple does not tolerate hate speech, and we have clear guidelines that creators and developers must follow to ensure we provide a safe environment for all of our users,” an Apple spokesperson told BuzzFeed Sunday evening. “Podcasts that violate these guidelines are removed from our directory making them no longer searchable or available for download or streaming.”

Despite Zuckerberg’s previous fence-sitting on the subject, Facebook was the first to move into action after news broke that Apple had entirely removed Jones’s library. Early Monday morning, the platform unpublished four of Infowars’ pages. “The timing of Facebook’s announcement was unusual, with the company confirming the ban at 3am local time,” the Guardian noted about Facebook’s early morning purge.

Facebook’s official statement on the removal noted that since its initial ban of four Infowars videos in July, “more content from the same Pages has been reported to us,” which the company found “violates our graphic violence policy, and using dehumanizing language to describe people who are transgender, Muslims and immigrants, which violates our hate speech policies.”

YouTube was next to fall in line, banning Jones late Monday morning by removing all of his channels. In a statement, a YouTube spokesperson told Vox, “All users agree to comply with our Terms of Service and Community Guidelines when they sign up to use YouTube. When users violate these policies repeatedly, like our policies against hate speech and harassment or our terms prohibiting circumvention of our enforcement measures, we terminate their accounts.”

YouTube had previously warned Jones by applying a “strike” to his account for content violation, as well as suspending Jones’s live-streaming privileges; however, Jones apparently continued to live-stream from his other channels despite the suspension — so YouTube ultimately saw fit to give him the boot.

Now that the pressure is on, many people are calling for Twitter and other social platforms to take action against Jones next. Pinterest, for example, has since pulled Infowars’ page, which apparently existed.

While I’m very glad that @Facebook, @Apple, & @Spotify have finally taken the step to remove Alex Jones & Infowars from their platforms, it’s past time that @Twitter & @YouTube step up.

They are spreading hate, lies, and violence.

So far, Jones is still a verified Twitter user, and multiple accounts related to various Infowars productions remain active. (Vox has reached out to Twitter for comment, with no response).

And Infowars’ reach is still mighty. Some media outlets have noted that despite Apple’s removal of Jones’s shows from its Podcasts platform, the Infowars app is still available on Apple’s mobile app store, where it currently has a 5-star rating. Similarly, Infowar’s 4.9-rated Android app is still available in the Google Play store (though its download count of 10,000 feels refreshingly small).

However, the online public seems to be celebrating the move, especially from Facebook and YouTube, as a definitive and crucial step forward in the fight against fake news and fringe extremism.

Aquaman first trailer: Jason Momoa is Earth’s only fish-whispering hope
Trump addresses rumors on whether First Lady's surgery was a facelift
George R.R. Martin promises fans he is staying safe and working on Winds of Winter
Lawmakers must now wear masks at all congressional hearings
Trump’s top Middle East peace envoy is quitting. There’s still no Israel-Palestine deal.
Should people of color get access to the Covid-19 vaccine before others?