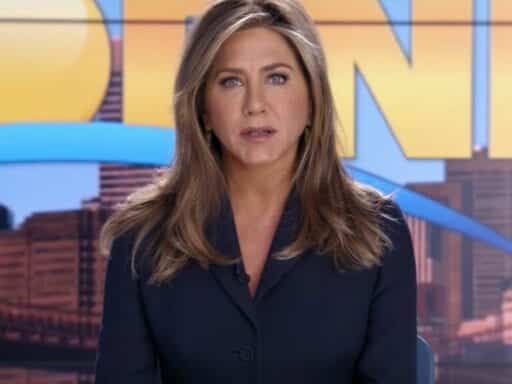 The Apple TV+ exclusive will pit Aniston against Reese Witherspoon and Steve Carell in a battle for the anchor chair.

It’s been months since Apple discussed what to expect from Apple TV+, its forthcoming entry into the premium streaming service Thunderdome. Now, with an apparent fall launch nearing (although no release date has yet been announced), the company has given us something more to chew on than just a laundry list of celebs — from Big Bird to Steven Spielberg to Oprah Winfrey — it plans to work with on its original programming: a full trailer for The Morning Show, which wrangles a cast of award winners for an adult take on the world of talk show television.

Reese Witherspoon both executive produces and co-stars in this drama, which is styled like you’d expect any prestige drama to be. There’s Reese in a lingering close-up; there’s her onscreen foil (and offscreen co-star/co-producer) Jennifer Aniston, staring warily at herself in the mirror. Steve Carell, who stars as Aniston’s disgraced, bitter nemesis of sorts, is introduced in a cold-toned living room, like a jail cell, screaming in anguish.

Carell has just lost his job as Aniston’s co-anchor on the titular Morning Show, a nationally beloved talk TV show à la the Today show, Good Morning America, etc. From the moment Aniston breaks the news of a scandal on air, things start spiraling out of control. It’s unclear what said scandal is, but the setup does immediately call to mind Matt Lauer, whose 20-year tenure as Today host ended in 2017 due to sexual harassment allegations. It’s difficult not to assume the show centers on the fallout of a #MeToo moment for Aniston — who, at least in the scenes in the trailer, can’t seem to keep her head above water as her producers come down harder on her while she tries to fend off suspicions that she has told a career-ending lie. Meanwhile, Witherspoon seems to be gunning for Carell’s open anchor chair … while Carell fights to return to it.

It all looks very dour, much unlike the façade that a typical morning show projects onscreen. Do we need another melancholy drama about the media in a landscape post-The Newsroom, Aaron Sorkin’s similarly joyless HBO series? Should we trust Apple to potentially take on a #MeToo fallout storyline in its first show out of the original programming gate? Apple seems to think so, but only time will tell.

The Morning Show is expected to premiere later this year on AppleTV+.