Apps for preschoolers are flooded with manipulative ads, according to a new study 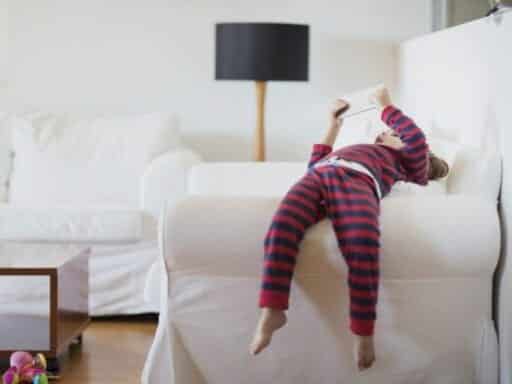 In the children’s gaming app Doctor Kids, a popular purchase in the Google and Amazon app stores, kids get to play doctor in a children’s hospital. They get to clean patients’ teeth as a dentist, straighten crooked bones inside an X-ray scan, and play optometrist by helping kids with blurry vision get the right prescription glasses, all against a backdrop of brightly colored characters and a twinkling soundtrack.

Until suddenly, the game is interrupted. A bubble pops up with a new mini game idea, and when a child clicks on the bubble, they are invited to purchase it for $1.99, or unlock all new games for $3.99. There’s a red X button to cancel the pop-up, but if the child clicks on it, the character on the screen shakes its head, looks sad, and even begins to cry.

The game, developed by the Slovenian software company Bubadu and intended for kids as young as 6, is marketed as “educational” because it teaches kids about different types of medical treatments.

But it’s structured so that the decision to not buy anything from the game essentially shames the child into thinking they’ve done something wrong. Pulling such a move on a gamer as young as 5 raises troubling ethical questions, especially as children’s gaming apps — and advertising within them — have become increasingly popular.

On Tuesday, a group of 22 consumer and public health advocacy groups sent a letter to the Federal Trade Commission calling on the organization to look into the questionable practices of the children’s app market. The letter asks the FTC to investigate apps that “routinely lure young children to make purchases and watch ads” and hold the developers of these games accountable.

The letter to the FTC, which the organization confirmed to Vox it received but would not comment on, was sent in conjunction with the publication of a study from the University of Michigan and the C.S. Mott Children’s Hospital in Ann Arbor that analyzed children’s apps. The researchers studied 135 apps means for children as young as 5, and found that these apps are riddled with problematic advertising methods, including manipulation and shaming.

“This is the first study to systematically explore just how commercialized the preschool app market is,” Josh Golin, the executive director of the Campaign for a Commercial-Free Childhood, which organized the groups sending the letter to the FTC, tells me. “What the study found is that the ads are extremely disruptive and often overwhelm the playing experience. That’s unfair to children and deceptive to parents who think they are downloading games which are educational. It’s fundamentally unfair to manipulate a young child who doesn’t understand what is happening.”

Researchers have found some troubling advertising tactics in preschool games

Today, children 8 and under average about two hours and 19 minutes a day of screen time, according to the safe technology nonprofit Common Sense Media, while kids 8 to 12 spend an average of four hours and 38 minutes. The time spent on screens has shifted dramatically since 2011, when the daily average for kids 8 and under was one hour and 55 minutes. Children are also more likely to spend more time on smartphones than on TV, computers, or video game systems, and 30 percent of American children start playing with electronic devices while they are still in diapers.

The American Academy of Pediatrics warns that the overuse of screens can put children at risk of problems like obesity and sleep deprivation. Studies are also finding that limiting screen time, unsurprisingly, improves brain function and academic performance in kids.

But the University of Michigan study is the first to look at exactly how many ads make their way into kids’ games, and what their advertising strategies are.

Researchers from the University of Michigan Medical School — led by Jenny Radesky, a developmental behavioral expert and pediatrician at the C.S. Mott Children’s Hospital — analyzed 135 children’s apps, many of which are the most popular ones at the Google Play store. The team found that 95 percent of the games have at least one ad, and many of those ads push the player to buy an upgrade within the game.

Many of these ads are specifically designed to look like part of the app. In Dentist Game For Kids from Edujoy, for example, a smiling cartoon tooth that looks like it could be a part of a game instead leads to an ad when clicked. In the game Talking Tom, from the Cypress company Outfit7, a present drops from the ceiling that looks like it’s a part of the game but is, in fact, a button that triggers an ad. In Olaf’s Adventures, from Disney, there are illuminated cakes placed inside the game’s winter wonderland that, when clicked on, ask the child to pay $3.99 to “protect Anna’s cake.” Other games continually push young players to buy things, whether it’s tokens, levels, or new characters.

The Michigan researchers write that this is problematic for children because they usually can’t tell the difference between an ad and the game itself.

Children “lack a meta-awareness about advertising and are unable to critically reflect upon their reactions to it,” the study finds. “ When advertisements are combined with rewards, both cognitive and emotional processes respond to persuasion. In the case of the gamified ads we documented — those involving watching ads to collect tokens or gameplay items — children under 6 years may be especially susceptible to this approach because of their responsiveness to positive reinforcers.”

Some gaming developers also fill their apps for kids with pop-up ads that interrupt play, and make the cancel button nearly impossible to find. In the letter to the FTC, the CCFC notes that “adults know how frustrating it can be when they cannot click on a small ‘X’ to close an ad, or can’t even find a place to click. It is particularly unfair to employ these tactics on young kids, whose fine motor skills are just developing.”

The Michigan researchers believe this type of deceitful marketing could be violating the Federal Trade Commission Act, which prohibits misleading advertising practices.

“Many of the games are falsely marketed as being ‘free’ when it’s actually often impossible to advance in the game without making in-app purchases,” Golin of the CFCC tells me. “These games are deceptive to parents and are particularly unfair to children.”

And emotionally manipulative tactics, like the way Bubadu’s Doctor Kids makes its characters cry when children don’t purchase anything from the game, can be especially deleterious to kids.

“Children are known to develop trusting emotional parasocial relationships with media characters and pay more attention to and learn better from familiar characters,” the study authors write. Games that encourage kids to buy through character encouragement, or discouragement, “may also lead children to feel an emotionally charged need to make purchases.”

It’s a questionable trade-off given that the evidence of these games’ educational value is mixed at best.

In a widely cited study from 2015, Temple University’s Kathy Hirsh-Pasek outlines how they can be a good source for children to cultivate the skill of active learning — if the games are developed properly, of course. But she also wrote how concerned she was with how many poorly designed, visually distracting children’s apps are on the market. The Michigan study concludes that apps that are inundated with distracting ads and pop-ups might undermine their academic value altogether.

The American Academy of Pediatrics holds that apps for children 5 and younger should have zero advertising. (It also has guidelines for limiting screen time and monitoring media use.)

As child and adolescent psychologist Richard Freed told Vox, “there’s too much money to be made” to not advertise to kids

But gaming, of course, is a huge business, and as child and adolescent psychologist Richard Freed told Vox, “there’s too much money to be made” to not advertise to kids. Candy Crush, the inescapable and ageless game, helped parent company King earn $1.99 billion last year. Markus Persson, the creator of Minecraft, is a billionaire (albeit an unhappy one); Microsoft spent $2.5 billion in 2014 to buy his company, Mojang, which continues to develop the game. Keith Chapman’s Paw Patrol empire, which includes the children’s gaming app Paw Patrol Rescue Run, generates more than $1 billion annually.

The techniques of these kids’ apps follow the wider playbook of big tech. In a 2015 paper developed by AdMob, the mobile advertising company owned by Google, the tech giant lays out a strategy it calls “hybrid monetization.” This method, which combines in-app purchases with strategically timed ads, is a precise formula that gets gamers to spend money, especially the non-paying ones who download the app for free. Tech companies are already employing psychologists to apply persuasive design to their inventions, where this new field of psychology is applied to make sure the tech being developed will get users hooked.

This all seems like fair game when trying to make money off adult gamers. But with apps that deploy this strategy for young children who are only just beginning to discover the world and their surroundings, the playing field is completely skewed.

The Federal Communications Commission has been regulated TV ads targeting kids since the ’70s. The FTC has guidelines for children’s advertising for digital companies, but it is constantly developing as the weird, wide world of the web evolves. Golin and the other members of the watchdog groups want the FTC to ask app developers to stop using manipulative advertising techniques on children, and to fine them if they continue. Golin also notes that there need to be “cross-platform rules” from the FTC.

While it might be hard for the government to actually enforce restrictions on giant gaming companies, Golin says Google and Apple should monitor their app stores, which makes sense considering these big tech companies might very well be the only ones that can rein in this type of behavior.

“Our findings show that the early childhood app market is a Wild West, with a lot of apps appearing more focused on making money than the child’s play experience,” Radesky, the Michigan study’s lead author, says. “This has important implications for advertising regulation, the ethics of child app design, as well as how parents discern which children’s apps are worth downloading.”

Looney Tunes’ slapstick violence and gender-bending rabbits, explained by a 4.75-year-old
Trump went to Louisiana to stump for local Republicans. He ended up attacking national Democrats ins...
Will summer camp be open this year? 4 directors weigh in.
What Google searches tell us about our coronavirus thoughts and fears
What we know about turnout for the 2020 Iowa caucuses
Jill Biden feels America’s pain