“Are you sure?” Trump’s Ukraine conspiracy theory was a bit much even for Fox & Friends 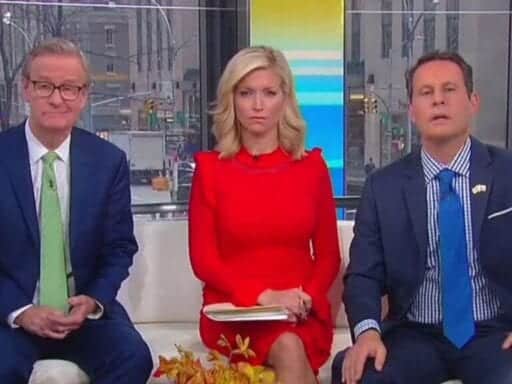 On Thursday, former National Security Council official Fiona Hill testified to impeachment investigators that the debunked conspiracy theory about Ukraine interfering in the 2016 election to hurt President Donald Trump is “a fictional narrative that has been perpetrated and propagated by the Russian security services themselves.”

About 24 hours later, President Trump called in to Fox & Friends and demonstrated once again that he has no qualms echoing Kremlin talking points.

During a typically meandering 45-minute interview with his favorite television show, Trump deflected from questions about Hill’s testimony by conspiracy-mongering about Ukraine.

“A lot of it had to do, they say, with Ukraine,” Trump said. “They have the server, right? From the DNC … they gave the server to CrowdStrike — or whatever it’s called — which is a company owned by a very wealthy Ukrainian, and I still want to see that server. You know, the FBI has never gotten that server. That’s a big part of this whole thing. Why did they give it to a Ukrainian company?”

Trump’s sourcing was weak, to put it mildly.

“They gave the server to CrowdStrike … that’s what the word is” — here’s Trump pushing the absolutely insane, debunked conspiracy theory that the DNC’s server is in Ukraine and that Russia was framed for interfering in the 2016 election pic.twitter.com/PXClTXfJhd

This isn’t the first time Trump has pushed this particular conspiracy theory. In fact, it’s part of what got him into this mess. You might recall he asked Ukrainian President Volodymyr Zelensky to do him “a favor” by investigating CrowdStrike and the DNC server during the July 25 phone call that is at the heart of the impeachment inquiry.

“I would like you to find out what happened with this whole situation with Ukraine, they say Crowdstrike … I guess you have one of your wealthy people … The server, they say Ukraine has it,” Trump said to Zelensky, according to a summary of the call released by the White House in late September.

CrowdStrike, for those who may not remember, was the cybersecurity firm that the Democratic National Committee (DNC) used to investigate hacks against it back in 2016. It concluded that Russia was responsible, a finding later backed up by the US intelligence communities, a bipartisan Senate investigation, and Special Counsel Robert Mueller. But Trump apparently still believes that his own intelligence agencies have it wrong.

CrowdStrike, in fact, cooperated with the FBI’s investigation of the hacks. But Trump has nonetheless repeatedly pushed baseless conspiracy theories suggesting information was withheld from the bureau because CrowdStrike didn’t turn over a physical server to the FBI, and was therefore involved in a cover-up that resulted in the Russia investigation. (This isn’t how servers work, and CrowdStrike is actually based in Sunnyvale, California, — not Ukraine.)

For a sense of how ungrounded in reality this “inside job” conspiracy theory about the DNC hack is, it’s worth pointing out (as Josh Marshall of Talking Points Memo did) that it’s part of the same universe of theories that holds that DNC staffer Seth Rich was murdered by a DNC-affiliated hit squad for leaking the emails to WikiLeaks. The ultimate implication is that Russia was framed for hacking Democratic targets and then using the purloined goods as part of a pro-Trump propaganda campaign.

But you don’t have to take my word for it. Even Trump’s former homeland security adviser, Tom Bossert, has acknowledged that Trump’s notions about CrowdStrike are “completely debunked.”

Trump’s comments to Fox & Friends about CrowdStrike, Ukraine, and the DNC server illustrate how deeply ingrained correction conspiracy theories are in his thinking. They’re particularly jarring coming as they did in the immediate aftermath of the dramatic testimony from Hill in which she seemed to preemptively debunk the president. They suggest that, despite the impeachment inquiry, Trump still wants the Ukrainian government to undertake investigations he originally tied to official White House acts, like a state visit and military aid.

But they were far from the only ridiculous assertions Trump made during his latest live TV interview.

“She wouldn’t hang my picture in the embassy”

When he wasn’t pushing conspiracy theories, Trump besmirched witnesses who testified to impeachment investigators, including former US Ambassador to Ukraine Marie Yovanovitch, who was pushed out as part of the shadow foreign policy that Rudy Giuliani was conducting.

Trump claimed that Yovanovitch, who testified on Tuesday that Trump’s efforts to leverage the Ukrainian government into doing political favors for him was “not a security interest,” is “not an angel” because “she wouldn’t hang my picture in the embassy.”

“She wouldn’t hang my picture in the embassy … it took like a year & a half or 2 years for her to get the picture up … this was not an angel, ok?” — Trump says one of his big beefs with Ambassador Yovanovitch was that she wasn’t eager to hang up his portrait pic.twitter.com/KJKjd2WKpX

That claim was almost immediately refuted by Yovanovitch’s lawyers, who told Geoff Bennett of NBC that “the Embassy in Kyiv hung the official photographs of the President, Vice President, and Secretary of State as soon as they arrived.”

At another point, Trump came uncomfortably close to copping to obstruction of justice by admitting he fired then FBI Director James Comey in May 2017 amid an active investigation of his campaign’s dealings because “they were coming after me.”

“I would have been in some trouble right now, because they were coming after me,” Trump said, musing about what would’ve happened had he not fired Comey. “It turned out to be the best move I ever made, firing Comey. Because they were looking to take down the president.”

Trump said he’s “standing with President Xi” when it comes to ongoing pro-democracy protests in Hong Kong. At another point, he seemed to have to restrain himself from threatening Intelligence Committee Chair Rep. Adam Schiff (D-CA), who is leading the impeachment investigation. He barely let hosts get a word in as he yelled about Hunter Biden. He said of Gordon Sondland, his current ambassador to the EU who gave $1 million to his inaugural fund and testified that there was a corrupt quid pro quo with Ukraine in which officials acts were being withheld pending the announcement of investigations, “I hardly know him.”

And through all of this, hosts — with the lone exception being Doocy’s “are you sure?” line — let Trump ramble away without correcting him.

Bernie Sanders and Jeff Merkley have a plan to protect you from facial recognition
Why a vote to close New York’s Rikers Island is being met with backlash
A new study from Rwanda is the latest evidence for just giving people money
Sen. John McCain’s complicated moral legacy on torture
Is it anti-Catholic to ask a Supreme Court nominee how her religion affects her decisions?
Elizabeth Warren blasts the plastic straw debate as a fossil fuel industry distraction tactic