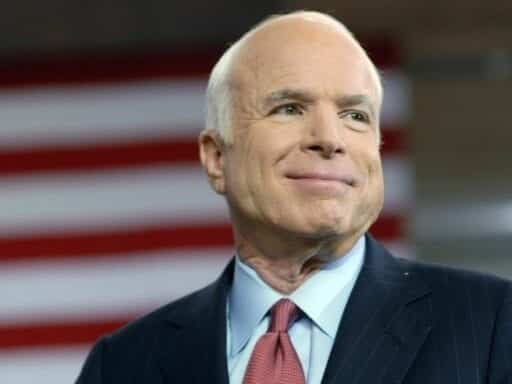 Many have complicated feelings about his legacy.

In Washington DC on Friday, thousands of people lined up in the sweltering heat to pay their respects to the late Sen. John McCain, whose body was lying in-state at the Capitol as part of a memorial service. McCain — the legendary Senator who represented Arizona in the upper chamber for more than three decades — is only the 31st person to ever be honored in this way.

Those waiting to commemorate the venerated Republican lawmaker came from across the political spectrum and used words like “hero,” “patriot” and “icon,” to describe him.

“He’s an American hero first and foremost. He was a lion of the Senate,” said Griffin Namin, a college student based in DC. “I think every child growing up should learn the story of John McCain. He truly is an icon for America, democracy around the world. Anyone who wants to learn about heroes should learn about John McCain.”

“I think he was someone who totally cared about our country, about the individuals who lived here,” said Brigid Banasiewicz, an Independent from Virginia Beach. “He’s a true patriot.”

Their assessments of his tenure marked a sharp contrast with those of some Arizona Republicans, who have much more complicated feelings about the legacy McCain left behind. While a number of Arizonan conservatives admire McCain’s bipartisan efforts and contributions to their state, it’s not exactly that clear-cut for all of his former constituents — many of whom said they wrestled with his critiques of Trump as well as the contentious vote he made on the Affordable Care Act last year.

As Vox’s Jane Coaston writes, these are some of the chief arguments that certain members of the Trump wing of the GOP have used to attack him in the past, objections that have been buoyed by the president’s bashing of McCain and his time as a POW. In conversations prior to McCain’s passing last week, Arizona voters detailed some of their thorny feelings toward his leadership, including concerns about his closeness with the Republican establishment.

“His legacy for Arizona is that over the years he’s gotten a lot of support from the establishment here in Arizona,” said Mariano Rodriguez, a Tucson architect, who applauded McCain’s work on the Armed Services Committee, but questioned some of his other contributions. “I don’t think he’s really done much for Arizona.”

“I think he’s a total swamp creature and I think it gets conflated with his military background. He gets propped up as a military hero,” said Chris Powers, a Prescott, Arizona resident. “A lot of people think highly of him because he has that R [for Republican] in front of his name. I’m of the opinion that that R means nothing.”

Ken Campbell, a retired sheriff who now helps run a shooting school in Paulden, said he wished the best for McCain, but noted that he was disappointed by his actions on healthcare. “I appreciate his service in the military and certainly his time as prisoner of war and his support for our veterans,” he said. “Having said that, when he voted ‘No’ when we were about to defeat Obamacare, I was done at that point with support of him… He does not represent my values and he does not represent my point of view.”

Reactions were mixed, with other Arizonans expressing their appreciation for McCain’s commitment to working across the aisle.

“I see a legacy of bipartisanship. We don’t really see a lot of reaching across the party line anymore to achieve compromise and I think that’s what he represents, at least to me,” said Derrik Rochwalik, the head of the Maricopa County Young Republicans, even while acknowledging that that exact bipartisanship may have been off-putting for some GOP voters.

“With his most recent comments about the president, that probably turned a couple people the wrong way,” he added. “Sen. McCain’s vote on the iconic healthcare reform vote may have swayed people.”

And despite deep rifts with his approach to policy, certain voters found it difficult to criticize his legacy.

“See, I’m not a big John McCain fan, but God you got to give him credit. He’s a senator, veteran, POW. I mean, I don’t see how you can badmouth him,” said Dave Dohnel, a resident of Surprise, Arizona. “I didn’t like what he did to Trump with the thumbs down. I think that soured a lot of guys on that side of the aisle. But, how you can say anything bad for John McCain?”

Meanwhile, in DC, most of the people who came to memorialize McCain felt like his healthcare vote and collaboration with Democrats was a quality that should unequivocally be celebrated.

David Hudock, a member of the military who lives in DC, called McCain’s bipartisanship “enduring,” and “inspirational,” noting that “he smacks of the older regime, old-school, when I think more politicians were willing to cross the aisle in order to accomplish business and govern.”

“To be honest, I wish I would see more of that today,” Hudock added.

2018 primaries: Voters have their say in Colorado, Maryland, Mississippi, New York, Oklahoma, Utah a...
A new first US coronavirus death, a “second wave” warning: Wednesday’s coronavirus news
Iran just fired missiles at US military targets. What does this mean?
Elon Musk’s not taking Tesla private after all
What we know right now about Covid-19 immunity and the end of social distancing
William Barr will give a press conference on the Mueller report Thursday. Here’s how to watch.