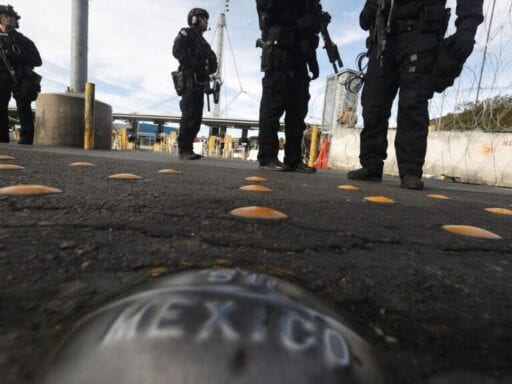 Share
Loading...
US Customs and Border Protection (CBP) agents stand on the U.S. side of the U.S.-Mexico border marker at the San Ysidro port of entry during a ‘large-scale operational readiness exercise’ which briefly closed the border crossing on November 22, 2018 in Tijuana, Mexico.  | Mario Tama/Getty Images

Trump’s policies are pushing migrants into Mexico instead.

The Trump administration has set out to prevent migrants from setting foot on US soil, and it’s working: The number of migrants arriving at the southern border fell again in November, marking a more than 70 percent decline since the peak in May.

US Customs and Border Protection apprehended 33,150 migrants and turned away another 9,139, a 6 percent drop from October and about 30 percent lower than last November. The agency can reject migrants who do not satisfy the criteria necessary to be admitted to the US, including those with criminal records or those who would likely rely on certain forms of government assistance.

Over the past year, the Trump administration has imposed a series of new hurdles for migrants and asylum seekers. The rules allow migrants to be sent back to countries with high levels of violence and have kept thousands waiting in makeshift camps at the US-Mexico border.

Under its “Remain in Mexico” policy, officially known as the Migrant Protection Protocols (MPP), the administration has sent more than 60,000 migrants back to Mexico to await decisions on their asylum applications.

The administration has also brokered agreements with the Northern Triangle countries of Guatemala, El Salvador, and Honduras, allowing the US to deport migrants both to the countries they came from, and passed through, on their way to the US. Only the agreement with Guatemala has gone into effect so far.

The Department of Homeland Security has issued a separate rule preventing migrants from being granted asylum if they passed through any country other than their own before arriving in the US, which means that asylum seekers from any country but Mexico are ineligible for asylum.

Mark Morgan, the head of US Customs and Border Protection, told reporters on Monday that there has been an increase in the number of Mexican families showing up at the border — and consequently, the administration has been experimenting with ways to keep Mexicans out.

In early October, the administration launched a secretive pilot program in El Paso specifically designed to decide Mexicans’ asylum cases quickly while they’re still in CBP custody. In September, CBP also started subjecting more Mexicans to its practice of “metering,” which limits the number of migrants processed at ports of entry each day.

Those initiatives have proved effective: Mexicans who were previously being processed at the ports are now turned away and forced to wait in the migrant camps on the Mexican side of the border, where migrant shelters are at capacity due to the metering that has affected immigrants from other nations.

The administration has also all but ended the practice of releasing families into the interior of the US once they are apprehended by CBP — what Morgan referred to as the practice of “catch and release.” Single adults, however, are still being detained and prosecuted for crossing the border without authorization.

It’s all part of the administration’s attempt to deter migrants from making the perilous journey to the southern border in the first place.

“Our message to economic migrants is clear – do not put your lives at risk and do not trust your families to smugglers,” Morgan said. “You will not be allowed to stay.”

But Texas Congressman Joaquin Castro, chair of the Congressional Hispanic Caucus, told reporters Tuesday that Trump’s quest to drive down the numbers of migrants arriving at the border is merely an attempt to “get rid of the problem without solving it” and has come “at the expense of humanity.”

”They’ve placed people in dangerous Mexican cities that the United States government advises its own people, us, not to visit,” he said.

Marijuana legalization is about to have a huge year
A Joe Biden fundraiser offers a new clue into how he might regulate Big Tech
7 provocative documentaries that show how our political process has evolved
Drug companies reach $260 million deal with Ohio counties over role in opioid epidemic
The US and Mexico made a trade deal. But it’s not a new NAFTA.
Is your cellphone giving you cancer? A comprehensive guide to the messy, frustrating research.