Artisanal brooms exist, and they cost up to $350 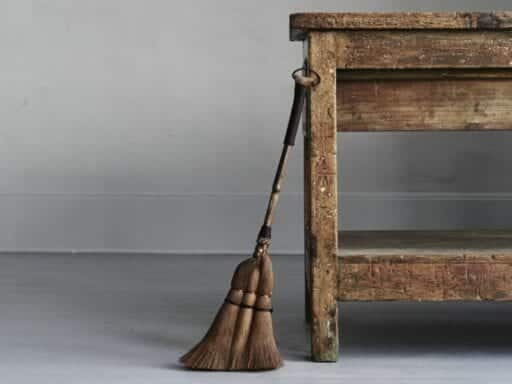 How much should you pay for an everyday household tool?

I bought my plastic broom in the frenzied cleaning portion of my last apartment move. The amount of time and energy I expended trying to decide which broom to buy lasted the duration of my walk to the local Duane Reade, plus the short trip to the cash register. It cost maybe $10.

This is one corner of the American broom market: the unromantic, inexpensive corner many of us are familiar with. For the same price, you could also go to Home Depot and get a humble, conventional version made from broom corn, the straw-like plant also known as sorghum that yellows as it ages. But work your way up the pricing scale — and onto the websites of artists and individuals who make brooms by hand — and you’ll find gangly brooms made from found wood, pleasingly curved hand brooms made from ash and horsehair, thick palm brooms imported from Japan, and classic Shaker brooms with gleaming, octagonal walnut handles. If you want, you can spend $70 or $95 or even $350 on a broom.

The people who make and sell these kinds of brooms say they want to see them in use, and hope that the brooms’ craftsmanship and elevated design will inspire owners to leave them out as decoration when they’re not being used to sweep the floor. But because of its functional (and often gendered) nature, the broom is an everyday object that kicks up a lot of sticky questions when it collides with the artisanal movement.

The complications run along two intersecting axes: price and design. How much should a broom cost? How much should a broom cost if it occupies the blurry space between craft and art? What does it say about divisions of wealth and labor when a person spends hundreds of dollars on a household tool only to hang it on their wall like a work of art? And if a person has no intention of using a broom to sweep their floor — if, say, they hire a cleaning service to do that work — is buying one an act of fetishization?

On the flip side, what’s it to us if someone wants to make cleaning their home a more pleasurable experience? Amazon is big enough; isn’t it a good thing to support individual craftspeople and slower, small-scale production?

It’s worth asking these questions because, anecdotally, I’ve noticed that friends and acquaintances have reactions to the idea of fancy brooms. Some are scandalized. Some are amused, because the thought of someone getting into small-batch broom-making in 2018 seems like a plot line out of Broad City or Portlandia. Clearly, there’s something there. What’s more, you could run the same arguments for any number of artisanal household objects. Brooms are just the example we’ll work with.

The case for the fancy broom

In the spring of 2017, Erin Rouse quit her job at the lighting design firm Lindsey Adelman to make brooms full time. She picked up the skill during her time in that job, which allowed employees to study in workshops around the world. She went to the Canterbury Shaker Village in New Hampshire, where she studied with a master broomsquire, the technical term for a broom-maker.

At $80 for a hand broom and $200 for a full-size version, which can reach $350 with a pleated skirt and handle cover, Rouse’s brooms aren’t cheap. Assuming all of her materials are prepped and ready to go — the process of cleaning and sorting by size a 100-pound batch of broom corn can take three or four days — she can make one in roughly two hours, plus the time required to trim the broom and sew a skirt and sheath. If she’s also dyeing the broom, that adds another five days to its production time.

The Brooklyn studio that Rouse shares with a handful of other artists houses a foot-powered machine that likely dates to the 1890s, which rotates a broom by its handle, allowing Rouse to build up its sweeping end layer by layer, and a heavy vise that stands at hip height. It clamps down on the broom, sandwiching a round bunch of bristles such that the broom-maker can stitch it into a more efficient flat shape with a large needle. This vise was a game changer when the Shakers developed it in the late 18th century, and resulted in the style of brooms most Americans know today.

Though Rouse uses traditional American broom-making materials and techniques, she sees her brooms as functional sculptures. She envisions lumpy wooden handles with “a sumptuous little belly,” a bizarre and wonderful mental image. She offers add-ons for her brooms, like fabric skirts and sheaths.

Having been in business officially for less than a year, and in a market that is by nature fairly small, Rouse is still figuring out who her customer is.

“So far it’s been women who are older than me, who are interested in design and interiors. It tends to be established professional ladies, and they’re buying them because it’s functional sculpture,” Rouse says. “I think the more candid clients will tell me that they’re going to hang it as a decoration, but I have sold brooms that people tell me are in use.”

Hannah Beatrice Quinn, a San Francisco-based broom-maker who started making brooms five years ago, says hers land best with an older audience too. Her customers are in their late 20s and early 30s at the very least — people with disposable income and homes they’re invested in. When younger people buy her brooms, it’s usually because they have a keen interest in design or art.

The complication of domestic work being perceived as women’s work is an active presence in Rouse and Quinn’s businesses. As a designer, Rouse wants to engage with that fraught history. Quinn, meanwhile, has noticed that male customers who want to buy a broom as a gift for a woman often question the appropriateness of doing so, worrying that it will send the wrong message about her role in society.

Beyond their symbolism, brooms are, of course, used for sweeping. And because cleaning is not a high-paying endeavor — whether it’s done for free by the person residing in that home or outsourced to a professional — price point is where the conversation around brooms gets tricky.

Rouse and Quinn don’t have the cost-saving benefit of large-scale production, and they are both conscious of the prices of their brooms. Rouse recently knocked hers down from $400 to $350 at the maximum, and started making the less expensive hand brooms because she wanted to offer something that her friends could buy. Quinn sells a smaller $32 version of her brooms, which cost $70 for a full-size version.

There are people willing to pay good money for a beautiful, well-made broom. Hilary Robertson, a New York-based interior stylist and set designer, is the target audience for that.

“I don’t really want to own anything that I don’t find beautiful, even if it’s a washing-up bowl,” Robertson says over the phone. “That’s my business, and the way I live.”

She recently bought one of Rouse’s brooms for her weekend home in Connecticut, an old schoolhouse with an extension. It has stone floors that get dusty very quickly, so Robertson needed a broom, and it has very little storage space, so she needed that broom to look especially good. Indeed, anyone who’s buying a luxury broom is doing so because they consider it part of their furniture, Robertson says. But that doesn’t mean it’s a choice lightly made.

Which, interestingly, is exactly what happened to my $10 Duane Reade broom. It leans against my refrigerator next to a Swiffer that gets all the action. I never use the broom; when I do, a fluffy mass of hair and dust bunnies gathers in its blue straws, many which stick out at odd angles, helplessly raking the air.

Why do we even care how much a broom costs? It is a known fact in the world of consumer products that if a thing exists, a wildly expensive version of that thing exists too. You can pay $1,650 for a pen. And yet when we’re not accustomed to thinking of an item as an indulgence, a luxury version of it trips our brain’s alarm system. This is why we’re appalled (and, in our horror, sometimes delighted) by Goop gift guides every winter, with their 18-karat gold, $125,000 barbells. How much more unrelatable can you get?

“Because there are brooms for $12 now that you can get on Amazon, people think it’s somehow inappropriate to buy something more expensive,” says Robin Standefer, co-owner of the Roman and Williams Guild in New York, which sells handmade brooms from Japan and Sweden. “I’m hoping to reframe some of that. It’s supporting a micro-economy — a global one with people making things for real use — and these are functional objects. It’s not some cultural prop.”

Standefer runs Roman and Williams with her partner Stephen Alesch. They’ve worked on interiors for some of the most recognizable hotels, restaurants, and clubs in the country: the Standard, the Ace, the Boom Boom Room. These are beautiful, expensive places, and the Guild sells beautiful, expensive goods, like $250 rabbit pillows, $400 glass vases that shimmer with subtle texture, and delightfully knobbly, polka-dotted $220 pots. But Standefer is plainly uninterested in selling brooms as art objects.

“They’re meant to be used, and they happen to be made in a rigorous way,” Standefer says. “We sell [our Japanese broom, currently sold out] for $82. People say we could sell it for $300, that it’s an art object. But when you do, you’re elevating it to a fetish object.”

That is exactly what she doesn’t want to do. Standefer is one of a vocal faction of people in the retail world advocating for goods that are better made and long-lasting, if more expensive. Her feeling is that these unbelievably well-made brooms can be used for decades, saving the shopper money in the long run.

To convince shoppers of the same, she priced the Guild’s brooms lower than she usually would, slimming their margins in favor of making them more accessible to people used to Amazon’s bargains.

“I really believe that you could have this broom for 20 years or more,” says Standefer. “Our consumer economy is about replacing things. This is a big reframing.”

What we’re willing to pay for is inevitably a matter of what we’ve been taught to pay for — what it’s in fashion to pay for. Right now, people are willing to shell out for ceramics classes (a balm for those who spend too much time on their phones and computers) and handmade ceramics, many of which cost much more than those brooms. Despite features this year in T magazine and on the Strategist, New York magazine’s shopping site, artisanal brooms aren’t quite there yet.

“I think a fancy broom is untested in the way that a very fancy ceramic vessel has been proven,” says Rouse when I ask whether she’s started wholesaling to any retailers (she hasn’t). “You can definitely sell a $1,200 vessel — you can probably sell out of them — but a $400 broom is a little riskier. That would be why I’m making all these hand brooms, so there’s a lower-priced product to prove demand.”

That’s why Standefer sets a lower profit margin on the brooms she sells: We don’t know intuitively that we want meticulously crafted brooms for our homes. But one day, maybe even in a not-so-distant future, we might.