As Australia burns, its leaders are clinging to coal 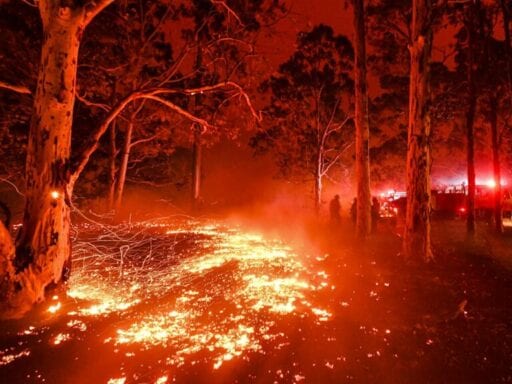 Australia is the world’s largest coal exporter, but its government is downplaying its contributions to climate change.

The devastating bushfires across Australia have cemented the fact that the country is on the front lines of a major climate-linked disaster, one that scientists saw coming and one that will only get worse from here.

The fires have already torched an area larger than West Virginia, destroyed 2,000 homes, and killed at least 26 people since igniting in September. The blazes clouded the skies above cities like Canberra and Sydney, creating some of the worst air pollution in the world. The swirling smoke is so dense satellites can see it from space.

Yet as the deadly flames continue to spread and smoke smothers major cities, Australia’s government is dismissing its own contributions to the problem.

Government officials continue to downplay the link between climate change and wildfires. Prime Minister Scott Morrison also said that the country doesn’t need to do more to limit its greenhouse gas emissions.

“Climate change is a global phenomenon and we’re doing our bit as part of the response to climate change — we’re taking action on climate change,” Morrison told the Australian Broadcasting Corporation in November. But he also said that “the suggestion that any way shape or form that Australia, accountable for 1.3% of the world’s emissions, that the individual actions of Australia are impacting directly on specific fire events, whether it’s here or anywhere else in the world, that doesn’t bear up to credible scientific evidence either.”

Morrison last week tried to walk back his stance while still dodging the question of Australia’s contributions to climate change. “There is no dispute in this country about the issue of climate change globally and its effect on global weather patterns, and that includes how it impacts in Australia,” the prime minister said at a press conference. “I have seen a number of people suggest that somehow the government does not make this connection. The government has always made this connection and that has never been in dispute,”

Morrison’s tepid language, however, shows an unwillingness to grapple with Australia’s dependence on fossil fuels and its status as a dominant player in global coal and natural gas markets. But as heat continues to mount, as fires spread, and as more destruction ensues, the need for Australia to limit its emissions will only grow more urgent. For Australian public officials, this portends a conflict between protecting the country’s powerful mining sector and protecting the environment.

We have an outbreak of murals.
Appearing faster than they can be removed.#ScoMoResign pic.twitter.com/DoKUXU3dK2

Australia is an outsized contributor to climate change

Australia accounts for 1.3 percent of global greenhouse gas emissions and is the fourth-largest coal producer, behind China, India, and the United States. But it’s the world’s largest exporter of coal and liquefied natural gas. Coal is now Australia’s most valuable export, valued at $46 billion in 2018. Australia’s LNG exports added $33.6 billion to the country’s economy in 2019.

That means Australia is one of the world’s biggest profiteers from fossil fuels, and it continues to increase its mining and sales. Including the emissions of these exported fossil fuels on Australia’s balance sheet pushes its share of global emissions up to 3.3 percent. And because its emissions are divided among just 0.33 percent of the world’s population, Australia has some of the highest per capita carbon emissions among major economies.

Australia, like many countries that have committed to reducing their emissions under the Paris climate agreement, must balance the needs of its economy and its labor force with its desire to reduce its contributions to global warming. But Australia’s politicians across the spectrum remain in the thrall of the country’s fossil fuel sector and have undone some of the few policies in place to fight climate change. In 2014, Australia repealed its carbon tax. More recently, members of both the governing center-right Liberal Party and the center-left opposition Labor Party have pledged support for Australia’s coal mining industry. Labor has even backed increasing Australia’s coal exports.

Yet Australia’s energy minister Angus Taylor argued in a recent editorial that Australians should be proud of their country’s efforts on climate change. “When you compare Australia’s emission-reduction track record with nations such as Canada and New Zealand — both commodity-exporting developed countries like Australia — we’ve done far better,” he wrote in the Australian in December.

Australia’s climate malfeasance isn’t limited within its borders either. At the recent United Nations climate negotiations in Madrid known as COP25, several delegates from other countries pointed fingers at Australia for blocking progress toward an agreement on major issues, particularly rules on developing international carbon markets.

“Australia should be sending a positive signal, and it should be setting a good example of reducing greenhouse gas emissions, moving to a zero carbon economy,” said Frank Jotzo, a professor of climate and energy policy at Australian National University. “Unfortunately, what we’re seeing is Australia actually going the other way and being seen as one of the countries that is putting sand in the gears of the international climate change framework and trying to slow down action rather than to accelerate it.”

The fires have put Morrison on the defensive. He was criticized for his lackadaisical response and for going on vacation to Hawaii in December as fires gathered strength. He has since apologized for the trip.

He also received a frosty reception as he visited fire-afflicted communities across Australia this month. Residents heckled him. One firefighter refused to shake his hand.

A firefighter who lost his home has refused to shake the Prime Minister’s hand during a tour of communities in NSW destroyed by bushfires. pic.twitter.com/Sc2AGwEWtn

In response, he announced the creation of a National Bushfire Recovery Agency this week, with initial funding of $1.4 billion. But local fire officials said they were concerned about the creation of a new federal department without their input.

And Morrison’s contention that Australia’s own emissions play little role in the fires is a red herring because Australia is contributing to a global problem that in turn has devastating local consequences. The Australian Bureau of Meteorology’s 2018 State of the Climate report showed that Australia is in the midst of a long-term warming trend as well as changes in rainfall that are raising the risks of wildfires near the country’s most populated regions. Australian researchers have been warning about the prospect of a disastrous fire season for more than a decade.

While police have rounded up dozens of arsonists suspected of igniting the recent round of fires, the growing severity and intensity of the blazes are being fueled by changes in the climate.

At the same time, the problems stemming from the blazes continue to mount: Australia now has to deal with internal refugees from the bushfires. “We are Australia’s first climate refugees,” Nick Ritar told the Sydney Morning Herald after he fled the flames approaching his home in New South Wales. “We are the first of many.”

So the long-term threat of more and more extreme weather in Australia demands more aggressive cuts to emissions or more drastic measures to move people out of harm’s way. And the longer the country waits to take action on either front, the worse the situation will get. The bushfires are a stark case in point of how the government was caught off guard and could end up in the same position in the future.

“If you had put up a scenario like we’re experiencing it now last year, you would have been laughed out of most rooms, or you would have been accused of putting up entirely unrealistic scenarios and stirring panic,” Jotzo said. “None of the government agencies, I think it’s fair to say, has had any scenario [planning] like what we see unfolding play through.”