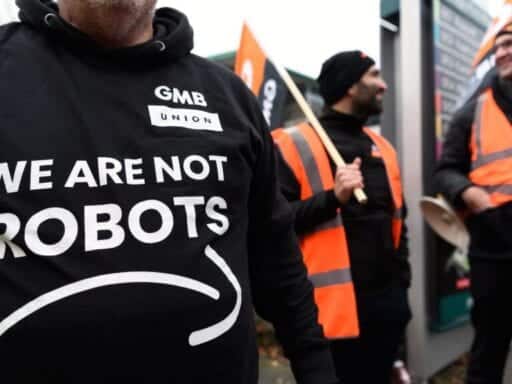 Employees at the Staten Island facility have signed a petition calling for increased break times and better transit benefits.

More than 600 workers at a Staten Island fulfillment center in New York, one of Amazon’s largest warehouses, signed a petition on November 25 — the week of the Thanksgiving holiday — to protest current working conditions. They called for increased break time (three 30-minute breaks during a 10-plus hour shift instead of two 15-minute and one 30-minute lunch break) and improved transit benefits to the facility.

This action coincides with a Gizmodo report published on the same day, which revealed how the Staten Island facility had alarmingly high injury rates compared to the national warehouse average. The data is obtained from Occupational Safety and Health Administration documents, and must meet a certain criteria of seriousness to be officially reported: death, loss of workdays, loss of consciousness, broken bones, or other injuries that can’t be resolved on-site.

A lawyer with the nonprofit Make the Road described the statistics to Gizmodo as “an injury crisis”: Amazon workers’ injury rates are over three times the industry average, although it’s unclear how these numbers stack up compared to other Amazon centers. According to OSHA documents, a worker is more likely to get injured at an Amazon packing facility in 2018 than a sawmill or a steel foundry.

Records obtained by the Center for Investigative Reporting also found that weekly injury counts spiked during Cyber Monday and Prime Day in 2018, periods in which Amazon offered special deals.

The Staten Island protesters are backed by the grassroots coalition Athena, a nationwide alliance comprised of three dozen activist organizations which include Warehouse Workers for Justice, Fight for the Future, Awood Center, and the Center for Popular Democracy. According to CNET, Athena has planned more protest activities for Black Friday and Cyber Monday — two major shopping events that come at the human cost of grueling labor. (Athena has not responded to an immediate request for comment from Vox.)

Last year, Amazon warehouse workers in Europe staged strikes and walkouts during those two holidays to protest wages and poor working conditions. Shopping holidays like Black Friday and Cyber Monday have migrated overseas from their American roots, thanks in part to Amazon, according to a 2014 report in The Economist.

If American employees choose to similarly disrupt their work schedules this weekend, the action would hurt Amazon during one of its busiest sales weeks.

“It is one of the days that Amazon has [the] most sales, and these are days when we can hurt more and make ourselves be heard because the company has not listened to us and does not want to reach any agreement,” a Spain-based Amazon employee told the AP in 2018.

Major shopping holidays are ripe days for Amazon labor protests, since the e-commerce site has demanded more and more from its workers. Workers have previously planned strikes on Prime Day, an annual 48-hour exclusive deals event for Amazon Prime customers in July.

As Vox’s Alexia Fernández Campbell reported in the lead-up to the 2018 Prime Day strikes: “Warehouse employees, who have long complained about punishing work conditions at Amazon’s fulfillment centers, are upset about the company’s recent decision to offer one-day shipping to Prime customers — putting unrealistic pressure on warehouse workers.”

(For this holiday season, Amazon told investors that it’ll spend an additional $1.5 billion to transition Prime members to one-day shipping, CNN Business reported. The company initially expected in April to spend $800 million for the initiative.)

The Prime Day strike, Campbell noted, was a bold move for American warehouse workers who had never organized a work stoppage during a major shopping event. Compared to their European counterparts, most Amazon workers in the US are not yet unionized. Their willingness to mobilize, however, hinted at workers’ desperation to have their demands heard.

Amazon employees in the US also hosted strikes for 2019 Prime Day and a walkout in September to protest the company’s environmental impact. These movements are part of a growing trend of tech workers publicly voicing their disagreements with employers, from issues such as ethics to labor policies.

It wouldn’t be surprising, then, if a coalition of workers do decide to stop work during the Thanksgiving holiday. For the most part, these strikes are successful and gain significant online attention from politicians, watchdog groups, and consumers alike.

While Amazon’s grip on American customers hasn’t waned, the e-commerce giant can’t seem to dodge the tide of political scrutiny and public opposition to its steady growth. Critics want to hold Amazon accountable for a spate of issues — for its environmental impact, labor policies, surveillance technology, and competitive business practices.

Doing so won’t be easy, activists admit, especially against one of the biggest companies in the world. A boycott won’t work; Amazon has too much money. Coalition partners from Athena told the New York Times they’re hopeful they can sway the opinion of employees and customers over time, especially since about half of US households will have Amazon Prime memberships this year.

There have been plenty of critics towards Amazon, yet the site’s Black Friday and Cyber Monday sales have continued to break records year after year. The movement against Amazon has been kicked into gear by workers, but if history is any indication, consumers might need more time and convincing before they’ll their sacrifice holiday discounts.