As conflict mounts at Syrian border, US will withdraw almost all its troops from the country 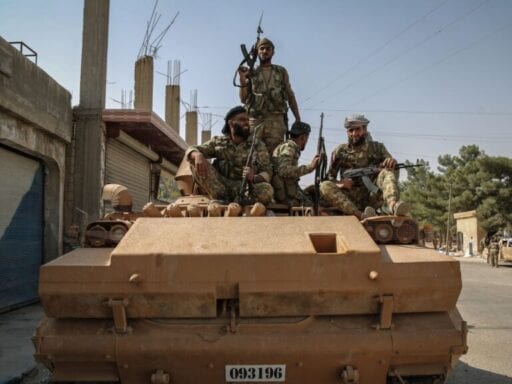 Roughly 1,000 troops will be withdrawn as lawmakers push for sanctions against Turkey.

A thousand US troops will be withdrawn from northern Syria as “quickly as possible,” Defense Secretary Mark Esper said on Sunday, a day after President Donald Trump approved the withdrawal that would almost completely eliminate the US military presence in the region.

Esper confirmed the withdrawal on CBS’ Face the Nation and Fox News Sunday. The news comes amidst an incursion by Turkish military forces into Kurdish-held areas of northern Syria that has led to displacement and alleged atrocities against civilian populations. These alleged atrocities include executions, like one shared in a video that appears to depict the roadside execution of a Kurd by a Turkish fighter or a Turkey-backed Syrian fighter.

Turkey entered northern Syria last week, shortly after the US withdrew about 50 US troops from the area. Trump justified that initial withdrawal by saying he wanted to decrease overseas military engagement. Turkey has said it hopes to establish a “safe zone” for the millions of Syrian refugees it has accepted during the Syrian conflict in an area that would extend about 20 miles into northeastern Syria. It also wants to push Kurdish forces it claims are aligned with terrorists further from its border with Syria.

The US and Turkey had been working together to police the Syrian-Turkish border, but following a call between Trump and Turkish President Recep Tayyip Erdoğan, that practice changed.

Only about 300 American soldiers will remain in Syria after this latest withdrawal, according to two US military officials who spoke to NBC News. Military officials have said that withdrawal was one of few options available to the US, because as Turkey ramps up its military engagement in the region, US forces would have become outnumbered and at risk of conflict with Turkish forces.

Critics have argued the withdrawal is not about protecting American troops, but about Trump making way for Turkish forces to enter into the region. They also accuse Trump of abandoning a key US ally in the fight against ISIS, the Kurdish-led Syrian Democratic Forces (SDF).

The SDF is considered by Turkey to be linked to Kurdish separatist groups that both the United States and Turkey consider terrorist organizations, and Turkish leaders have used this as one of their justifications for the offensive.

Also of concern for those critical of the Turkish action is the fact the SDF is in charge of a large number of ISIS prisoners. Trump’s former secretary of defense, James Mattis, said Sunday on Meet the Press that the removal of US troops could lead to ISIS’ resurgence.

More than 10,000 ISIS members have been held in SDF-run prisons, but many of the troops guarding those detention centers have left their posts in order to ward off the Turkish invasion. Some ISIS fighters have allegedly already escaped, and nearly 800 women and children affiliated with the terrorist group reportedly escaped detention on Sunday.

Beyond fears the Turkish operation could help ISIS are worries it will worsen the Syrian refugee crisis. The United Nations said that more than 130,000 people living in and around northern Syrian have been displaced as a result of conflict between Turkey and Kurdish forces, and added that an additional 400,000 civilians living in this zone may require aid. Turkey has reportedly already killed more than 20 Syrian Kurds, including at least one child.

Trump defended his decision on Twitter on Sunday, saying it was “very smart” not to get involved in a conflict at the Turkish border:

Very smart not to be involved in the intense fighting along the Turkish Border, for a change. Those that mistakenly got us into the Middle East Wars are still pushing to fight. They have no idea what a bad decision they have made. Why are they not asking for a Declaration of War?

In the meantime, he has warned Turkey that atrocities against Kurds and other ethnic minorities in the region would trigger economic sanctions. He has not, however, been specific about what those sanctions might entail or what red lines Turkey would have to cross to trigger them. This lack of clarity has angered even some of the president’s staunchest allies in Congress, some of whom have begun collaborating with Democrats to prepare their own sanctions packages.

The situation in northern Syria is increasingly dire

Reports coming out of Syria have been dramatic. Mortar has been falling on towns and cities along the border, and Kurds have fled some towns. Civilians, including at least one child, have been reportedly killed. The UN has warned of a growing number of displaced people, and as Vox’s Nicole Narea has reported, the Turkish operation could trigger mass displacement in a country already facing a refugee crisis: As many as 300,000 people could be affected in a country that has watched 6.6 million refugees flee, and that has seen another 6.1 million people become internally displaced since 2011.

Analysts have expressed concern that this new conflict could spill over the border into Iraq, sending tremors of instability across the region, and leading to a resurgence of ISIS. Fighters with the Kurdish-led Syrian Democratic Forces have reported that some imprisoned ISIS fighters have become free because security at their detention centers has waned during the conflict, although the US reportedly moved two high-profile prisoners out of the country in advance of the invasion.

Human rights observers have claimed that civilians have been executed in the days since Turkey entered northern Syria. On Saturday, pro-Kurdish demonstrations took place in Germany and France, and leaders from those countries have both said they will cease to export weapons to Turkey while this military engagement is underway.

Russia and Israel have also weighed in.

Russian Foreign Minister Sergey Lavrov, who has acted as a liaison to Damascus in high-pressure moments before, said his government will seek to “establish a dialogue between Turkey and Syria.”

“We have reason to believe that it is in the interests of both parties,” he said Thursday. “At the same time, we will negotiate that nevertheless the contacts will be established between Damascus and Kurdish organizations that reject extremism and terrorist methods activities.”

Prime Minister Benjamin Netanyahu of Israel, one of the only nations that supports the existence of an independent Kurdish state — a position that Turkey has stood strongly against for decades — said Thursday that Israel would offer humanitarian aid to the Kurds.

“Israel strongly condemns the Turkish invasion of the Kurdish areas in Syria and warns against the ethnic cleansing of the Kurds by Turkey and its proxies,” he said.

On Sunday, however, US Treasury Secretary Steven Mnuchin said that while the Trump administration is concerned about humanitarian issues, its overall goal was not to defend Kurds, but to pull the US out of “endless wars.”

“I think the analogy that everybody’s saying is, we’re abandoning the Kurds, like the Kurds are these longstanding allies,” he told ABC’s This Week. “Our role in Syria was not to defend land for the Kurds in historical issues. Our focus was to defeat ISIS.”

There is bipartisan support for sanctions against Turkey

Despite Mnuchin’s assertion, many lawmakers — including many Republicans — see the Kurds as key allies, and argue allowing Turkey to fight them will send a message to other potential anti-terror allies that the US cannot be trusted.

Trump attempted to head off this criticism with a tweet Monday claiming he would “destroy and obliterate” Turkey’s economy if they committed atrocities. But as Vox’s Alex Ward reported, congresspeople were not convinced.

Critics of Trump’s initial decision to withdraw troops from Syria came from both sides of the aisle, and have led to a bipartisan effort to design specific sanctions in response to Turkey’s actions.

On Wednesday, Trump ally Sen. Lindsey Graham (R-SC) and Sen. Chris Van Hollen (D-MD) introduced a bill in the Senate that would impose financial penalties on Turkey’s highest political leaders — including President Erdoğan — and military for invading Syria’s north. As Vox’s Alex Ward reported, the bill targets top Turkish leaders as well as its energy sector, an unprecedented move against a NATO ally:

Turkey’s energy sector would take a hit. According to the bill outline, it would target “any foreign person or entity who supplies goods, services, technology, information, or other support that maintains or supports Turkey’s domestic petroleum production and natural gas production for the used by its armed forces.”

There’s also a section about restricting travel for Turkish leaders to the US and filing reports, as well as a part on how humanitarian aid, medical assistance, election help, and intelligence sharing would be exempted. Still, if passed and signed by the president, the legislation would be a major hit on a NATO ally.

The sanctions could come off Turkey if the US certifies that it’s not unilaterally operating in Syria, meaning it either left the area or worked in tandem with the US. The administration has to make a determination on that every 90 days and report to Congress.

Sunday morning, Graham praised Trump for signaling support for the bill, saying “there is strong bipartisan support for such sanction’s and it is imperative that we do not allow Turkey’s aggression to lead to the destruction of a valuable ally — the Kurds – and the reemergence of ISIS.”

Turkey’s actions will only benefit ISIS, Iran, and Russia, and creates a nightmare for Israel.

Turkey is NOT acting as a good NATO ally.

Treasury Secretary Steven Mnuchin, who has overseen ramped-up economic sanctions against Iran, said on Sunday that the US is “ready to go at a moment’s notice to put on sanctions” against Turkey.

“These sanctions could be starting small, they could be maximum pressure, which would destroy the Turkish economy,” he said on ABC’s This Week.

.@jonkarl on the U.S. imposing sanctions on Turkey: “What are you waiting for? … This is a rapidly deteriorating situation.”

Sec. Steve Mnuchin: “You’re correct. It is moving quickly … we’re ready to go at a moments notice to put on sanctions” https://t.co/BvkB9h7oKz pic.twitter.com/T61PaHffq6

Sanctions could include shutting down US dollar transactions with the entire Turkish government, Mnuchin added, and he said a plan is ready to be put into action once approved by the president.

In the same tweet in which he acknowledged Graham’s sanctions efforts, Trump gave little indication as to whether he would order sanctions, noting “Turkey has asked that it not be done.” And he did not add any clarity to what would cause him to issue such an order. Instead, as the fighting rages on, he wrote, “Stay tuned!”

This sourdough recipe takes all day. That’s what makes it great.
Sandra Oh is the first Asian woman to earn a Lead Actress Emmy nomination
A third of Americans might refuse a Covid-19 vaccine. How screwed are we?
A positive antibody test doesn’t yet mean you’re immune to Covid-19
See the front page of the paper the Capital Gazette put out the day after a fatal shooting
2 winners and 3 losers from One Direction’s solo albums