As coronavirus cases surge, hospitals are beginning to be overwhelmed 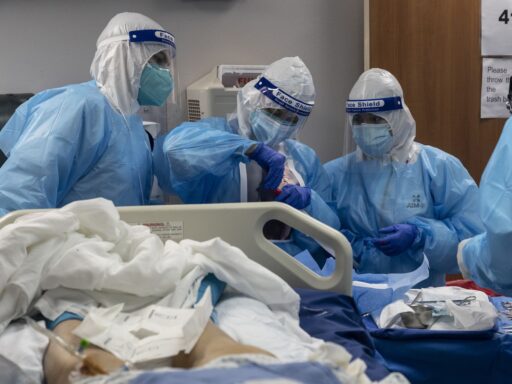 A new HHS report finds more than 1,000 US hospitals are “critically” short on staff amid a rising third wave of Covid-19 infections.

As confirmed coronavirus cases rise to their highest levels since the pandemic began, hospitals across the country are reporting critical staff shortages. And those shortages may only grow worse in the weeks to come, as thousands of the 1 million Americans diagnosed with Covid-19 in the past week begin to require hospitalization.

According to an NPR analysis of data released by the Department of Health and Human Services (HHS) this week, more than 1,000 hospitals across the country have been identified as “critically” short on staff as they face a dramatic third wave of Covid-19 infections.

That amounts to about 18 percent of all hospitals that report to HHS. In all, 21 percent of hospitals, representing 40 states and Puerto Rico, expect their staffing needs to increase in coming days. Seven states report shortages in 30 percent or more of their hospitals. North Dakota — which has one of the most severe coronavirus outbreaks in the US — is the worst-hit, with 51 percent of hospitals reporting shortages.

Nebraska, Virginia, and Missouri report expecting the largest upticks they’ve faced during the pandemic in the next week.

According to NPR, the HHS data is incomplete because many hospitals do not share staffing numbers with HHS. The agency has been collecting this data since July, but this is the first time it has released it to the public.

These staff shortages translate to exhausted and overworked doctors, nurses and other hospital employees, and also pose a risk that, as employees become sick themselves, there will be no one to cover for them.

Fear of overwhelming hospital systems was a large part of the “flatten the curve” messaging that accompanied the start of the outbreak in the United States in March. By keeping caseloads to reasonable numbers and admitting only the sickest patients to hospitals, medical experts explained, there was less risk of running out of bed space, ventilators, and other equipment central to the care of Covid-19 patients. It also meant that resources would be available for non-Covid-19 patients as well.

With hospitalization and case rates at record highs, hospitals could soon be out of staff and space

Ultimately, the curve was flattened — but with cases worse than they have ever been, hospitals are again in danger of running out of space, and of health care professionals.

As of November 20, 82,178 people were hospitalized with Covid-19, according to the Covid Tracking Project — far more than the previous records of nearly 60,000 reached in the spring and summer. And on November 20, the US hit a record high of 192,805 confirmed coronavirus cases, breaking the record of the previous day: 182,832 confirmed cases.

As Vox’s Dylan Scott has explained, hospitalization is what is known as a lagging indicator — this means the number of people hospitalized rises after, rather than alongside, an increase in infections: It can take days, or longer, for an infected person to need hospitalization after receiving a positive test result.

This means already burdened hospitals will likely begin to see an increase in patients infected last week in the weeks to come, and providers struggling with those new patients could be overwhelmed in mid- to late December should cases increase sharply following Thanksgiving.

At the moment, hospitals are nearing capacity. HHS estimates that as of November 20, 73.66 percent of all US inpatient beds are full (counting both Covid-19 patients and those seeking treatment for other illnesses), and that 60.62 percent of all ICU beds are occupied.

When the virus was more contained to several hot spots earlier in the year — in New York and New Jersey, for example — medical professionals from elsewhere, as well as from the US military, were also able to travel and provide short-term staffing support.

Now, with the virus so widespread, there are fewer health care providers able to leave one community and support another.

This has led to dramatic reports from local media across the country, as communities that previously saw few coronavirus cases begin to experience strain on their medical systems.

In North Dakota, where hospitals are at capacity, hospital workers have been told they may continue reporting to work even after testing positive for the coronavirus, so long as they are not exhibiting symptoms. (Covid-19 is contagious even in asymptomatic hosts.)

The University of Utah Hospital in Salt Lake City opened an overflow ICU two weeks ago, and officials there said it would be staffed by doctors and nurses working overtime. In Muskegon, Michigan, a recently-closed hospital has been reopened, and licensed nurses are being asked to come out of retirement to meet staffing and infrastructural demands.

And as the pandemic has begun surging in previously untouched parts of the country, rural hospitals, many of which lacked resources to begin with, have been especially hard-hit.

Rural hospitals reaching their capacity can have a ripple effect if nearby urban hospitals also become overwhelmed. As the Kansas City Star’s Jonathan Shorman, Sarah Ritter, and Matthew Kelly reported, Kansas City hospitals have “reached a tipping point where additional COVID admissions could trigger a crisis,” and may have to stop accepting patients from rural hospitals, leaving those patients with nowhere to go, and without any access to care.

Overwhelmed hospitals will almost certainly lead to more deaths. As Vox’s Julia Belluz has explained, medical professionals have become far better at treating Covid-19 patients than they once were, and the mortality rate has fallen:

Now, there’s strong evidence that common steroids like dexamethasone can reduce the risk of mortality in severely sick inpatients. Putting patients to rest on their stomachs instead of their backs (a practice known as proning) also seems to help.

Though there’s still a lot of progress to be made, the treatment approach has become more standardized over time, said Jen Manne-Goehler, an infectious disease doctor at Brigham and Women’s and Massachusetts General hospitals. When she started treating Covid-19 patients in the spring, it felt like practice was changing every few days. Now it’s more streamlined — and that’s undoubtedly helping with survival, too.

But to receive those improved treatments, patients must have access to doctors. And increasingly, it appears that access may be severely — and perhaps dangerously — limited in the weeks to come. HHS has plans to coordinate between hospitals to make up for staff shortages, according to NPR. However, if hospitals are overwhelmed throughout the country, finding the staff needed to save lives may not be possible, for hospital systems, or for the federal government.

Why Birds of Prey’s second-weekend box office numbers will be crucial
The Dixie Chicks make their triumphant return with the kiss-off anthem “Gaslighter”
A simple guide to CRISPR, one of the biggest science stories of the decade
The 2020 US House elections
Harris exposes how Barr reviewed little evidence before his obstruction decision
The Capitol riot is a reminder of the links between police and white supremacy