As immigrant children go without soap and toothbrushes, Trump and Pence say Congress is to blame 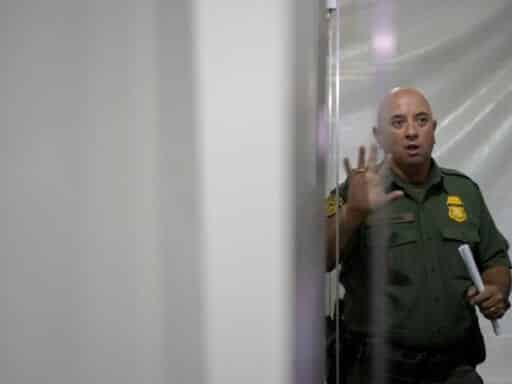 President Donald Trump and Vice President Mike Pence responded separately to criticism over reports that the government is not providing detained immigrant children with adequate food, water, soap, toothbrushes, or blankets. In three interviews that aired Sunday, both men blamed Democrats for the conditions at detention facilities.

Questions about the conditions detained minors are in began to arise following the publication of an Associated Press report that detailed the findings of a team of lawyers that toured a detention facility in Clint, Texas. The lawyers reported they found 250 infants, children, and teenagers being held without adequate access to food, water, or medicine. They also said they saw babies and toddlers being left in the care of slightly older children, and that there was poor access to areas for bathing, places to sleep, and to fresh clothes.

Pence told CNN’s Jake Tapper that he believes the government should “of course” provide children with basic amenities. But he blamed Congressional Democrats for the lack of sufficient bed space, arguing that they had stymied efforts to increase funding for US Customs and Border Protection (CBP) during the government shutdown last winter.

Tapper pressed Pence on the “horrific conditions” at the Clint detention center, where lawyers who visited the facility told stories of flu and lice outbreaks and minimal adult supervision. “It’s the worst conditions I have ever witnessed in several years of doing these inspections,” Warren Binford, one of the lawyers, told the PBS NewsHour.

“You’re a father. You’re a man of faith,” Tapper pressed the vice president. “You can’t approve of that.”

“No American should approve of this mass influx of people coming across our border,” Pence responded. “It is overwhelming our system.”

Speaking with Chuck Todd on NBC’s Meet the Press, Trump also said that Democrats were to blame for the poor conditions at the border.

“It looks like these kids are being used as, as some sort of — is it hostages?” Todd asked.

The Trump administration has defended these conditions in court

These interviews followed a viral video of a Justice Department attorney arguing before the 9th Circuit Court of Appeals that withholding basic amenities, like soap and toothbrushes, from detained migrants does not violate the government’s responsibility to provide “safe and sanitary” conditions to detained children, something established in what’s known as the Flores settlement.

In the video, published last week, one of the three appellate judges incredulously asks the lawyer, Sarah Fabian, if “there are circumstances when a person doesn’t need to have a toothbrush, toothpaste, and soap? For days?”

Fabian answered by arguing the Flores settlement was vague, making its language on providing children with safe and sanitary conditions unenforceable.

At issue is what the Flores settlement directs the government to do. The name comes from a 1997 federal court decision, Flores v. Reno, that created guidelines for keeping children in immigration detention centers. The Flores settlement requires that children be released to “responsible” adults as quickly as possible, that their detention conditions be as unrestrictive possible, that the conditions in which they are being kept are safe and sanitary, and that they be given basic necessities, like food, water, and medicine.

The settlement came back before judges in 2015, when lawyers argued that the Obama administration was violating immigrants’ rights. In filings during that case, they alleged dangerous conditions at holding facilities.

The judge in that case, US District Judge Dolly Gee, found that these conditions indeed violated Flores. The ruling was confirmed by the 9th Circuit in 2017, but the Trump administration has taken on an appeal, arguing the settlement doesn’t mandate the government provide children with toothbrushes and soap.

Fabian is one of the lawyers from the Department of Justice representing the government in this appeal.

And Fabian argued that the specific amenities in question — toothbrushes, soap, toothpaste, and blankets — were not itemized within the original settlement.

“One has to assume … parties couldn’t reach agreement on how to enumerate that or it was left to the agencies to determine,” she said.

Arguing on behalf of the detained children, Peter Schey, president of the Center for Human Rights & Constitutional Law, said “the plain meaning” of the words safe and sanitary needed to be honored.

“Today we have a situation where once a month a child is dying in custody,” he said. “Certainly the Border Patrol facilities are secure, but they’re not safe and they’re not sanitary.”

The judges did not rule on the issue, and did not say when they would before ending the session. However, clips of Fabian’s arguments were widely circulated on social media.

When Pence was shown one such clip by Tapper, he responded by saying, “I can’t speak to what that lawyer was saying.”

The Trump administration says only Congress can provide toiletries

During their interviews, Pence and Trump were pressed about why they couldn’t just find the money for basic amenities.

“This is the wealthiest nation in the world,” Tapper said to Pence. “We have the money to give toothpaste and soap and blankets to these kids in [the Clint facility]. Right now, we do.”

In that interview, and again when sitting with Margaret Brennan on CBS’ Face the Nation, Pence said that the funding had to come through an appropriations bill.

The Trump administration has tried to take money for immigration purposes without consulting Congress before, but it hasn’t worked well.

In March, after declaring a national emergency, the Trump administration attempted to move $1 billion from a Department of Defense personnel fund to use to build a section of the president’s promised border wall in a move it called “reprogramming.” As Vox’s Dara Lind wrote at the time:

Acting Defense Secretary Patrick Shanahan issued a letter to the Department of Homeland Security informing them that he’d made $1 billion “available” for wall construction, by moving it into a military account for drug enforcement — one of the three pots of money the Trump administration is tapping under its declaration of national emergency. (The logic is that the wall will impede drug-smuggling corridors, though all available evidence suggests that the majority of drugs smuggled into the US through Mexico come via official ports of entry.)

Leaders of the congressional committees overseeing the Pentagon that same day got notification of $1 billion in “reprogramming” — shifting funds from one government agency or account to another — from the military-personnel fund to the drug-enforcement fund.

However, as Vox’s Eric Kleefeld reported, that attempt was blocked by a federal judge in May who said that the executive branch was attempting to bypass Congress’ absolute control over appropriations:

“Congress’s ‘absolute’ control over federal expenditures — even when that control may frustrate the desires of the Executive Branch regarding initiatives it views as important — is not a bug in our constitutional system,” Gilliam wrote in a 56-page decision. “In short, the position that when Congress declines the Executive’s request to appropriate funds, the Executive nonetheless may simply find a way to spend those funds ‘without Congress’ does not square with fundamental separation of powers principles dating back to the earliest days of our Republic.”

The fact that the administration’s reprogramming for the wall was blocked does seem to suggest they would be wise to pursue a Congressional solution to the current lack of sanitation items. However, the May ruling was also somewhat limited, as it was brought to block the construction of a specific portion of the wall, meaning it could also be argued that a different judge might find reprogramming more Constitutional should the administration try it in a different context.

Queen & Slim retells the Bonnie and Clyde myth as a story about blackness in America
What to know before posting a photo of your kids on social media
The “smarter” wall: how drones, sensors, and AI are patrolling the border
Trump says there’s another tax cut on the way. We have no idea what he’s talking about.
How Trump could win the 2020 election through the Electoral College
What we can learn from quarantine videos around the world